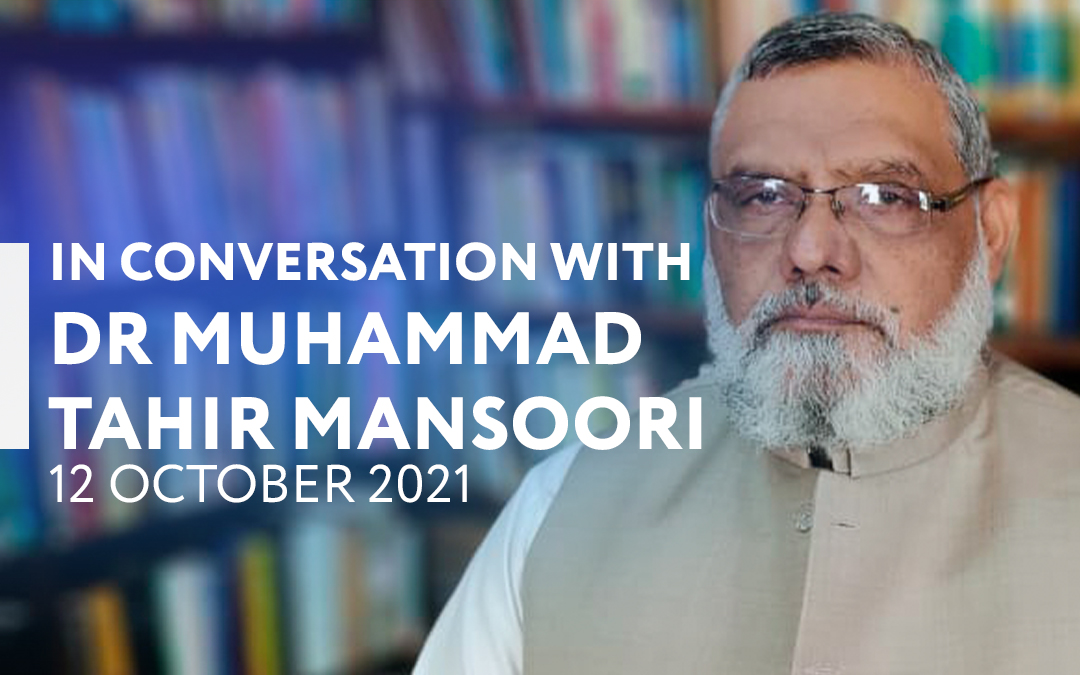 Dr Mansoori is a well-known and highly respected scholar within the community of Islamic scholars in Pakistan. He is currently serving as a Resident Shari’ah Board member for the Pakistani commercial and retail bank, Askari Bank Ltd., and also as a Shari’ah Advisory Board member for the Securities and Exchange Commission of Pakistan.1 Dr Mansoori holds Moulvi Alim and Moulvi Fazil degrees from Dar ul-Uloom Mansoorah and obtained his PhD in Islamic Studies from Punjab University. Before retiring in 2015, he served as the Faculty Dean of Shari’ah Law, and later also as Vice President, of the Islamic University. In 2004, Dr Mansoori was awarded the President’s Medal for Pride of Performance (in Academics) for his valuable contributions in the field of education.2

Since the creation of the now relatively mainstream cryptocurrency “BitCoin” following the Global Financial Crisis of 2008-2009, the question of whether digital currency is halal, or permissible, is a sensitive and complex issue that has been widely debated by the Muslim community worldwide. To understand and discuss the specific reasoning behind the lack of consensus on cryptocurrency in Shari’ah Law, and the question of whether the two could ever possibly be reconciled and deemed compatible in the future, the Chairman of the Commonwealth Chamber of Commerce, Ms Julia Charlton, sits in conversation with renowned Pakistani Shari’ah Advisor, Dr Tahir Mansoori.

Summarising briefly the background of the debate so far, Dr Mansoori explained that the financial activity related to cryptocurrency is separate from general banking in the view of Shari’ah due to its entirely different mechanism and decentralised nature; therefore, the Islamic community must assess it comprehensively from all aspects to interpret it effectively and fairly. As of yet, he explains, the overarching opinion amongst Islamic scholars is that cryptocurrency is hara’am, meaning impermissible, although 37 of over 2000 cryptocurrencies in the world are claimed to be Shari’ah compliant. Elaborating on this conclusion, Dr Mansoori explains that one must first understand the decision-making system of Shari’ah. Islamic decision-making is the responsibility of qualified Shariah scholars across the globe, called Muftis, that have spent significant portions of their lives studying the Qur’an (the Holy Book) the Ahadith (sayings of Prophet Muhammad (SAW) and Fiqh (Islamic Jurisprudence), establishing their credentials, and gaining the confidence of the Muslim community in their level of knowledge and interpretive skills. They can either be individual renowned personalities, or members of notable Islamic institutions such as the International Fiqh Academy based in Jeddah, the Muslim World League in Saudi Arabia, and The Accounting and Auditing Organization for Islamic Financial Institutions (AAOFI) among many more. When a topic of dispute is brought up, these scholars deliberate amongst each other and when a consensus on the topic is reached, they issue a Fatwa, which is a non-binding legal opinion that may become binding once the consensus is reached on that opinion. Fatwas are an extremely important aspect of Islamic divine law as  it is considered the will of Allah conveyed to the Muslim society via the Shari’ah scholars and is usually accepted.

Due to the decentralised decision-making nature of Shari’ah law, it is not uncommon for different schools of Muslim thoughts to have differing opinions. In the case of cryptocurrency, notables such as the advisor to Blossom Financial Mufti Abu Bakr of Indonesia and the Sharia Advisory Council branch of Malaysia’s security commission consider the digital currency as halal; whereas, Grand Imam al-Azhar of Egypt, renowned Shariah scholar and former Judge of the Supreme Court of Pakistan Mufti Taqi Usmani, and notable British mufti Shaykh Haitham al-Haddad deem it haraam. Mufti Zain Al Khair of Masjid Ramadan in London is inclined towards its permissibility, as he has declared that Muslims can pay obligatory zakat, through Bitcoin and Ethereum. He maintains that a money or currency is neither permissible nor impermissible. If money or currency is transacted in lawful manner, it is permissible. Dr Mansoorihimself, follows the approach of the international Islamic institutions such as AAOFI, International Fiqh Academy, and Muslim World League that have so far been silent on the matter, as they believe that until exhaustive empirical research is not done on cryptocurrency, the Muslim community must adopt a “wait and see” approach and only rule in favour or against, once it has become clear that cryptocurrency is either compliant or defiant of Shari’ah law. Justifying this neutral approach, Dr Mansoori argues that due to the ambiguous and speculative nature of digital currencies, and the potentially large impact they may have on the political, economic, and social characteristics of society, and perhaps even more hidden aspects yet unknown, no Muslim scholar can take on the burden to issue a fatwa and speak in the name of Allah about something they are not completely sure of, as the responsibility of the decision made for the entire world will then rest on their shoulders. As such, it is only logical for these scholars to learn more and make a more educated decision. Even current cryptocurrencies such as JaizCoin, Masoori argues, despite their comprehensive white papers, have not issued any fatwas on the matter.

Be that as it may, we here at the Chamber responded, what are the specific elements of cryptocurrency that are not compatible with Shari’ah law? According to Dr Mansoori, there are four specific criteria in Shari’ah that cryptocurrency must fulfil for it to be deemed permissible:

According to Shari’ah law, cryptocurrencies have no intrinsic value as they are not backed by any tangible assets i.e. gold, tradeable goods etc. therefore one can never be completely sure of the security and supervision of their assets. However, this argument is perhaps the weakest and easiest to rebut because the same may be said about fiat currencies currently used today.

One of the main contentions of Islamic law against cryptocurrency is the volatile, speculative and unpredictable nature of cryptocurrencies. Two years ago BitCoin was pegged at a value of US$12,000 which has today jumped to approximately US$62,000. Thus, any transaction in this digital currency will result in a net loss for the debtor and wide profit margins for the creditor and perhaps may even hold the risk of the debtor being unable to pay back their debt. In Shari’ah law, a lot of emphasis is put on the equality of transactions, protection and consideration of those unable to repay large sums of money; therefore, as long as cryptocurrencies remain volatile they are unlikely to be Shari’ah compliant. Some digital currencies, such as OneGram, that peg 1 digital currency equal to 1 gram of gold are going in the right direction to tackle this issue, says Dr Mansoori.

Cryptocurrency has yet to be recognised and adopted by governments across the world. This is because cryptocurrencies may be inconsistent with many taxation and monetary laws because of their unpredictable nature. If the government does not back the currency, or even deem it legal, then how are we to ensure the protection of the rights of those that use it for trade? In Shari’ah, all financial dealings have to be backed by the state as they are directly answerable for the financial well-being of the citizens. Currently, all Muslim majority countries have banned its use, and until and unless these governments decide to support cryptocurrency, it will never be deemed a legal tender. Even though the argument in favour of cryptocurrency of its transparency is one of merit, unless it is regulated by the government there is always a chance of it being abused for criminal purposes.

As per Dr Mansoori’s view, cryptocurrencies do not generate economic activity nor does they produce services that may benefit the general well-being of society. Cryptocurrency is bought only to be sold years later for-profit and even the access and use of this type of conjectural finance are limited to those that may be able to afford it. In Shari’ah any currency not accessible to the entire society is deemed unlawful as it creates further disadvantages for the poor. In Shari’ah, nothing that is accepted widely within the Muslim community can be considered legal. Although it is similar to the issue of whether the egg or the chicken comes first, until it is widely accepted it will not be considered lawful, and until it is considered lawful by Shari’ah advisor it may never be widely accepted. The focus must therefore be put on accelerating empirical analysis of the viability of cryptocurrency as a legitimate currency, and a proper Shari’ah-compliant framework for its usage and regulation must be set up to obtain credible fatwas to make digital currencies halal.

Although cryptocurrencies have not been deemed lawful as of yet, Dr Mansoori concedes that due to its transparency, low transaction costs, and the fact that it ranks 4th in terms of market capitalisation, there is no doubt that more and more people will lean towards digital currency usage. Giving an example of its private usage, he shares with us that although the State Bank of Pakistan banned its commercial use back in April of 2018, BitCoin rate updates are posted daily on relevant websites.

Dubbing cryptocurrency a “genie that cannot be controlled”, Dr Mansoori surmises that in the future cryptocurrency will become widely accepted and eventually acquire a fatwa of permissibility. This must, he reiterates, be done through exhaustive empirical research to ensure a completely Shari’ah-compliant framework with robust government regulation that protects the rights of the citizens.