Located in the eastern Caribbean Sea, the Commonwealth of Dominica is an island country of the Leeward Islands chain in the Lesser Antilles right between the French islands of Guadelope to the north and Marie-Galante to the south. It is known as the “Nature Isle of the Caribbean” for its natural beauty and because it is the most forested island of the Lesser Antilles which serves as a habitat for the large variety of animals and plants some of which, such as the mountain chicken frog, are native only to Dominica.

Topographically, Dominica is a cluster of massive peaks, ridges and ravines of volcanic rock formations and while the island nation has several active volcanoes it is rare for them to erupt. Because of the volcanic activity, Dominica has many fumaroles and hot springs spread across the territory for which they are famous, especially as a tourist attraction. From the north to the south is an expanse of mountains capped with dense forestry that are bisected in the centre by a plain that is drained by the Layou River flowing to the west. The two tallest peaks are located at Mount Diablotins (4,747 feet) and Mount Trois Pitons (4,670 feet). The capital of the island is Roseau located on the southwestern coast.

Dominica’s population in 2022 was recorded to be 74,629. Due to substantial emigration to other nations, the country’s population growth is modest. Much of the population is concentrated in the largest city and capital of Roseau, which has 16,500 residents and no other city has a population of more than 5,000 people. Most Dominicans are of African heritage (84.5%), with a considerable mixed-race (9.0%) and indigenous (3.8%) population. The island also has a small population Lebanese, Syrians, and Asians, who are descendants of Irish, British, and French colonists.

English is the official language. It is widely used throughout the Island, particularly in government, schools, and urban settings. French-based creole has been the oral

language of the rural population for centuries. The dominant religion is Christianity, Catholicism constituting 52.7% and Protestantism about 29.7%. Other religions practiced on the island include the denomination of the Jehovah’s Witnesses (1.3%) and Rastafarianism (1.1%) while approximately 10% of the population practices no religion. 34.5% of Dominica’s population is under the age of 30 and 71.7% live in urban areas.

The French first colonised the island in 1632 and continued to utilse the land’s resources while fighting with the local Caribs until they eventually migrated. Due to growing British interest in the island, the Treaty of Aix-la-Chepelle was signed in 1748 in which both powers settled on keeping the territory neutral and agreed to give it back to the Caribs. This agreement lasted until 1805 before the British and French began skirmishing over the land once more as French planters continued operations due to which the British retaliated and captured the island in 1763. The British initially administered the island as a limb of the Leeward Islands but in 1771 they decided to administer Dominica as a separate colony. French forces from Martinique recaptured Dominica in 1778 before they were repelled by the British in 1783. The French ordered their forces in Guadeloupe to attack in 1795 however this attempt, too, failed. The final attack by the French forces came in 1805 when they managed to burn the capital of Roseau but were ultimately defeated and driven away by the British forces.

The British rejoined Dominica to the Leeward Islands in 1833 until transferring it once again as a separate colony under the Windward Islands in 1940 and subsequently making it a part of the West Indies Federation in 1958. Within Dominica at the time, the formation of the Dominica Labour Party (DLP) from the People’s National Movement and other groups in the early 1960s spurred local demand for greater autonomy in internal affairs. Edward LeBlanc became Chief Minister in 1961. Under his leadership, in 1967 Dominica became one of the West Indies Associated States under the West Indies Act of 1967, with full internal self-government, while the UK remained responsible for foreign policy and defence. At LeBlanc’s retirement in 1974, Patrick John succeeded as DLP leader and Premier. After winning a large majority at the 1975 elections, John pursued the course agreed by the Associated States to seek independence separately.

On 3 November 1978, Dominica was granted independence by the United Kingdom as a republic within the Commonwealth and took the name of Commonwealth of Dominica. Patrick John became its first Prime Minister, and Frederick Degazon the non-executive President. During the 1980 elections, Eugenia Charles’ party, the Dominica Freedom Party, won majority seats and she consequently became the first female prime minister in the whole Caribbean region. Despite several coup attempts and natural disasters including two devastating hurricanes, Charles’ administration made notable progress in economic recovery and managed to considerably lower inflation and unemployment rate. Her popularity was showcased in her re-elections until she retired in 1995. During the subsequent elections later that year, the United Workers’ Party won and its leader, Edison James, became prime minister.

1838 Dominica becomes the first and only British colony in the Caribbean to have a black-controlled legislature.

1865 Britain replaces the elected assembly with one consisting of one-half elected members and one-half appointed.

1958-62 Dominica a member of the British-sponsored West Indies Federation.

1960 Britain grants Dominica self-government, with a legislative council and a chief minister.

1998 Government of Dominica announces plans to make the nation a principal provider of offshore financial services “not only in the Caribbean, but the world” 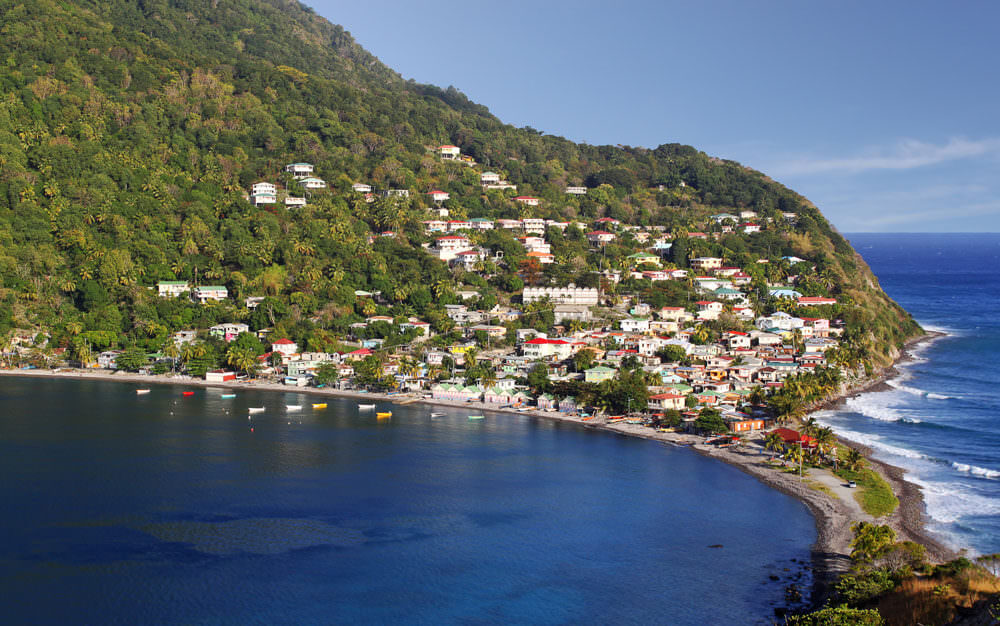 The politics of Dominica takes place in a framework of a parliamentary representative democratic republic, whereby the Prime Minister of Dominica is the head of government, and of a multi-party system. Executive power is exercised by the government. Legislative power is vested in both the government and the House of Assembly. The Judiciary is independent of the executive and the legislature.

The Eastern Caribbean Supreme Court consists of the High Court of Justice and the Court of Appeal. The High Court has 16 judges, one of whom is permanently resident in the country and sits in the court of summary jurisdiction. The district magistrates’ courts handle less serious cases. There are three magistrates’ courts, with appeal made to the ECSC.  The Court of Appeal is itinerant. The High Court’s jurisdiction includes fundamental rights and freedoms, and constitutional issues. In 2003 Caribbean leaders ratified a treaty establishing the Caribbean Court of Justice.

Currently, the services sector contributes 56.1% of the share in Dominica’s GDP and employs 28% of the nation’s workforce with the main service sectors being financial services and tourism, particularly eco-tourism due to the country’s rich biodiversity and beautiful rugged topography. Agriculture is the second largest sector, contributing 17.3% of the GDP and employing approximately 40% of the national workforce. 22.6% of Dominica’s territory is arable land and the production of bananas, citrus fruits, coconuts and bay oil make up the main export items whilst the production of vegetables and other fruits is primarily used for local consumption. Manufacturing and industry contributes 11.8% of the GDP although it has been on an upward trend due to the potential of Dominica’s timbre and mineral water manufacturing as well as the developing agro-processing industry. Currently, coconut oil-based soap production, boat building, garment assembly and packaging are the mainstays of the sector that employs a bit under 5% of the workforce.

In 2021, Dominica’s GDP was recorded to be US$0.55 billion dollars with an impressive rebounding growth of 6.8% in GDP following a -16.6% plunge the year prior. Top exports for the year were optical, medical/ surgical, measuring, precision-checking and cinematographic instruments (16.0%), pharmaceutical products (12.2%), electronic machinery and equipment (11.2%) and salts, sulphur, earths and stone, lime, cement and plastering materials (7.6%). These exports were largely procured by Saint Kitts and Nevis (27.8%), Jamaica (16.7%), Trinidad and Tobago (9.8%) and Guyana (8.3%).

The main imports for the year were mineral fuels, mineral oils and products of their distillation which altogether made up 64.4% of the total imports volume; other notable exports included unspecified commodities (6.0%), machinery and mechanical appliances (3.2%) and electronic equipment (2.2%). The top import source-countries included the United States (36.2%), Trinidad and Tobago (15.6%), Curaçao (7.2%) and the UK (4.2%).

Dominica is a member of the Caribbean Community and Common Market (CARICOM) and the CARIFORUM-EU EPA.

With abundant natural resources, fertile soil most suitable for high-value cash crops, skilled labour and ideal proximity to both US and European markets, Dominica is one of the most ideal locations for foreign investment ventures.

The nation is on track to becoming the first ever climate-resilient nation by 2030 and is prioritising investments in the development of modern renewable energy systems that can also be retrofitted to public infrastructure including hotels, factories and office buildings. The government is also focussing on creating sustainable methods for downstream industries such as milk pasteurisation, food processing and leather garment-making; incentives for the sustainable energy industry include import duty and VAT exemptions for the importation of green equipment and accessories, tax holiday of upto 15 years, 100% profit repatriation and exemption from withholding tax payments amongst others. Another area of interest for foreign investors is ecotourism; Dominica is a paradise in terms of biodiverse habitats and breath-taking natural beauty which the nation is striving to protect. While the nation has many world heritage sites, popular water sport spots and other tourist attractions such as the second largest boiling lake, the nation is also developing ways to increase the area of forests and natural habitats under official governmental protection (currently at 20%) and is also making efforts to preserve the territories belonging to the indigenous populations. As such, ecotourism, including the construction of accommodations, restaurants, spas, shopping centres and sports areas are lucrative areas of investment for foreign investors provided they are willing to take the necessary precautions to conserve and protect the environment. Incentives for such investment ventures include duty-free importation of building materials, fittings, appliances, equipment and fixtures; VAT exemptions on capital imports; corporate income tax and withholding tax exemptions and 100% profit repatriation.

Other important areas of development where the government of Dominica is seeking investment includes the manufacturing sector, more specifically in the manufacturing of bottled water, agro processing, teas and beverages, condiments, packaging and marketing and marine based, saltwater and freshwater aquaculture. Similar to the incentives for sustainable energy and ecotourism investments, tax incentives for manufacturing include duty-free importation, VAT and corporate tax exemptions and additionally income tax credit with respect to capital expenditure related to the construction, acquisition, or improvement to an asset, if a tax holiday is not being applied. For foreign investors looking to settle on the island nation, the Dominica Economic Citizenship program has been available since 1993 whereby foreigners may gain citizenship by investment by investing a minimum of US$100,000 to the national Economic Diversification Fund.