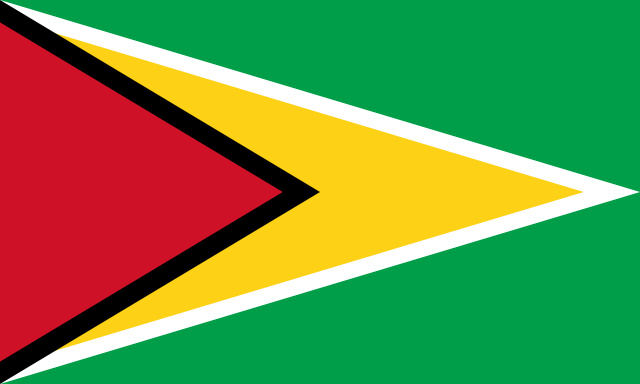 Guyana located in the north-east of South American continent, shares its borders with Venezuela to the west, Brazil to the south, and Suriname to the east. The nation is the third-smallest country in South America. Its capital, Georgetown, looks onto the Atlantic Ocean on the country’s northern border and is known to host the Caribbean Community (CARICOM) headquarters.

The country gets its name from the term “guiana” used by the indigenous population before settlement, which means “land of water”. The country has three well defined regions; to the north is a low-lying coastland comprising of swampy silt and clay approximately 5 and a half feet below sea level at high tide; to prevent floods from overflowing ocean water, man- made concrete and mud walls have been constructed with sluice gate canals in between to allow drainage to the sea. The intermediate region to the east and south is the largest of the three regions, consisting of coastal and mountainous areas of tropical rainforests and jungles with the exception of the Rupununi savannah on the southwestern border with Brazil. Large rivers and their tributaries flow throughout the region creating a lattice like structure of waterways that also include rapids which prevent settlement along their path; the most notable rivers include the Demerara, Berbice, and Corentyne Rivers. To the western boundary is the Pakaraima Range located between the Waini and Rupununi Rivers. The Kanaku Mountains also lie in this region and stretch towards the border with Brazil; a sandstone plateau which is 9,000 feet above sea level can also be found in this region. 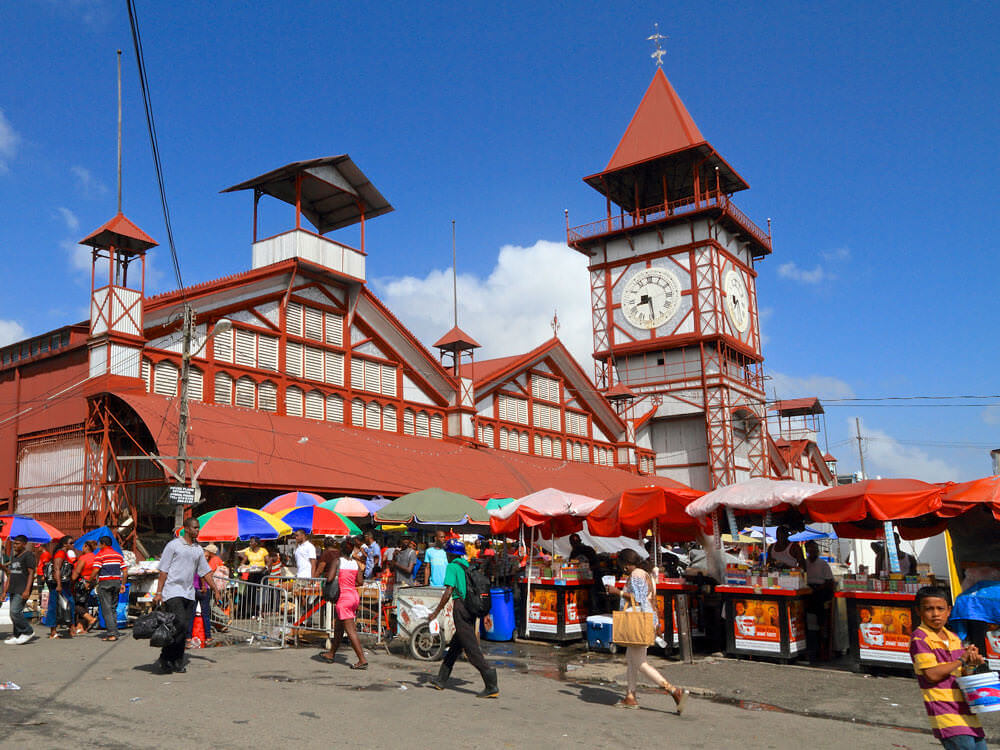 Guyana’s population stands at 789,683 according to July 2022 estimates, of which 55% are under the age of 30. Due to the dense forest in Guyana which covers over 70% of the country, most of the population live on the coast of the northern region of Guyana and 27% live in urbanised residential areas. Only approximately 10% of the population are indigenous people. East Indians make up 40% of the population, those of African descent make up 29%, 19.9% are mixed, and Amerindians 10.5% while others (including Portuguese, Chinese, White) make up the remainder, as stated by 2012 estimates.

Guyana is the only country in South America to have English as its official language, although Creole patois is spoken widely throughout the country as the lingua franca. Other languages include Lokono, Chinese and Caribbean Hindustani. 34.8% of the population is Protestant, 24.8% is Hindu, 21.1% practices several other forms of Christianity, 7.1% is Roman Catholic, 6.8% is Muslim, and 0.5% is Rastafarian whilst the remaining population practices either no religion or remain unspecified.

Archaeological evidence showcases human settlement in the highlands of present day Guyana dating back to the first millennium BCE. The people are said to have been the Arawak, Caribs and perhaps also the Warao; these inhabitants practiced shifting agriculture and hunting. Christopher Columbus is said to have first sighted the coast of Guyana in 1498.

Although Spain initially claimed the area lying between the Orinoco and Amazon deltas, it was the Dutch who were the first to establish trading posts in 1580. By the 18th century

the Dutch established trading posts upriver in about 1580 and were later joined by other Europeans in the 18th century. The British officially took control in 1814, and the land of Demerara, Berbice, and Essequibo were united in 1831 to form what was then called “British Guiana”

The discovery of gold in 1879 coupled with an economic boom in the 1890s greatly supported the development of the territory. Positive changes led to gradual increase of power held by locally elected officials; however, all changes were reverted in the reforms of 1928 whereby all power was revested into the governor and the Colonial Office. Due to widespread opposition, a new constitution was drafted, mandating universal suffrage, a bicameral legislature, and a ministerial system in 1953, although it was suspended in the same year and only reinstated in 1957. In the subsequent elections the People’s Progressive Party won twice, however there were allegations by the People’s National Congress (PNC; split from the PPP) that the system was favouring the Indo-Guyanese, and ultimately the government revised the system for more proportional representation. After which, the PNC created a coalition with another conservative party, with Forbes Burnham as leader, and won the 1964 elections; ultimately Burnham became the Prime Minister of Guyana when they gained independence on May 26th, 1966. Guyana became a republic within British Commonwealth in 1970, and Burnham went on to become the country’s first executive president when the constitution was revised in 1980. He was succeeded by Desmond Hoyte of the same party in 1985 but lost to PPP leader Cheddi Jagan in 1992.

1831 Guyana officially comes under British administration as a colony

1889 Venezuela demands claim over a large portion of Guyana west of the Essequibo River.

1997 Jagan is replaced by his wife, Janet, after elections. 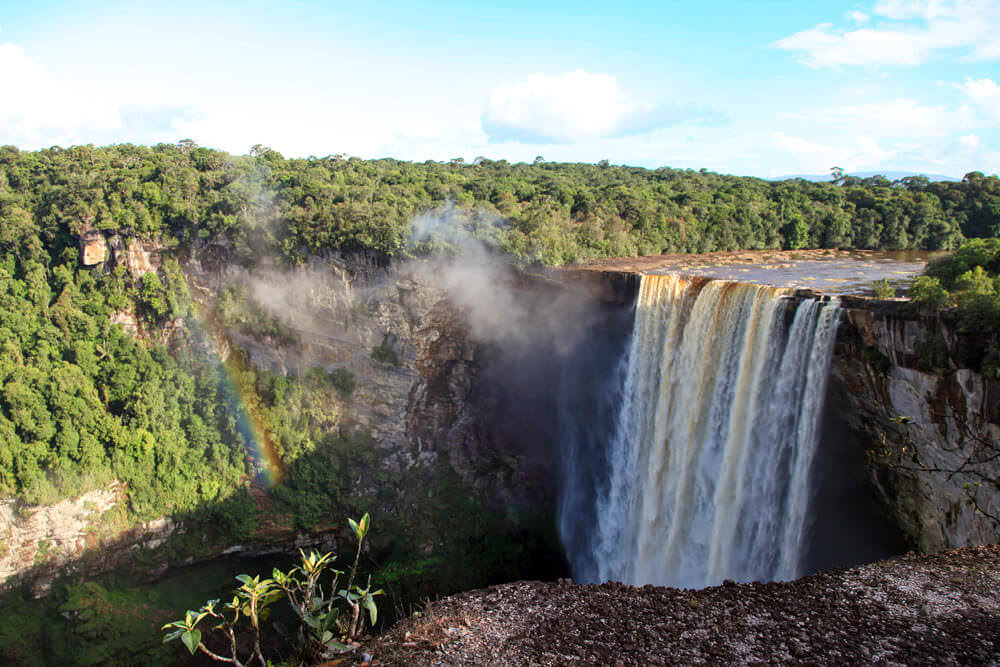 The Republic of Guyana is a semi-presidential parliamentary republic and member of the Commonwealth of Nations and the Caribbean Community (CARICOM) with the constitution of 1980 still in place. The President is the head of state. Executive power is exercised by the government. Legislative power is vested in both the government and the National Assembly of Guyana, as the unicameral legislature is formed by the National Assembly only.

Guyana follows both English common law and the Roman-Dutch code, with the latter mostly reserved more disputes over land. The Court of Appeal and High Court together act as the Supreme Court, to which all inferior courts must follow. Guyana also adopted the Caribbean Court of Justice in place of the United Kingdom’s Privy Council, which hears appeals from the Supreme Court.

Guyana continues to have a rather traditional economic system with a large portion of the population involved in subsistence agriculture. Agriculture, once the backbone of the economy, has declined in contribution to GDP and now comprises 6% of it, and the labour force involved in it has dwindled to 15% of the workforce as compared to 32% back in 1991. Industry has taken the lead in terms of being the sector with the largest contribution to GDP, as of 2021 at 56.3%, and employs about one-fourth of the total labour force. Guyana’s main industries include agro-processing, namely that of sugar, rice, timber and coconut, the light manufacturing of textiles and pharmaceuticals and the mining of gold, the production of which increased dramatically in 2016, diamonds and bauxite. Manufacturing on its own contributes 6% of the GDP. In 2015, Guyana discovered rich oil fields 120 miles from Georgetown, and 17 more by the end of 2020 in Guyana’s Stabroek Block. It is expected that by 2025 Guyana will be able to yield 750,000 barrels of oi per day greatly boosting the economy. The services sector employs majority of the working population, estimatedly about 60%, and contributes 31.4% of GDP, Guyana’s main services include wholesale and retail trade, repairs, transport and storage, finance and insurance and real estate.

The International Monetary Fund (IMF) predicted Guyana to become the 4th fastest growing economy at the end of 2021 and according to the organisation’s latest official estimates, Guyana ranked third global in real GDP growth rate with a rate of 23.8%; the nation is forecasted to reach a GDP growth rate of 57.8% by the end of the 2022 fiscal year. The IMF welcomes Guyana’s cautious management of the uptrending growth and has strongly suggested consistently prudent policy frameworks and structural reforms for the management of the resource in order to prevent sudden setbacks in the context of the global economic slowdown and the risks associated with volatile oil prices.

As a member of the Caribbean Community and Common Market, Guyana applies the Common External Tariff, which can range from 5% to 20%, depending on the product. A tariff of 40% applies to agricultural products in an effort to protect local farmers. In addition to duties on imports, Guyana adopts VAT on products at a rate of 14%. Guyana is also a signatory of the Global System of Trade Preferences among Developing Countries (GSTP).

Being the only English-speaking country on the northern coast of South America, Guyana has a unique edge to become a region hub due to its strategic location and abundance of skilled labour accessible for foreign investors and business entities looking into the region. Now as the nation is on the cusp of potentially becoming one of the largest oil producing countries across the globe, the government has begun to draft a comprehensive regulatory framework to channel increasing foreign direct investment into the diversification of its economic sectors and transform the business ecosystem into one that is investor friendly and private sector focussed.

Agriculture and agro-processing, in particular sugar refinery, cattle and livestock, soya bean production, aquaculture and processing of fruit juice concentrates and palm oil, is a key sector of expansion for Guyana via foreign investments via public private partnerships (PPPs). To encourage investment, the government has removed VAT on equipment and materials including fertilisers and pesticides and has also made available budgetary support to improve infrastructure and transport networks. Construction and infrastructure projects themselves are another area open to foreign investment with PPPs up for road expansion projects, setting up drainage and irrigation systems, new community schools and other such public institutions and more. The government of Guyana is also particularly emphasising the need for foreign investment into sustainable energy with opportunities particularly in clean energy production using bio mass from agricultural waste products i.e. sugarcane, rice, wood and coconut waste. Solar-powered farms and micro-grids as well hydroelectric and wind power generations are also priorities. Other notable sectors for foreign investment and joint ventures include tourism, specifically eco-tourism, forestry, mining, services and manufacturing.