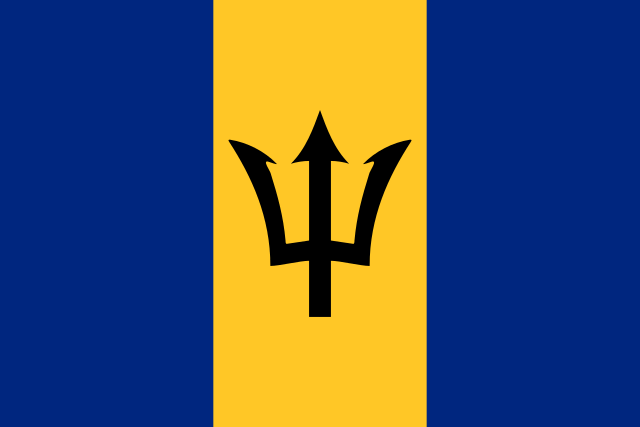 Barbados is triangular-shaped island country located in the southeastern Caribbean Sea, about 160 km east of fellow Commonwealth nation, Saint Vincent and the Grenadines. The nation’s capital, Bridgetown, is the largest of its 3 seaports and is its main trading hub. Though often grouped into the geographical boundaries of the Lesser Antilles, Barbados is not part of the territory; it has a less mountainous topography and consists more of residual soils and sedimentary deposits of shale, clay, sand and other mineral conglomerates dating back to over 70 million years. Upon this foundation a 300 feet thick layer of coral caps the entire island except in the northeastern region of the Scotland District where erosion has led to the removal of the coral cap. The coastal regions of the nation are bordered by stunning topical beaches. The country also is home to a biodiverse range of plants and animals, including the rare Green monkeys and mongooses. It is said that Barbados is the land where grapefruits originated, and is also the birthplace of rum.

Key dates from the history of Barbados

1627 – Captain Henry Powell lands a party of English settlers who establish a colony, which they then develop as a sugar plantation economy using slaves brought in from Africa.

1958-62 – Barbados a member of the British-sponsored Federation of the West Indies, of which Grantley Adams became the first prime minister. 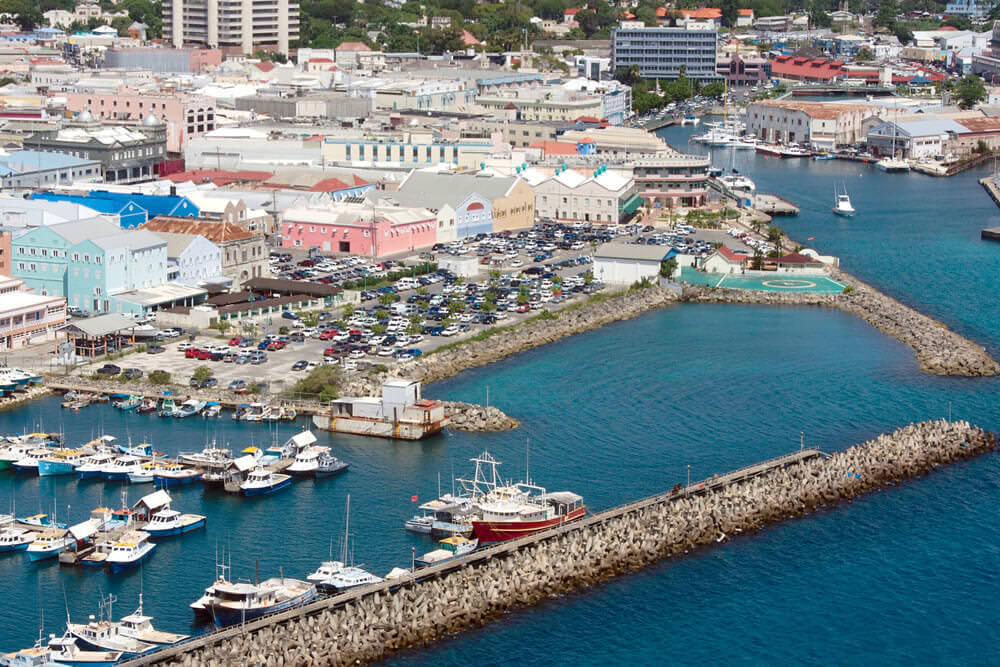 According to 2022 estimates, Barbados’ population is estimated to be 302,674. Of this population, 92.4% are of African descent, 3.1% are of mixed descent, 2.7% are Caucasian, 1.3% are East Indian and the remaining comprise many different ethnicities as a result of migration. While English is the official language of the nation and the default language used in government and business environments, the lingua franca of Bajans is Bajan, an English-based Creole language. A little over two-thirds of the population (66.4%) are Protestant while 3.8% are Roman Catholics, 5.4% practice other forms of Christianity, 1.0% are Rastafarian and 1.5% practice other religions; 20.6% of the population practice no religion.

Barbados has a predominantly mature population with an estimated 30.0% aged 25 or below and the current birthrate is 0.26%. Approximately one-third of the population resides in urban areas with an annual urbanization rate of 0.46% for the period 2020-2025. A majority of the urban-dwelling population, around 89,000 citizens, live in the capital of Bridgetown.

Archaeological evidence recovered from Port St Charles in the western region of Barbados shows that the land was first discovered and settled into around 1623 BC by Arawak people that arrived from South American territories such as present-day Venezuela. The Amerindians arrived by travelling across the ocean and its dangerous currents via dugout canoes and remained leaders of the newfound territory, which they dubbed as “Ichirouganaim” until around 1200. The Arawak were agricultural people who grew cotton, cassava, corn, guavas and papayas and they used harpoons, nets and hooks to fish. In the 13th century, the Island Caribs known as the Kalinago people arrived on the land, and due to their skills in archery and use of poisons, they quickly overpowered the Arawaks and became the dominant group on the island.

It was in the early 16th century that the first Europeans arrived on the island; it is said the Spaniards were the first to visit, followed by the Portugese explorer Pedro a Campos who dubbed the island “Los Barbados” (bearded ones) after the island’s fig trees and their beard-like appearance. On 14 May 1625, the first British ship arrived on the island under the command of Captain John Powell who was exploring new territories on behalf of King James I. Captain Powell revisited the island on 17 February 1627 with a team of settlers to settle on the island. They established a House of Assembly by 1639 in Holetown, formerly known as Jamestown, making it the third ever parliamentary democracy to exist in the world. There were annual elections and a council with a governor as its head were appointed by the King in the 1660s. The introduction of the plantation complex and its accompanying technological innovations kick started the Sugar revolution in Barbados in the 1640s; during this time, the cultivation of sugar cane, tobacco and cotton became widespread. Babrados’ sugar production was the leading sector in the entire region, leading to the creation of a plantocracy whereby the affluent owners of sugar plantations greatly prospered but at a grave cost to the social construct of the society that became heavily fragmented and highly classist. Labourers were brought in from West Africa and soon farmlands were conjoined to create industrial plantations for more efficient and widespread sugar production. For about two centuries, labourers struggled for better representation and their human rights leading to several rebellions, most notable of which took place in 1816. Labourers were emancipated when the slavery laws were abolished in 1834, and the sugar industry continued to prosper well throughout the 19th century despite rising competition from the European beet sugar industry.

Due to the low wages and long working hours labourers had to endure without any compensation in the form of social services, frustrations and resentment continued to simmer which were further exacerbated by crises including the Great Depression, rising population and the closing of emigration outlets which spurred middle-class reformers to protest against the political franchise and demand for universal suffrage. As the movement began to gain attention, in 1938 the West Indies Royal Commission, known as the Moyne Commission, was established and sent to assess the economic and social status of the territory and ultimately supported several of the demands of laid out, including amongst others the right to more political agency and self-governance and the legalisation of trade unions. Reform implementation took place well into the 1940s which led to the institutionalisation of mass political organisation and diminished the power and influence of plantocrats as agency for local political leaders gained momentum. Universal suffrage was adopted in 1950 and full intenral self-governance actualised in 1961. The nation was integrated into the West Indies Federation in 1958 and remain until the Federation’s collapse in 1962.

Barbados became an independent nation on 30 November 1966. The economy was performing well due to policy reforms that focussed on economic diversification and partially also due to the distribution of power to local political leaders and parties. The first Prime Minister of Barbados, Errol Walton Barrow of the Democratic Labour Party, served two terms from 1966-1976 and 1986-87. He was central to the formation of the Caribbean Free Trade Association which later became known as the Caribbean Community and Common Market (CARICOM) in 1973. In November 2021, Barbados officially became a republic and Queen Elizabeth II was replaced as head of state with the country’s first president, Dame Sandra Mason.

1536 Portuguese explorer Pedro a Campos lands on the island

1627 Captain Henry Powell lands a party of English settlers; establishes a colony to develop as a sugar plantation economy

1954 Ministerial government set up with Grantley Adams as premier. 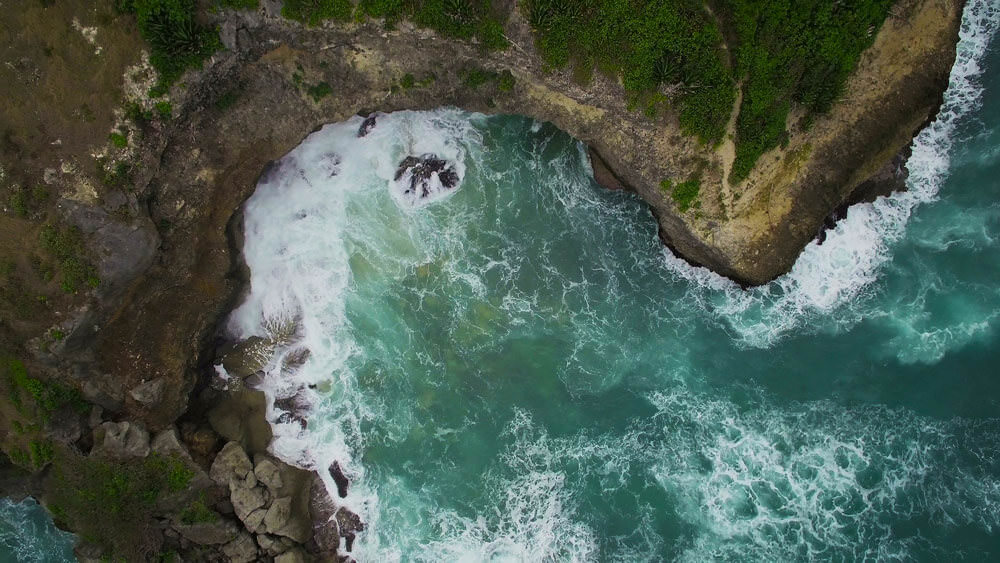 The constitution of 1966 established a governmental structure based on the British parliamentary system. The British monarch is the head of state and is locally represented by a governor-general. The prime minister, generally the leader of the largest political party in the elected House of Assembly (lower house of the legislature), is the head of government. The prime minister appoints a cabinet. The upper house of the legislature is an appointed Senate. The Barbados Labour Party (founded in 1938) and the Democratic Labour Party (founded in 1955) are the main political parties.

The legal system of Barbados is derived from English common law and its statutes. The Attorney General overlooks the implementation of the legal and judicial system, the latter of which consists of a lower Magistrates court and the Supreme Court which also includes a High Court and Court of Appeal. The Privy Council of England used to previously handle the final appeal from Barbadian court and has been replaced by the Caribbean Court of Justice based in Trinidad and Tobago.

Barbados is a middle income country with an open, market-oriented economy and the highest income-per-capita in the Caribbean region. In the past, Barbados was heavily dependent on the export of sugar as its main revenue earner, with agricultural production and fishing forming the island’s basic economy. But in recent decades, the economy has diversified, making services, manufacturing, and tourism amongst its most significant sectors.

The services sector accounts for roughly 80% of the country’s GDP while industries contribute 12.8% (of which manufacturing comprises around 5%) and agriculture 1.5%, according to 2020 estimates. 37% of Barbados’ total land is arable; the sector employs an estimated 27% of the nation’s workforce and the main crops include root crops such as cassava, yams and sweet potatoes along with sugar cane, cotton and vegetables such as cabbage, carrots, lettuce, beets, okras, peppers and beans. 19% of the population is employed in the industries and 78% are employed in the services sectors, primarily in financial services, tourism and hospitality. A large amount of income in the form of remittances is received from Barbadians overseas. Barbados also has offshore oil and natural gas reserves.

Barbados is a signatory of the Caribbean Community and Common Market (CARICOM). Through the CARICOM trade agreements with EU and the UK, Barbados enjoys trade benefits by proxy.

In 2022, Barbados was given a score of 71.3, ranking it 4th in the Caribbean region and 28th worldwide on the Index of Economic Freedom. According to the United Nations Office for the Coordination of Human Affairs (OCHA), Barbados ranks first in the Caribbean region on the Quality of Infrastructure Index, positioning it as the 30th best worldwide. Along with a sound infrastructural foundation and lucrative business environment with a sound regulatory framework, Barbados one of the most politically and economically stable countries in the Caribbean, a talented pool of industry professionals fluent in English with a 99.6% literacy rate and a strong currency.

Economic diversification remains a priority for the Barbadian government which is looking to prioritise both mainstream and niche uptrending sectors. These include FinTech for which the government has established a Regulatory Sandbox and are encouraging foreign investment into innovations in the fields of AI, blockchain and data science; they are actively encouraging investment into renewable and green energy with a special focus on solar photovoltaics, wind energy and biogas as stipulated under the Barbados National Energy Policy. In a similar vein, value-added ICT services, particularly software development, database management, web applications, transactional processing and computer-aided design and data entry are some of the areas which could be of interest to foreign investors. Barbados is also interested in attracting foreign investment for their growing interest in the multi-billion dollar regulated and legal cultivation and production of unique medical cannabis strains. Other areas of interest for foreign investors include the global education, insurance services, niche tourism and niche manufacturing sectors.

Barbados offers investors several highly beneficial investment incentives such as tax holidays for the initial years of establishing a business in the country to be followed by low tax rates, exemption from import duties, full repatriation of profits, dividends and capital, 40% or more savings on operating costs, duty free access to North American and European markets and subsidised factory spaces in 10 fully functional industrial parks. There are also sector-specific incentives, for example, by invetsing in the IT Services sector investors are eligible for a special tax rate of 2.5% on net profits and can apply for training grants of US$50 per employee/week for the first 1.5 years of business operations.