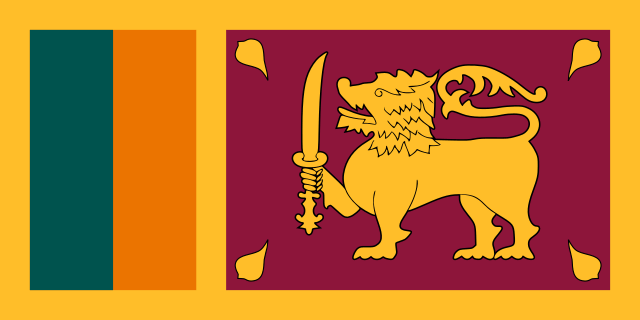 Known as Ceylon until 1972, the island country lies in the Indian Ocean 432 km in length and 224 km in width. The Palk Strait lies between the southern area of India, Tamil Nadu, and the north-western coast of Sri Lanka; the proximity between the two countries lends to their intertwined culture. Ram Setu, also known as Adam’s Bridge, is a famous chain of shoals made of limestone that used to connect India and Sri Lanka before the 1480s. Sri Lanka’s geographical location as a crossroads of maritime routes over the Indian Ocean is why the southwest city of Colombo was an urban center for trade and remains the executive and judicial capital of Sri Lanka while Sri Jayewardenepura Kotte is the legislative capital. 83% of the island is made up of the Central Highlands; the area of which is diverse in terrain consisting of plateaus, ridges, intermontane basins, and valleys. The island has magnificent escarpments in the north and northeast area of the highlands, the most amazing of which is called the World’s End, which has an almost vertical 4,000-foot precipice. The area surrounding the highlands is a mostly flat plain which is fringed by a coast of jagged promontories and cliffs, deep water bays, sandy beaches, and lagoons.

Sri Lanka (formerly Ceylon) joined the Commonwealth in 1948. In 1938, Sri Lanka participated in its first Commonwealth Games in Sydney and celebrated it by taking home the boxing gold medal. 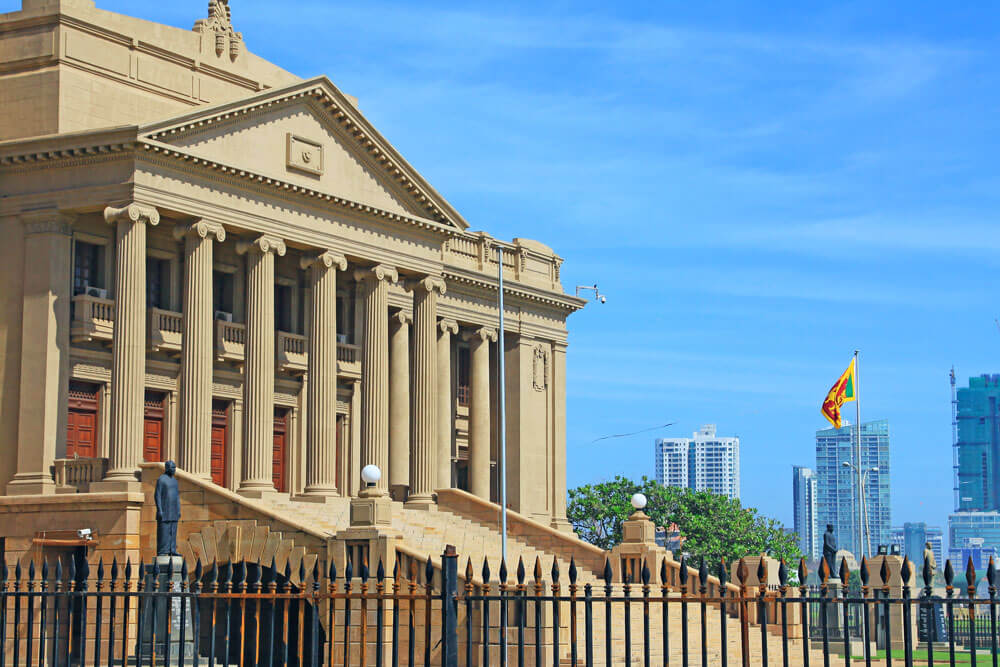 Sri Lanka is a country with many ethnic groups, but the two predominant ones are the Sinahalese (74.9%) and the Tamils (11.2%), while the rest of the population consists of Sri Lankan Moors (9.2%)), Indian Tamils (4.2%) and smaller groups such as the Burgher people, Vedda, Bharata, Sri Lankan Chetties and more. Sri Lanka has two official languages, Sinhala and Tamil which is spoken by 87% and 28.5% of Sri Lankans respectively. 24% of the population is also fluent in English at is still used in government documentation. The major religions practiced in the state are Buddhism (70.2%), Hinduism (12.6%), Islam (9.7%), Roman Catholism (6.1%) and other forms of Christianity (1.3%).

In 1505, Portuguese envoys arrived seeking cinnamon, a spice of high value to them, and requested the King Vijaybahu of Kotte permission to build a fort for their expedition, which was granted. Due to increasing demand for more quantities at low prices, it led to a war between them in 1520-21 which the Portuguese won. The King was subsequently deposed by his three sons and the kingdom was divided. The eldest became King, Bhuvinaika Bahu, who ruled at Kotte and the younger two were given independent kingdoms at Sitawake and Rayigama. King Bahu and the ruler of Sitawake, Mayadunne, fought frequently as the eldest relied on the Portuguese to help reinforce his rule while Mayadunne resented Portuguese influence and wished to expand his kingdom. In 1543, King Bahu signed a contract with the Portuguese in 1543 asking for them to protect his grandson and heir to the throne, Prince Dharmapala, in exchange for more privileges and tributes of cinnamon. When King Bahu died in 1551, Dharmapala was educated by the Franciscan order and converted to Christianity in 1556 and many political elites followed suit. Mayadunne’s son continued the struggle against the Portuguese but was defeated and killed in 1593 after which Sitawake also collapsed. The Portuguese annexed Kotte and Sitawaka in 1597 and the Kingdom of the Jaffna peninsula in 1619. Catholicism was spread by missionaries and Portuguese began to be used as the language of the land; due to which the locals gained proficiency in it. Although separate attempts were made to capture the Kingdom of Kandy in the central highlands, they were unsuccessful.

In 1636, King Rajasinha of Kandy began to rely on the Dutch to expel Portuguese forces, sensing the latter’s decline in power. He received Dutch envoys the following year and the Dutch agreed to take over Portuguese ports in exchange for compensation of expenses. From 1638 to 1640, the Dutch captured several ports and after a temporary peace treaty between the two European powers from 1640-1652, war resumed between them. As Kandy continued to rely on the Dutch, the latter captured Colombo in 1656 and Jaffna in 1659, and eventually war broke out with Kandy as well in 1760 and as the Dutch came out victorious, Kandy was forced to recognize their sovereignty and gave up their parts of the coastline. Being Protestant, the Dutch reversed the Catholic teachings and declared them illegal, focusing on spreading Protestantism via schools and increased printing facilities. By setting up publishing facilities and transport for monks to travel to and from India, there was a revival of Buddhism and Hinduism in the Sri Lanka, and Christianity was used and discussed in Tamil and Sinhalese literature. Tobacco and coffee plantations began being set up during this time which elevated Sri Lankan products value in European markets.

When the French Revolution began in 1792 and the Netherlands came under French control, the British East India Company arrived in Sri Lanka from India and faced little resistance from the Dutch who surrendered in 1796. Sri Lanka became a crown colony in 1802 by the Treaty of Amiens with France, after which the territory was given the name “Ceylon”. Initially, they followed the way of the Portuguese and Dutch by offering the kingdom of Kandy protection in return for incentives, but ultimately decided on attempting to integrate Kandy into the crown colony for better access and less expenses. The first attempt at capture in 1803 failed due to the loyalty of the nobility with the king of Kandy. But after manipulating dissent amongst Kandyan chiefs the British succeeded in 1815, ensuring that laws and customs remained unchanged. Protests against Kandy losing its separate status were suppressed in 1818. Reforms were introduced in 1833 whereby English was made the official language and a unitary administrative and judicial system was adopted for the whole island. The Executive and Legislative councils were set up. Road networks were built, ad agricultural plantations, especially for coffee, rubber, and coconuts were encouraged through cheap prices for land for cultivators. Due to a leaf disease that spread in 1870s, Ceylon coffee crops were destroyed and were eventually replaced by tea. Increasing trade led to industrialization and transport system construction. By the end of the 19th century, national sentiments began to rise in every echelon of Ceylon society, even the Buddhists and Hindus who began to reject Christianity taught in schools compulsorily. Regional and communal associations and unions began voicing for reform demanding participation in the executive branch and more representation in legislature via elective means; however, due to lack of coordination reforms of 1910 did not bestow more than recognition of elective principles in the Legislative Council. Further concessions were granted in 1924 and in 1931 a new constitution was granted whereby legislature was elected by universal suffrage, and yet another one in 1946. But with the independence of India, Ceylon too demanded independence. It was agreed that Ceylon would become a dominion in June 1947, and eventually formal independence was granted on 4th February 1948, and joined the Commonwealth in the same year.

Dr Stephen Senanayake of the United National Party became the first Prime Minister, however he passed away in 1952. His son Dudley Senanayake took over but resigned in 1953 and was replaced by fellow UNP member Sir John Kotelawala. Due to sentiments of marginalization and growing nationalism within the non-English speaking masses, in 1956 their party fell from power. The next government was led by Sri Lanka Freedom Party Leader S W R D Bandaranaike, who introduced the Sinhala Only Bill, making Sinhalese the official language, much to the resentment of the Federal Party representing Tamils. In 1960 he was replaced by his widow Sirimavo Bandaranaike who served as the territory’s first female PM until 1965 when Dudley Senanayake became prime minister again until 1970. In 1971 a rebellion of young people was led by an anti-Tamil organisation called the Janatha Vimukthi Peramuna (People’s Liberation Front), but it was put down in the same year. In 1972 the constitution was reformed, and the country became the Republic of Sri Lanka, while still maintaining its linkage with the Commonwealth.

1972 Ceylon becomes a republic and changes its name to Sri Lanka.

2009 Government troops capture the northern town of Kilinochchi in January, held for ten years by the Tamil Tigers as their administrative headquarters. President Mahinda Rajapakse urges the rebels to surrender.

2015 Rajavarothiam Sampanthan becomes the first lawmaker from the ethnic Tamil minority in 32 years to lead the opposition in parliament. 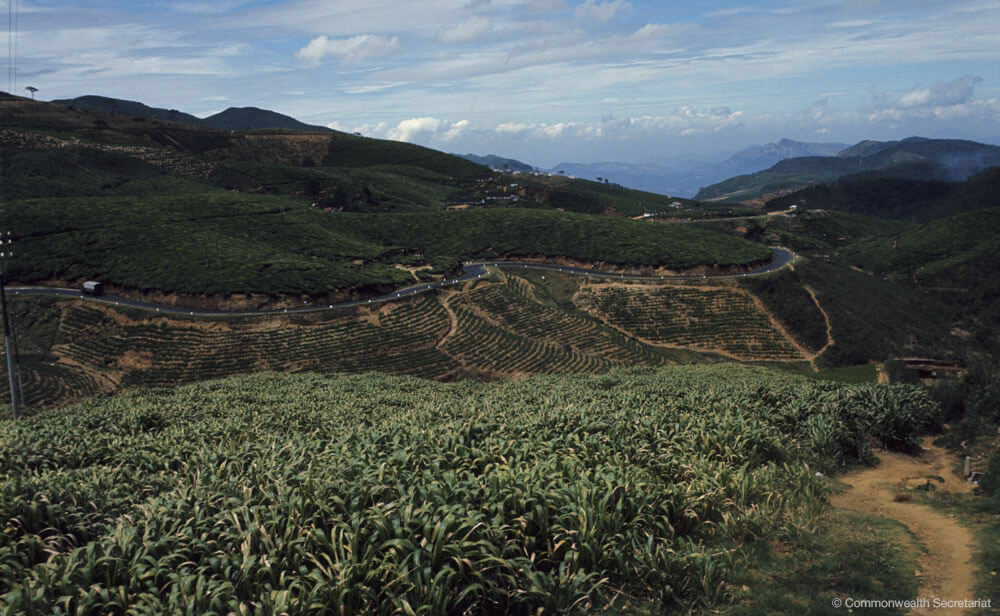 Sri Lanka is a democratic republic and a unitary state governed by a mixture of a semi-presidential system and a parliamentary system. Most provisions of the constitution can be amended by a two-thirds majority in parliament. The amendment of certain basic features such as the clauses on language, religion, and reference to Sri Lanka as a unitary state require both a two-thirds majority and approval in a nationwide referendum.

Sri Lanka’s economy is led by the service, industrial, and the agriculture sectors, which accounts for 60%, 26.5%, and 8.36% of the country’s GDP in 2020, respectively. Tourism is one of the key industries in Sri Lanka, accounting for 12.6% of GDP for Sri Lanka in 2019 before the start of the coronavirus epidemic. Major tourist attractions include famous beaches around the island located in the southern and the eastern parts of the country and ancient heritage sites located in the interior of the country and resorts located in the mountainous regions of the country. The tea industry, operating under the Ministry of Public Estate Management and Development, is another main industry in Sri Lanka providing a 5% share of global tea export. The central highlands of the country have a low temperature climate throughout the year and annual rainfall and the humidity levels that are suitable for growing crops. The agricultural sector of the country produces mainly rice, coconut and grain, largely for domestic consumption and occasionally for export.

In June 2021, Sri Lanka opened the 400-acre Arabokka Pharmaceutical Zone in Hambantota and is inviting foreign investment and manufacturing of pharmaceutical ingredients and secondary processing including formulation, blending, and packaging. The zone offers stellar facilities, proximity to the port and Mattala Airport, all environmental clearances, and tax incentives such as 5–10-year tax holidays, 0% duty& taxes, expat employment without tax for 5 years, and customized incentives depending on type of investment size and product type.

The tourism industry is Sri Lanka’s 3rd largest foreign exchange provider and is central to the economy. Therefore, the government is determined to elevate visitor experiences and actively encourages investment in the sector as the country becomes an increasingly popular travel destination. Specifically, investment is being sought for accommodation services such as hotels, resorts, villas, restaurants, and eco-lodges; recreational facilities including entertainment complexes, theme parks, shopping complexes and more; and skill development training for hotel and hospitality staff.

For the infrastructure and construction sector, the government has issued a mandate for massive infrastructure development in the coming 5 years. Investment is prioritized for transport facility upgradation, port and airport development and renewable energy sources. For agriculture and food processing development, the state is looking for investment to enhance Sri Lanka’s fishing economy due to its ideal location along the coastline and has committed over 1000 acres to develop fisheries, with special focus on sustainable fishing.

Other interesting areas for investment include, but are not limited to, manufacturing of electronics, textiles, and development of IT training institutes and R&D collaborations on emerging technology.