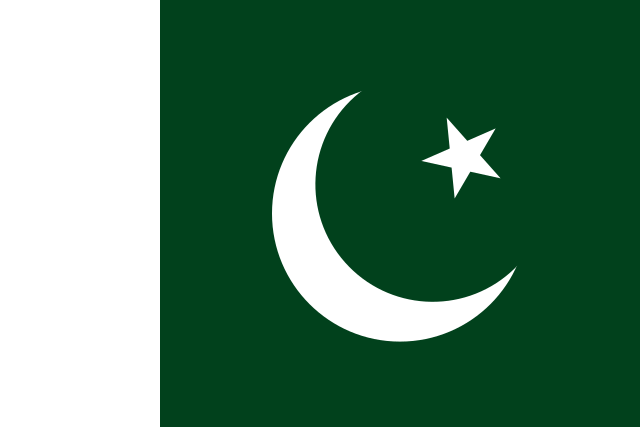 Pakistan is globally the 33rd largest country spanning 881,913 km2, with the 5th largest population. It shares its borders with Afghanistan and Iran to the west, India to the east, and China in the north, which it is connected to via the famous Khyber Pass. It is home to some of the most diverse landscapes, ranging from the Pamirs and the massive Karakoram Range encompassing stellar valleys in the north, down to fertile flat plateaus and the historic Indus River that trails south to the Arabian Sea with the ancient site of the Mohenjo-Daro civilisation along its side. Climate wise the northern areas of Pakistan consist of icy glacial mountain regions, and to the south in the province of Balochistan are stretches of scorching deserts reaching the coast of the Indian Ocean. The capital of the country, Islamabad, lies at the foothills of the glacial Himalayas. The culture and the people of Pakistan reflect the diversity of its landscapes. Pakistan also administers the western portion of Kashmir, called Azaad Kashmir, and the province of Gilgit Baltistan, both of which collectively called “The Northern Areas”. 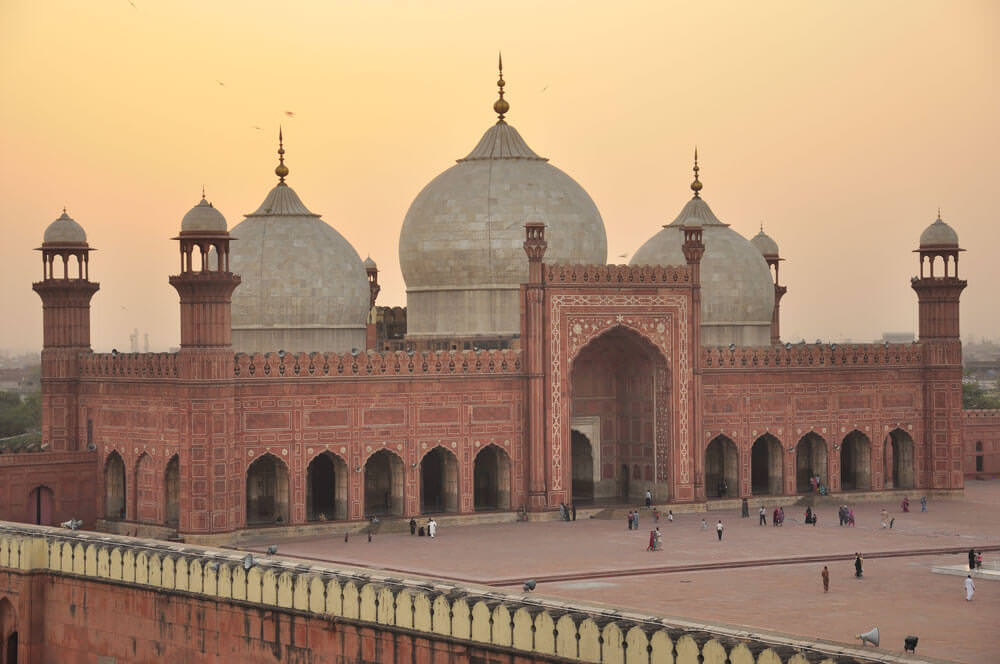 Pakistan is home to over 70 different ethnicities but 6 of them form much of the population. The Punjabi people, from Pakistan’s largest province of Punjab, make up about 45% of the population, followed by the Pashtuns (15.4%), Sindhis (14.1%), Saraiki (8.4%), Muhajirs (7.6%), Balochis (3.6%) and the remaining constitute 6.3%. According to the Pakistan Bureau of Statistics, 96.3% of the population is Muslim, 1.6% is Christian, 0.22% Qadianis (Ahmedis), 0.25% are scheduled castes and the remaining 0.07 belong to other religions. English and Urdu are both the official languages of Pakistan, the former being most used by upper class families, and government ministries. Punjabi is spoken by 48% of residents, followed by Sindhi (12%), Saraiki (10%), Pashto (8%), Balochi (3%), Hindko (2%) and others.

The Mughal Empire had a strong rule over the Indian subcontinent for over two centuries starting from 1526 up until 1761 when their influence began to wane due to internal fragmentation and foreign settlement forces, until the last Mughal emperor was exiled to Yangon, Myanmar by the British following the Sepoy Mutiny (1857-58). 28 years afterwards, in December of 1885 the Indian population was given representation in the government via the formation of the Indian National Congress, though it was not given any executive power. The Muslim members of the Congress were became increasingly dissatisfied with their level of representation, thus formed the All India Muslim League in 1906, of which lawyer, and future founder of Pakistan, Muhammad Ali Jinnah, became the leader of in 1913. The political faction began campaigning for an independent Islamic state in 1930 after a speech by the famous poet, Muhammad Allama Iqbal outlined the possible borders for a Muslim state. In 1935, the British passed the Government of India Act whereby the local population would be able to govern themselves using the parliamentary democracy system. Concerned that the Muslim population may be overshadowed by the Hindu politicians of the Indian Congress led by Mahatma Gandhi, who had adapted better under British rule, Jinnah became increasingly convinced that the Muslims needed political safeguarding. Thus, the landmark document demanding a separate homeland for the Muslims in the Lahore Resolution was published in March 1940.

With the conclusion of World War 2 in 1945, the new Labour Party government headed by Clement Attlee began arranging for India’s independence. To discuss the transfer of power, Attlee sent a cabinet led by William Pethic-Lawrence to finalise the details with Jinnah and Gandhi; however, the talks dissolved inconclusively due to lack of consensus between the two leaders and complete separation between the Muslims and non-Muslims became the only solution. Pakistan became an independent state on the 14th of August 1947, as a dominion within the Commonwealth. The country was divided into West Pakistan, with the 4 provinces of Punjab, Sindh, Balochistan, and Northwestern Frontier Province (now called Khyber Pakhtunkhwa), and East Pakistan. Jinnah became the first governor-general, with party member Liaquat Ali Khan as Prime Minister. In October of the same year, the government of Azad Kashmir was formed, and Pakistan became its administrating country.

1947 Pakistan gains independence on the 14th of August. West and East Pakistan created out of Partition.

2010 Parliament passes constitutional reforms transferring power from the President to the Prime Minister.

Pakistan is a parliamentary republic wherein the Prime Minister is the head of government in charge of the executive branch of the government as well as the Cabinet which includes ministers of state. The federal legislature is bicameral consisting of the Senate in the upper house and National Assembly in the lower house.  The Senate is a permanent legislative body with equal number of seats for each province that are elected by their respective provincial assemblies. The chairman of the Senate may, under the constitution, replace the President should the position become vacant. The PM is appointed by the National Assembly members via vote; and the NA members themselves are elected by universal suffrage with equal number of seats for all domiciles.

The legal system is derived from English common law but is altered by the 1973 constitution and Islamic law (sharia). The Supreme Court, provincial high courts, and other courts oversee criminal and civil issues. The president appoints the Supreme Court’s chief justice, other Supreme Court justices as well as provincial high court judges on the advice of the chief justice. The Supreme Court has original, appellate, and advisory jurisdiction, and high courts have original and appellate jurisdiction. The Federal Shariat Court ensures that the laws are consistent with Islamic injunctions. Pakistan’s penal code has limited jurisdiction in tribal areas, where law is largely derived from tribal customs.

Pakistan has seen a steady rate economic growth in the past decade. Its landscape lends itself well to farming and harvesting crops, from which a large proportion of the Pakistani earn their living. Similarly, the country’s arable land allows for the production and processing of cotton, which contributes to the Pakistan’s expansive textile industry. Textiles form the largest source of Pakistani foreign exchange revenue, accounting for 57 percent of all Pakistani exports in 2020, employing 40 percent of the industrial labour force. The country’s yarn production is ranked third in the world and has the longest production chain globally. The European Union has also recently given Pakistan’s textile industry a ‘generalised scheme of preferences plus’ status, which will allow domestically produced garments to flow more freely throughout the Union. Pakistan’s second largest contributor to the economy is agriculture, employing 41 percent of the total workforce. Pakistan enjoys an abundance of arable land which is well-suited for farming. The sector produces a wealth of crops for domestic consumption and for exportation, which include sugar cane, wheat, and rice amongst other foodstuffs.

Pakistan has abundant deposits of coal, copper, gold, chromite, mineral salt, bauxite, and several other minerals. There are also a variety of precious and semi-precious minerals including peridot, aquamarine, topaz, ruby, emerald, rare-earth minerals bastnaesite and xenotime, sphene, tourmaline, and several varieties of quartz. However, the mining sector only contributes a total of 3% of GDP, despite such rich resources. 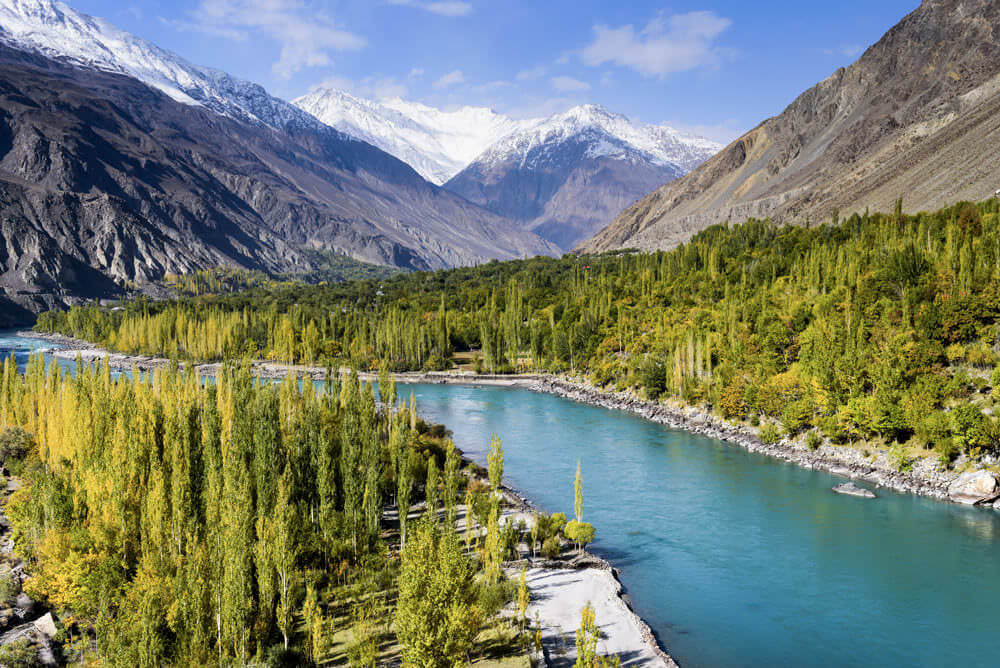 Pakistan possesses a youthful (55% population below the age of 19), large and affordable semi-skilled labour force, and a growing middle class that is proficient in English. The consumer market of Pakistan is flourishing and the tele density of the country, which has now reached over 150 million in terms of mobile usage, is also growing at a faced paced.

The logistics and transport industries attract around US$223.5 million annually from FDI; however, further investment is required to maximise the potential that the country’s 14 dry ports offer. These ports could increase trade to and from the country by means of marine transport. The government is encouraging the usage of ports by constructing special economic zones and smart cities along them, such as the Gwadar SEZ and Smart Port City masterplan. Telecoms as an industry has attracted more than US$2.6 billion between 2015 and 2019 in addition to the US$4.5 billion contributed by Pakistani telecom investors. The country is an ideal location for investment in such an industry, with 73 million 3G and 4G subscribers as of 2019. Additionally, Pakistan is ranked fourth globally for freelance development and the country prides itself on its open and deregulated telecoms market.

To improve the automobile industry, the government of Pakistan introduced the Automotive Development Policy in 2016 aiming to increase the volume and quality of motor vehicles manufactured in the country using advanced technology. The state of Pakistan is actively seeking foreign investment and for foreign companies to set up their automotive businesses in the country or undertake joint venture programs with local companies. Incentives for foreign investors include duty free imports of machinery for setting up manufacturing facilities, 50% discount on prevailing duty of imports of at least 100 vehicles of the same CBU variant, and concessional duty rates on localised and non-localised parts for manufacturing.

Although Pakistan has large natural reserves of coal which are currently mined at a rate of approximately 5.5 million tons a year, the country aims to improve its green power generation, promoting wind hydro and solar power generation. Hydroelectricity accounted for over a quarter of the energy produced across Pakistan in March 2019, and the country has vast potential for further sustainable energy projects.