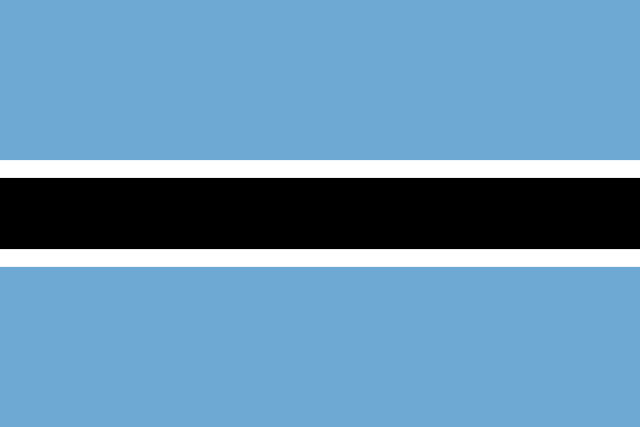 Botswana is a landlocked country in Southern Africa that borders the countries of Namibia, South Africa, Zimbabwe, and Zambia. The territory is roughly triangular—with its eastern side protruding into a sharp point. Its eastern and southern borders are marked by river courses and an old wagon road; its western borders are lines of longitude and latitude through the Kalahari, and its northern borders combine straight lines with a river course. The capital of Botswana is Gaborone. Within the Botswana’s borders is a rich variety of wildlife, including many species of mammals, birds, reptiles, amphibians, and fish. 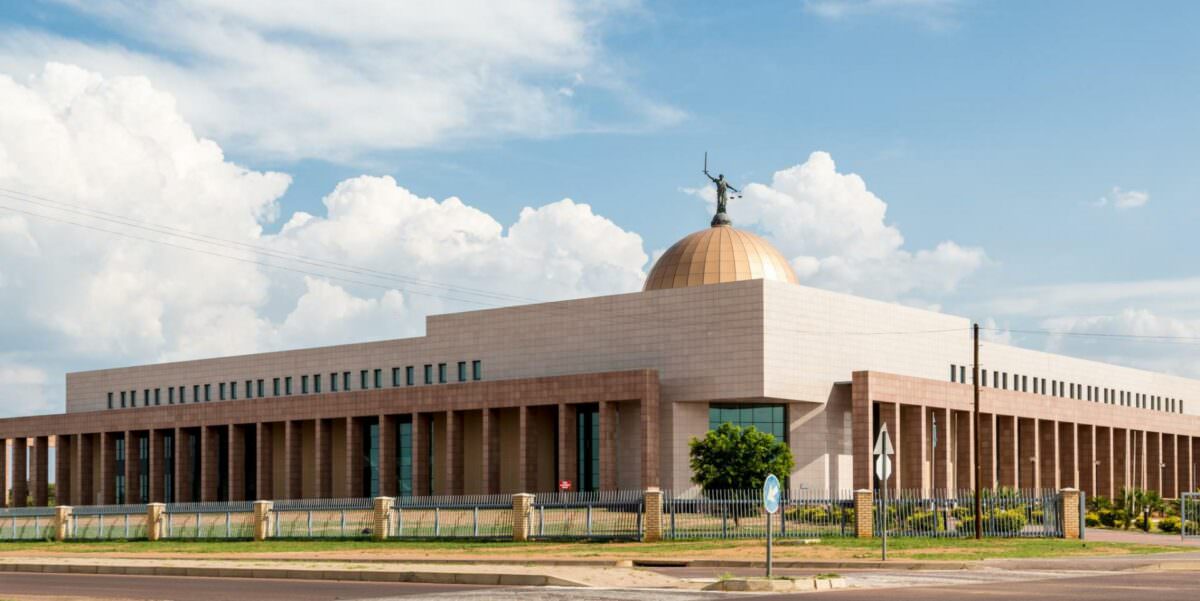 Majority of the civilians, approximately 79%, belong to the Bantu-speaking ethnic group of Tswana; 11% belong to the southern Bantu group of Kalanga; 3% are from the Basarwa group. The remainder of the population is are of European ancestry or belong to other minor groups including the Kgalagadi. Due to the ethnic diversity, many different languages are spoken aside from the official language of English which is primarily used in business and government and is otherwise colloquially spoken by 2.8% of the population. Setswana is the lingua franca of the nation, spoken by 77.3% of the population whilst 7.4% speak Sekalanga, 3.4% speak Shekegalagadi, 2% speaker Zezuru/Shona, 1.7% speak Sesarwa, 1.6% speak Sembukushi and 1% speak Ndebele.

In terms of religion, the society is predominantly Christian with almost 80% practicing Christianity, whilst 4.1 practice Badimo and 1.4% practice several religions including Islam, Hinduism and Rastafarianism. The remaining 15.2% practice no religion. The nation has an overarchingly youthful population, with an approximate 50% under the age of 25.

The supporters of Seretse Khama began to organize political movements from 1952, and there was a nationalist spirit even among older “tribal” leaders. Ngwato “tribal” negotiations for the start of copper mining led to an agreement in 1959. A legislative council was eventually set up in 1961 after limited national elections. The Bechuanaland People’s Party was founded in 1960, and the Bechuanaland Democratic Party was founded in 1962.

After long resistance to constitutional advance before economic development could pay for it, the British began to push political change in 1964. A new administrative capital was rapidly built at Gaborone. Bechuanaland became self-governing in 1965, under an elected BDP government with Seretse Khama as prime minister. In 1966 the country became the Republic of Botswana, with Seretse Khama as its first president.

For its first five years of political independence, Botswana remained financially dependent on Britain to cover the full cost of administration and development. The planning and execution of economic development took off in 1967–71 after the discovery of diamonds at Orapa. From 1969, Botswana began to play a more significant role in international politics. In 1974, Botswana was one of the “Frontline States” seeking to bring majority rule to Zimbabwe, Namibia, and South Africa. The organization of the Frontline States led to the formation of the Southern African Development Coordination Conference in 1980.

1966 – Bechuanaland is granted independence and becomes Republic of Botswana with Seretse Khama as president.

1999-2008 – Presidency of Festus Mogae – praised for diversifying Botswana’s economy to reduce its dependence on diamonds. 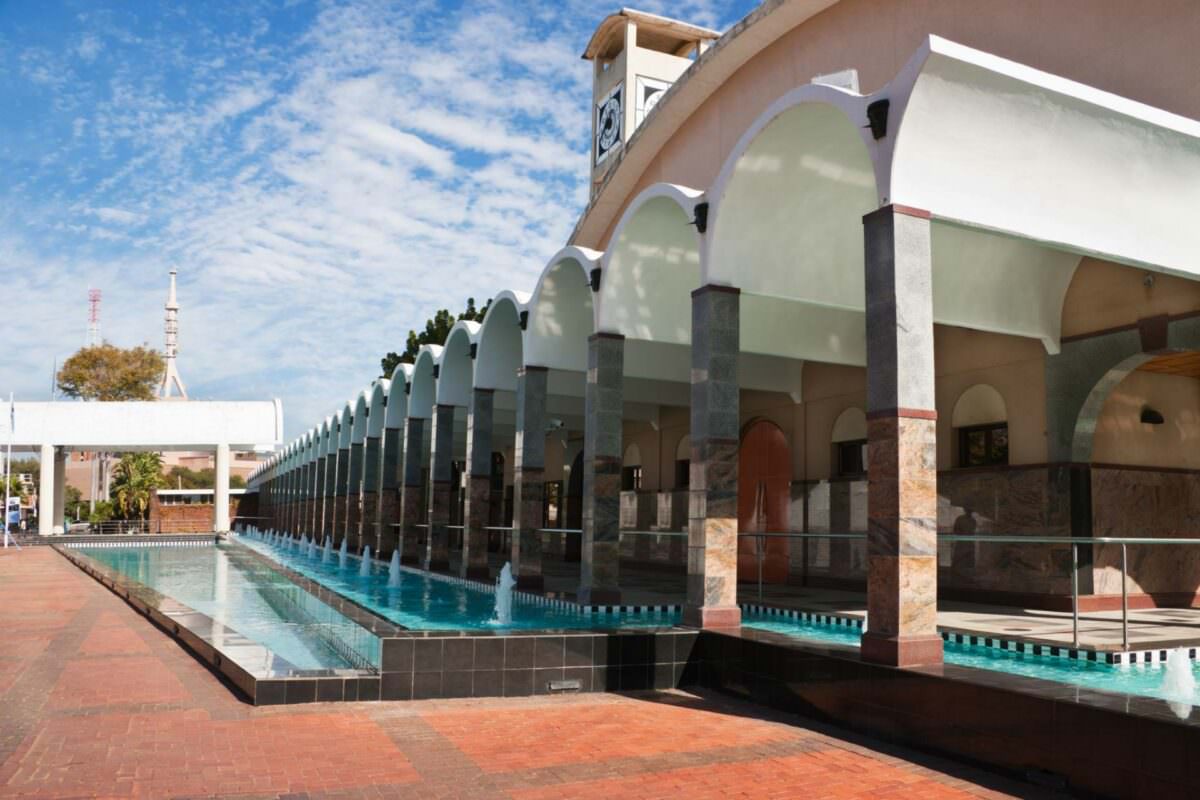 Under the 1966 constitution, Botswana is a multiparty republic. The president, who serves as the head of state and government, is indirectly elected to a five-year term and limited to 10 years in office. The National Assembly is composed of elected members (elected by universal adult suffrage) and a handful of ex officio members and appointed members nominated by the ruling political party; all members serve five-year terms.

The Ntlo ya Dikgosi (House of Chiefs) serves in an advisory role on matters of legislation pertaining to tribal law and custom. It is composed of permanent members (representing each of the eight Tswana “tribes”) and members who are selected to serve a five-year term. Botswana’s judicial system consists of a High Court, a Court of Appeals, and several Magistrate Courts.

The nation possesses one of the largest coal reserves which is estimated to have a capacity of 202 billion tonnes. Botswana is also the second largest producer of diamond in the whole world, with abundant reserves of other precious minerals and metals including uranium, copper, shale as well as gas. The industrial sector contributes 27.5% of GDP and employs an estimated 18% of the population, largely for mining and mineral processing. Comparatively, the agriculture contributes only 2.1% of GDP though it employs more of the population, almost 20%, because of the importance of agriculture as an income for those abiding in rural areas. The sub-sector most dominant is the production of cereals including sorghum, maize and millet. In 2021, due to an expansion of arable area and favourable weather, the sector produced above-average yields. The services sector is the backbone of the Botswanan economy, accounting for 65.1% of GDP and employs 62.4% of the population; within the sector, tourism, notably ecotourism, and transportation are the main sub-sectors generating revenue with the former being the case largely due to the nation’s diverse ecosystems and beautiful wildlife safaris and nature parks. The financial sector of Botswana is a recently uptrending facet of development, with the Botswana Stock Exchange (BSE) amongst the best in performance across Africa. 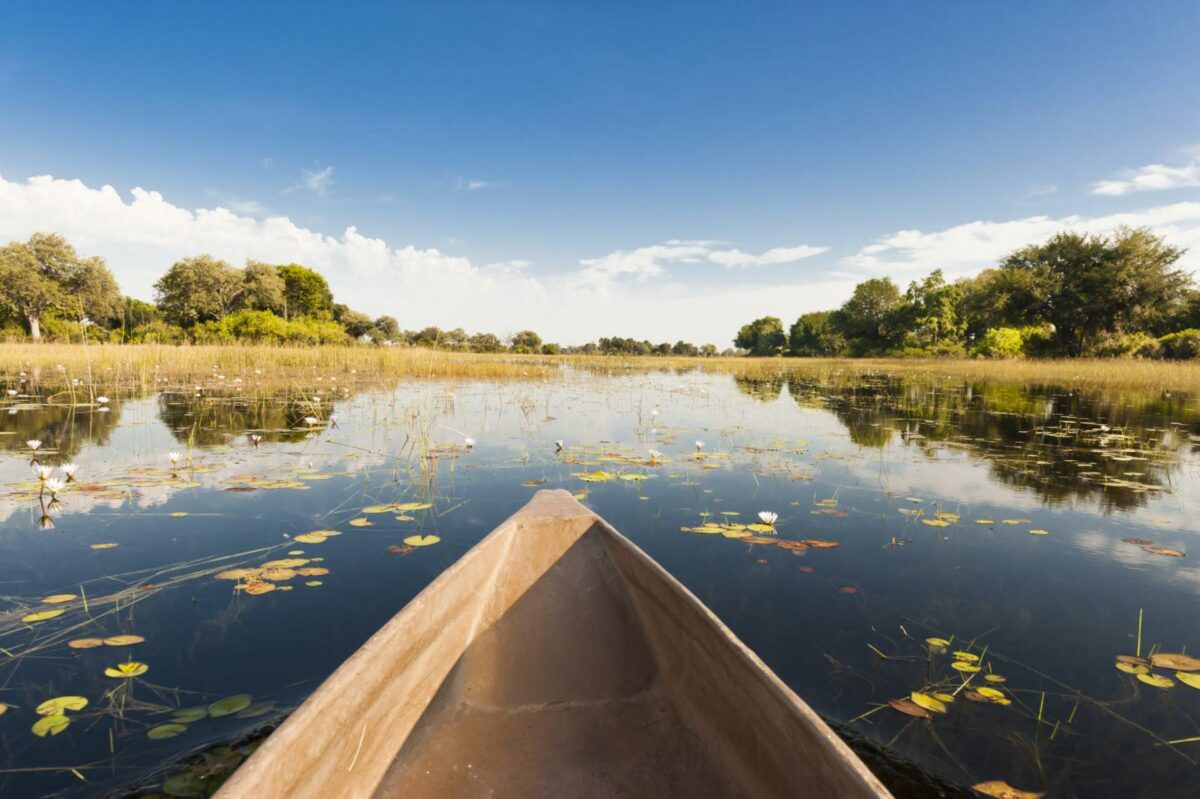 As of 2021, Botswana’s GDP stands at 17.6 billion USD. Botswana was on an upward trajectory in terms of annual GDP growth ranging from 3-4% until a sharp drop in the last year, owing mainly to the impact of COVID-19. According to the African Development Bank outlook, Botswana’s real GDP growth is estimated to grow by 7.5% in 2021 and 5.5% in 2022.

Botswana is a leading exporter of diamonds and relies heavily on precious stones, coins, pearls, and metals making up a whopping 87.2% share of all exports for the year 2021, followed by electronic equipment (3.0%), live animals (2.6%) and inorganic chemicals (1.3%). The top export destinations for the year included the UAE (26%), Belgium (23%), India (17%) and South Africa (9.1%). Diamonds and precious stones also comprise, as of 2021, 24.0% of Botswana’s imports due to beneficiation and to make local diamond production profitable. Botswana’s other major imports are mineral fuels and oils (13.2%), machinery, mechanical appliances and parts thereof (7.2%) and automotive vehicles excluding trams and railways (7.0%). The largest importers of Botswanan products as of 2021 are South Africa (55%), followed by Belgium (14%), the UAE (4.8%) and India (4.8%).

Due to Botswana’s affluence in such resources, mining of diamonds, precious stones and metals is an interesting investment sector, and the state of Botswana is actively encouraging collaboration opportunities ranging from mining ancillary support services like banking and security to spinoff projects such as hotels, restaurants, and transportation services. Botswana’s landlocked geographical position in the center of the South African Development Community (SADC) and position as the third largest logistic operation environment in the region provides fruitful circumstances to promote construction of land corridors and infrastructure as an alternative to the other congested SADC corridors.