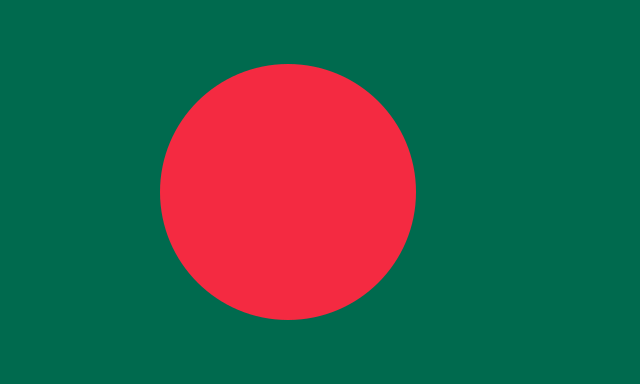 Bangladesh, officially called the People’s Republic of Bangladesh, is a country located in the delta between the Padma River, the main distributary of the Ganges flowing southeastward, and the Jamuna River, the lower stream of the Brahmaputra River that originates in Tibet. It is bordered by India on its northeastern and northwestern border, Myanmar towards the southeast, and towards the south lies the Bay of Bengal. Bangladesh ranks 11 globally in terms of population density. The Bengali people are historically of diverse origin, having emerged from the confluence of various communities that entered the region over the course of many centuries. 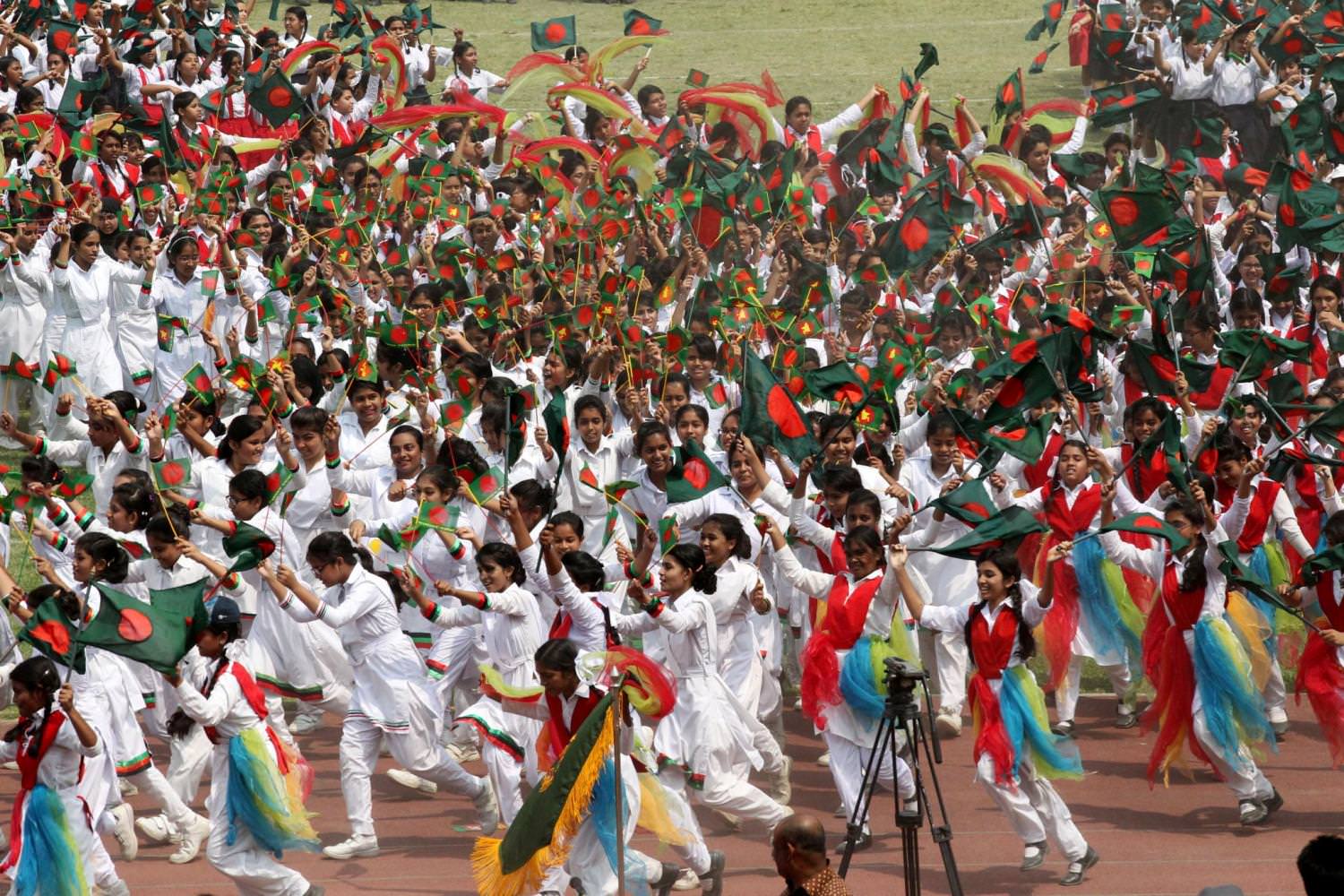 According to July 2021 estimates, the population of Bangladesh was 166,303,498, and the most populated city is the capital, Dhaka, with an estimated 10.3 million inhabitants. 61% of the population lives in rural areas due to its agriculture heavy economy. 45% of the country’s population is aged 24 or below.

98% of the population are Bengali, Indo-Aryan people that descended from the people who lived in the region of Bengal since the era of the united Indian subcontinent and are the 3rd largest ethnic group globally. The remaining 2% is made up of over 54 indigenous groups, the largest of which are Bihari (0.3%), Chakma (0.3%) and Meitei (0.1%).

In the 14th century, Shamsuddin Ilyas Shah, a high ranking official in the Delhi Sultanate, was central in unifying the independent principalities of Gangaridai, Vanga, Gauda, Pundra, and Samtata among a few more.  In 1576, when the Mughals took control, they further added the territories of Bihar and Orissa thus creating the Subah Bangalah.  The Mughals ruled over Bengal and focused on cultivating an agricultural economy, and although the Mughals did not enforce Islam, they did give preference to Muslim settlers for land grants. Nonetheless, the social interaction between Muslims and Hindus, especially of the Caitanya sect, showcased their good relations in Bengal under the Mughal Empire.

The Mughals began to decline in influence in the early 18th century, and during the Battle of Plassey that took place on 23rd June, the British forces led by Robert Clive won a decisive victory over Siraj ud-Daula, the Nawab (governor) of Bengal, after which Bengal came under the British administration. Under Governor General Charles Cornwallis who served between 1786 and 1793, changed the name of the region to the Bengal Presidency, and gave property rights were given to the local population who were called zamindars (landlords), which indirectly created a new middle class termed the “bhandralok”, who later became notable advocates for Indian independence. Due to the persisting administrative issues, then Viceroy Nathaniel Curzon partitioned Bengal into a predominantly Muslim Eastern Bengal with Dhaka as the capital, and Hindu majority West Bengal with Calcutta as the capital; this decision. This partition was heavily criticized by the Indian National Congress although the Muslims partially supported it, as the All-India Muslim League was established in Dhaka in 1906 and managed to attain separate electorates and constituencies for Muslims under the 1909 reforms. The partition was however, annulled in 1911, Bihar and Orissa becoming a new province and Assam being reverted to its previous status.

After the failure of the non-alignment movements, the Khilafat Movement led by Muslims and the Non-Cooperation Movement led by Mahatma Gandhi, Chief Minister of Bengal Fazl-ul-Haq set up the Krishak Poja (Peasants and Tenants Party and formed a coalition with the Muslim League, proposing the “Pakistan Resolution” in 1940. In the 1946 legislative elections the Muslim League was under the leadership of Hussain Shaheed Suharwardy who became the chief minister of Bengal after Haq. He, along with notable Bengalo politicians like Sarat Chandra Bose advocated for a united independent Bengal, which was supported by the Muslim League and Viceroy Mountbatten, but not Gandhi and the Congress Party. Ultimately, when British rule ended in August 1947, East and West Bengal were divided between India and Pakistan respectively.

East Bengal became the Eastern wing of Pakistan until its separation from the latter following the Indo-Pak war of 1971, after which it officially became current day Bangladesh in December 1971. In January of the following year Awami League, which split from the Muslim League in 1949 in response to the centralization of government in then-West Pakistan, chose its leader Sheikh Mujibur Rehman as the first Prime Minister and Abu Sayeef Choudhry as President. In 1973 the Bengali constitution was revised which made the country a secular state with a parliamentary form of government within the Commonwealth, and joined the Non-Aligned Movement, the Organisation for Islamic Cooperation (OIC), and later in 1947, the United Nations. In a coup in November 1975, Major General of the Army Zia-ur-Rehman came to power and to justify his legitimacy held a referendum in 1977, after which he received a vote of confidence and became President in 1978. He made notable achievements in developing law and order, food production, primary education and rural development, and his efforts led to the creation of the South Asian Association for Regional Cooperation in 1985. In the general elections of 1985 civilian Vice President Abdus Sattar became President, however due to his illness he was overtaken by Lieut. General Hussein Mohammad Ershad who won elections in 1986 due to the boycott of elections by opposition parties. By 1990, anti-government demonstrations and an ailing economy forced Ershad to step down and in elections held two months later in February 1991, Bangladesh elected their first female Prime Minister, leader of the Bangladesh National Party and widow of General Zia, Khaleda Zia. She reinstated the parliamentary constitution and advanced economic and educational reform programs. She stepped down in 1996 and was replaced by Awami League leader and ex-Prime Minister Mujib’s daughter, Sheikh Hasina Wajed. She lost power to Khaleda in the 2001 elections, but won once more in the elections of 2008, and currently still serves as Bangladesh’s Prime Minister.

1947 British colonial rule over India ends. A largely Muslim state comprising East and West Pakistan is established, either side of India. The two provinces are separated from each other by more than 1,500 km of Indian Territory.

1949 The Awami League is established to campaign for East Pakistan’s independence.

1971 Independence after a nine-month war, with India backing the Bengali nationalists against Pakistan.

1973 First parliamentary elections give the Awami League a landslide victory.

1996 – Awami League returns to power under with Sheikh Hasina Wajed, the daughter of Sheikh Mujibur Rahman, as Prime Minister.

2004 Parliament amends constitution to reserve 45 seats for female MPs in May.

2008 Awami League captures more than 250 of 300 seats in parliament in December elections. Sheikh Hasina is sworn in as prime minister in January once more.

Bangladesh is a unitary republic with a parliamentary democratic system whereby the President is the head of state, and the Prime Minister is the head of government. The Parliament of Bangladesh is called the Jatiya Sangsad (House of the Nation); it is unicameral with 350 seats elected via direct elections. Some seats are reserved for women that are elected by the Parliament itself. The Parliament is also responsible for electing the President who serves a 5-year term. The President then appoints the Prime Minister based on parliamentary elections that are arranged by the Election Commission.

Bangladesh’s jurisdiction and basic laws are based on the common law, besides family laws relating to marriage and inheritance which are based on religious scripts that differ amongst different religious communities. The Bangladeshi Supreme Court has two divisions, the Appellate Division, and the High Court division. The state also has two kinds of magistrate courts which are the Executive Magistrate and the Judicial Magistrate, the latter of which are of four types on the district level.

Bangladesh’s economy has been steadily growing at an average of 6% since the year 2005. More than half of the GDP, almost 55% in 2020, comes from the services sector and while agriculture provides 12.6% to the GDP it has employed almost half of the population, albeit on a downward trend (37.5% in 2020) with rice being the main product. The industrial sector employs 21% of the population currently and contributes 29% to the GDP as of 2020, relies mainly on the production and export of garments, which makes up more than 80% of total exports. The garment industry and the remittances from overseas citizens accounts for Bangladesh’s rising foreign exchange reserves. 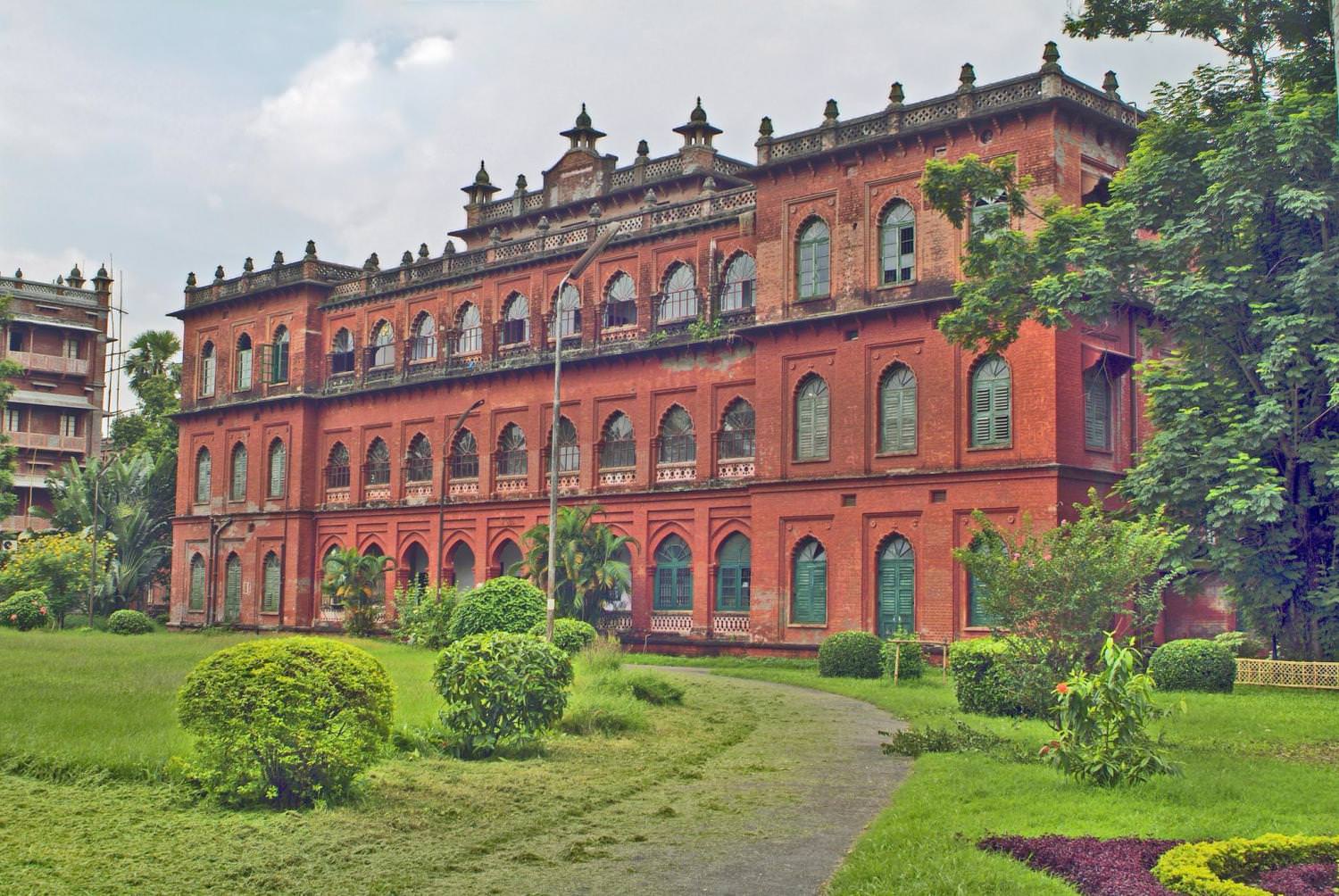 Bangladesh’s GDP in 2021 stood at US$416.2 billion. For the same year, knitted or crocheted articles of apparel and clothing accessories (47.5%) and non-knitted and non-crocheted articles of apparel and clothing accessories (36.6%) made up the predominant portion of exports. Other notable commodities included other made-up textile articles; sets; worn clothing and worn textile articles; rags (2.8%) and footwear, gaiters and the like; parts of such articles (2.4%). The major export destinations for Bangladeshi exports in 2021 were the United States (16.6%), Germany (15.9%), France (6.8%) and Spain (6.8%). In terms of imports, Bangladesh mainly imported cotton (11.9%), mineral fuels, mineral oils and products of their distillation (9.5%), machinery, mechanical appliances, nuclear reactors and boilers (9.3%) and electrical machinery, equipment and parts thereof (6.4%). These imports were largely sourced from China (32.9%), India (19.3%), Singapore (4.9%) and Indonesia (3.9%).

Bangladesh has signed the Preferential Tariff Arrangement-Group of Eight Developing Countries, half of which are Commonwealth member countries and the Asia-Pacific Trade Agreement which includes Commonwealth members India and Sri Lanka. The nation is also the signatory of the Asia Pacific Trade Agreement (APTA), the Global System of Trade Preferences among Developing Countries (GSTP), the Protocol on Trade Negotiations, the South Asian Free Trade Arrangement (SAFTA) and the South Asian Preferential Trade Arrangement (SAPTA).

Bangladesh’s stable and high growth rate average of 6% showcases the strength of its economy and competitive position in the global value chain. It has a low-cost labour force, and its geographic locations lends to its attraction for investment as it can serve as a gateway to other countries of the Asia-Pacific. However due to its reliance on the textile industry and raw agricultural products, it has an enormous potential and need for commodity and sector diversification.

The government is actively encouraging investment in the agri-business sector, specifically investment in farming machinery, post-harvest infrastructure and food processing of vegetable oils, rice, sugarcane, and spices. Bangladesh produces electronics and electrical equipment mostly for domestic use but only produces 11% of local demand which presents a huge import substitution opportunity. Regarding the energy sector, currently only 2.5% of electricity produced is renewable and as the population becomes more urbanized, the need for more energy will increase considerably. Therefore, investment is required for the construction of renewable energy generating facilities. Other sectors lucrative for foreign investment opportunities include (but not limited to) tourism, ceramics, leather, plastic, and ship building.