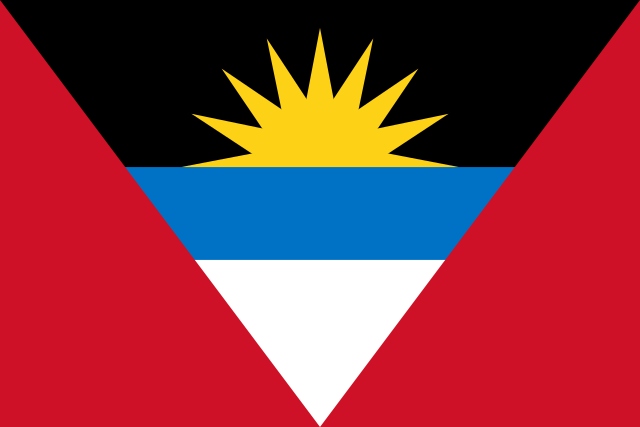 ​Antigua and Barbuda are islands that are collectively an independent state located in the Lesser Antilles in the eastern side of the Caribbean Sea, to the south of the Leeward Islands chain. Antigua’s coastline provides divergent landscapes; from bays and headlines adorned by reefs and shoals lining several inlets like the Parham and English harbour, to volcanic rocks rising to 405 metres at Mount Obama in the west. Antigua has a notable absence of mountains and forestry that sets it apart from other Leeward Islands. The capital of Antigua is St John’s which has a deepwater harbour allowing anchorage for shipping.

Barbuda, formerly known as Dulcina, resides 40 km north of Antigua. A coral island, flat with highlands that rising to 143 feet at Lindsay Hill to the northeast. It has an overall area of 161 square km). Barbuda is without streams or lakes and receives less rainfall than Antigua. Codrington, the only settlement located in the west, lies on a lagoon.

The territory also includes one dependency, the small island of Redonda, and an uninhabited rock that lies 40 km southwest of Antigua. It is said to have rich phosphate deposits. 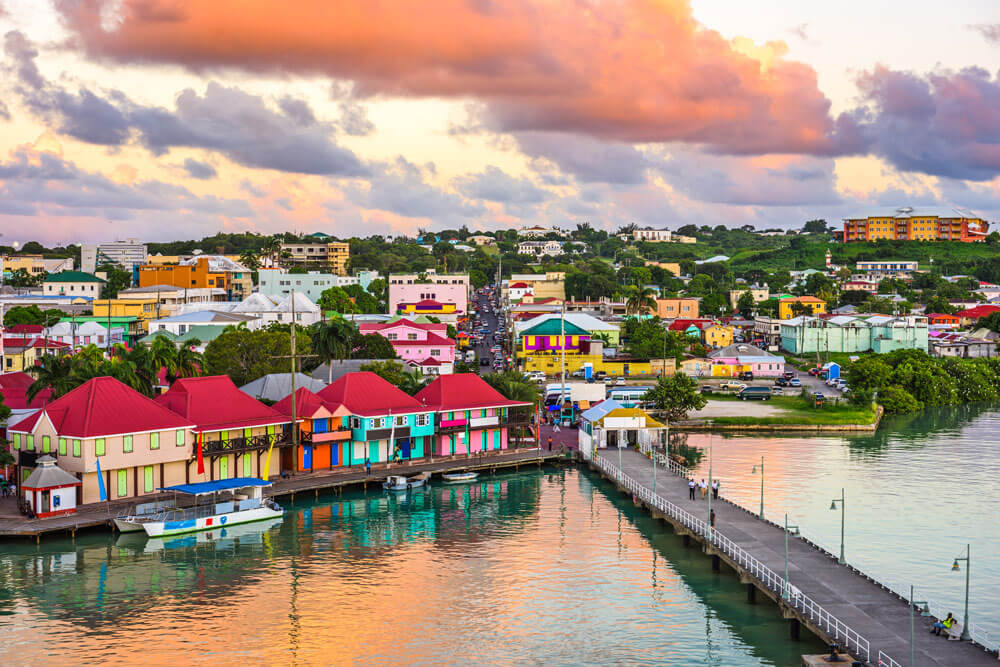 Antigua and Barbuda have a collective population of 98,778, the 4th smallest population globally, of which nearly 25,000 live in the capital of Saint John’s and it is estimated that around 26% of the population is urban. Most of the population is of West African, British and Madeiran descent. The distribution is 91% Mulatto or Black, 4.4% mixed race, 1.7% white and 2.9% other (mostly East Indian and Asian). Most of the white population are of British or Irish descent. The official language of the Islands is English although Antiguan Creole is also spoken by the majority. Around 65% of the population is Christian; the single largest denomination being Anglicanism although there are also large proportions of Seventh-day Adventists, Pentecostals, Moravians, and Methodists. The remaining population consists of Christian Levantine Arabs, Asians, and Sephardic Jews.

A large number of the population lives abroad in the United Kingdom, the United States and Canada. Interestingly, about 4,500 Americans live in Antigua and Barbuda, making it one of the largest American populations in the Eastern Caribbean.

On November 1, 1981, Antigua and Barbuda became an independent state. The state obtained United Nations and Commonwealth membership and joined the Organization of Eastern Caribbean States. The post-independence political landscape of Antigua and Barbuda remained relatively stable.

Prior to the country’s independence, Antigua was visited in 1493 by Christopher Columbus, who named it for the Church of Santa Maria de la Antigua in Sevilla, Spain. The nearby island of Barbuda was colonized by British settlers in 1678 and eventually the crown granted the island to the Codrington family in 1685. Barbuda reverted to the crown in the late 19th century, and its administration came to be so closely related to that of Antigua that it eventually became a dependency of that island

When the West Indies Federation was dissolved in 1962, Antigua persevered with discussions of alternative forms of federation due to which an amendment was made in the West Indies Act of 1967 for Antigua to assume a status of association with the United Kingdom on February 27, 1967. As an associated state, Antigua was fully self-governing in all internal affairs, while the United Kingdom retained responsibility for external affairs and defense.

In 1978 Antigua reversed its position and announced it wanted independence.

1493 – Christopher Columbus visits Antigua and names it after the Church of Santa Maria de la Antigua in Seville, Spain.

1967 – Antigua and Barbuda becomes a self-governing state within the British Commonwealth, with Britain retaining control of defence and foreign affairs.

2013 – Antigua wins World Trade Organization permission to suspend American copyrights and patents, in a possible retaliatory response to US restrictions on the island’s online gambling industry.

Antigua and Barbuda Islands has a constitutional monarchy with a parliamentary form of government. The British monarch is nominal head of state, represented by a governor-general. The constitution allows for a two-chamber legislature, consisting of a Senate and a House of Representatives. Executive power is vested in a Council of Ministers headed by the prime minister, who is the head of government.

The legal system of Antigua and Barbuda is based on common Law although the Eastern Caribbean Supreme Court, with headquarters in St Lucia, is responsible for the administration of justice in its member states, which includes Antigua and Barbuda. The judiciary, consisting of inferior and superior courts, holds the responsibility for decisions over cases. The Court of Appeal is itinerant.

The High Court consists of 16 judges, two of whom permanently reside in the country and sit in the court of summary jurisdiction. The High Court’s jurisdiction includes fundamental rights and freedoms, and constitutional issues. Less serious cases are handled by the magistrates’ court. In terms of the judiciary, the final appellate jurisdiction is currently the UK Privy Council; however, there are plans to enable the Caribbean Court of Justice to fulfil this role eventually.

Agriculture, the traditional economy of Antigua, is now largely superseded by tourism and focuses on the domestic market, although even that is constrained by a limited water supply and a labour shortage stemming from the lure of higher wages in tourism and construction. The inhabitants have for generations been fishermen and subsistence farmers, cultivating fruits and vegetables, with manufacturing playing a small role in the economy. Most activity involves processing agricultural products and making clothing and textiles, and concrete blocks.

Prior to COVID tourism dominated Antigua and Barbuda’s economy, accounting for nearly 60% of GDP and 40% of investment in 2019, while agriculture and manufacturing contributed 1.8 % and 2.3% to GDP, in 2019, respectively. COVID-19 has severely impacted the country’s economy as bustling tourism ground to a halt for 1.5 years, not to mention the impact on the telecom sector, a heavy contributor to the country’s services sector GDP. Fortunately, due to the cabinet minister Asot Michael’s pandemic prevention measures, the state was able to contain cases well and reopened borders back in June 2020. Now tourism is bouncing back and is estimated to overtake pre pandemic levels by next year. Prospects for economic growth in the medium term will continue to depend on tourist arrivals from the US, Canada, and Europe. To promote intra-regional economic activity, the government of Antigua and Barbuda requested the state of Barbados to cut airport taxes by 50% for regional travellers; a request that was approved and ratified on July 20, 2021. 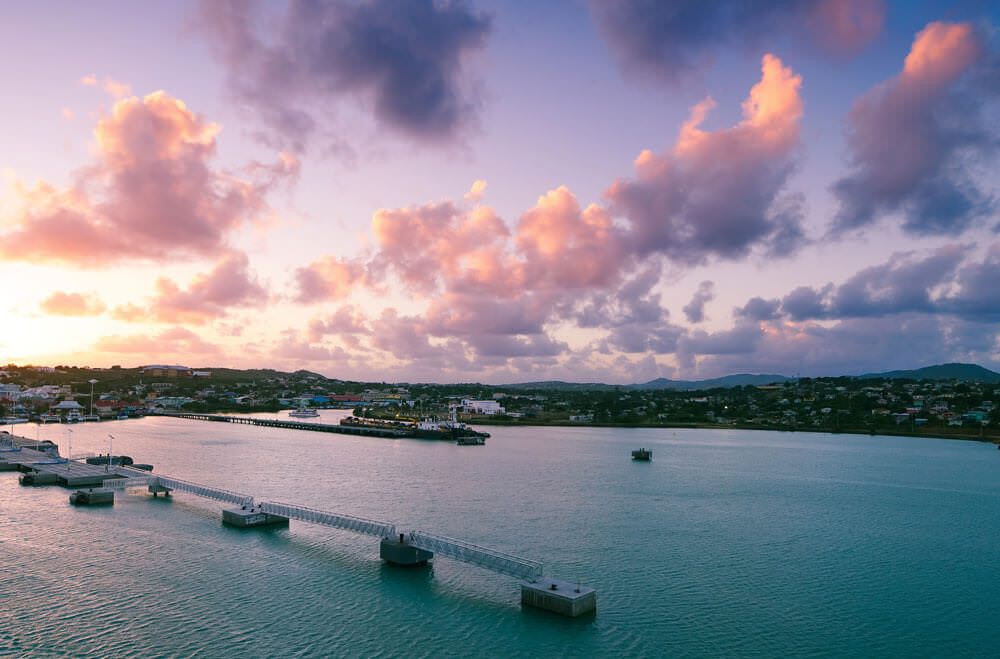 The GDP of Antigua and Barbuda for 2021 was estimated to be US$1.47 billion. The top exports for the year included mineral fuels, mineral oils and products of their distillation (26.2%), beverages, spirits and vinegar (17.5%), fish, crustaceans, molluscs and other aquatic invertebrates (14.5%) and vehicles other than railway/tramway rolling stock (7.5%). The main export destinations were the Netherlands (19.2%), The Bahamas (10.7%), China (10.3%) and Sint Maarten (9.9%). The top imports for 2021 were machinery, mechanical appliances, nuclear reactors and parts thereof (10.8%), electrical machinery, equipment and parts thereof (6.6%), vehicles other than railway/tramway rolling stock (5.1%) and meat and edible meat offal (4.8%). These imports were predominantly sourced from the United States (53.1%) along with China (5.3%), Trinidad and Tobago (4.6%) and the UK (3.5%).

Antigua and Barbuda is a signatory of the Caribbean Forum of ACP States (CARIFORUM) and the Caribbean Community and Common Market (CARICOM).

The government of Antigua and Barbuda is expanding avenues for investment by foreign nationals and companies to spur growth via offshore banking. One avenue is the New Citizenship Program. This program was launched in 2013 whereby foreign nationals can gain a second passport from Antigua and Barbuda provided they either i) contribute US$100,000 to the Antigua National Development Fund ii) invest US$1.5m in establishing a business iii) invest US$400,000 in a government approved real estate project (US$200,000 with local connections) or iv) make an investment of US$150,000 to the University of West Indies for a family of (at least) six members. This option will entitle one member of the family to a one year, tuition only, scholarship at the University of the West Indies.

A second initiative that was launched in October 2020 is the “Nomad Visa Program”. This program provides “digital nomads”, foreign nationals using telecommunication technology to work remotely in foreign countries, a long-term visa of up to 2 years (for the first instance; renewal subject to review by the government) as a ‘special resident’. This is a very attractive program for businesspeople looking to work remotely as Antigua and Barbuda provides a safe political environment, data confidentiality with sound telecom infrastructure and transport system. The visa requires a one-off payment of US$ 1,500 per individual nomad but overall, the process is simple and straightforward. Antigua and Barbuda also provide the opportunity for foreign individuals to establish their own bank with a US$500,000 investment to cater to own business or an international business with US$3 million investment.

The COVID-19 pandemic has highlighted the need for states to diversify avenues of foreign exchange and ensure robustness of the domestic economy and labour force of residents. The government of Antigua and Barbuda is focusing on this mission to reduce risks and vulnerabilities of becoming a “one crop economy” and not gain majority of its revenue from just tourism alone. The government has made it their mission to enhance the skills of its labour force and have an export led growth of its economy to sustain balanced growth that can withstand natural disasters or economic recessions. A priority industry for investment needs is the information technology (IT) sector wherein the state seeks to make Antigua and Barbuda have state of the art e-commerce, call centres, international data services and business processing operation facilities. Back in 1998 Antigua and Barbuda had one of the highest ICT export values (39 million USD), and the hope is to surpass it and become a global leader once more.

Agriculture is a sector with a huge potential as the twin islands have the largest exclusive economic zone (EEZ) that can be used for fishing, the “Black Pineapple” that is a native commodity sold at premium price in countries like Norway, poultry and the rare product that is ‘sea-island cotton’. The government has begun the “National Backyard Gardening Programme” to encourage citizens to produce 4 million pounds of food in their own gardens annually. Other priority industries include manufacturing and assembly of electronic products, high quality textiles, leather, and food processing industries.

A key investment opportunity being promoted by the government of Antigua and Barbuda is the Free Trade and Processing Zone (FTPZ). Established under the FTPZ Act of 1994, the FTPZ was created under the initiative to diversify the economy and enhance certain sectors with growth potential. The FTPZ is fitted with modern high-grade utilities and infrastructure with a prime location just 5 minutes away from St John’s and the V.C Bird international airport. Investors with an approved license to operate in the FTPZ are entitled to establish commercial activity specified in the licence without having to obtain any permit. Investors are exempted from the payment of taxes imposed by the Government in respect of any industrial activity within the FTPZ, duties on the importation of equipment needed to construct and operate facilities, import taxes on raw materials and goods, payment of income tax, payment of taxes of any kind on the repatriation of profits earned in the Free Trade and Processing Zone.