The Gambia is the smallest mainland African country and is situated either side of the Gambia River. The country’s capital, Banjul, lies at the mouth of the river and hosts most of the country’s trade. Although the Gambia is small, its population growth is one of the highest in western Africa. A large majority of Gambians live in rural villages throughout the country however more young people have moved towards the capital in recent years. 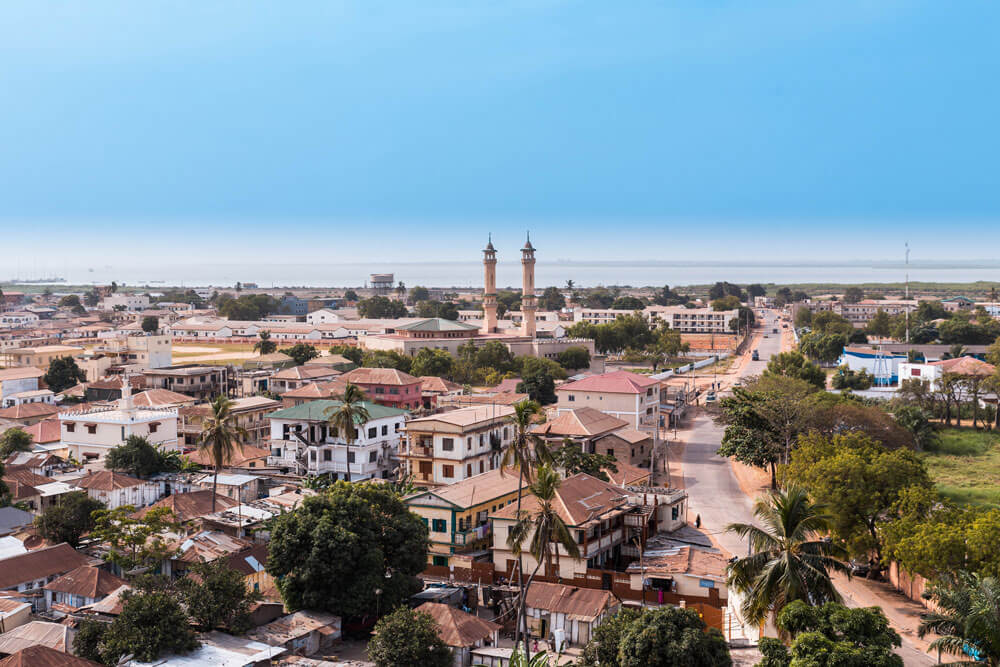 As of July 2020, the Gambia’s population totalled an estimated 2.2 million with a population growth rate of 1.87 percent estimated for 2020. The country is home to a youthful population, with more than 60% being under 30 years of age, and a majority of the population live in urban areas (61.9 percent), an increase from 50 percent in 2016, a trend which has been driven by high rural-urban migration and high population growth.

The Gambia’s GDP reached 1.76 billion in 2019, dominated mainly by services (65.8 percent), of which tourism plays a pivotal role, contributing in itself around 20 percent to GDP and employing around one fifth of the population. In 2019, economic growth reached 6 percent mainly led by a strong tourism industry and other services.

Meanwhile, the agriculture sector accounts for around 20 percent of GDP, in particular peanut or groundnut farming and exportation, although the production of rice has also gained some traction in recent years through Government encouragement. In terms of employment, around half of the labour force are employed in the agriculture sector and it is expected to continue to play a key role in the economy given the untapped potential of the sector owing to less than half of arable land being cultivated as of January 2020. There is also potential for commercial fishing opportunities on the Atlantic coast of The Gambia and in the river with correct equipment.

As for industry, it contributes around 15.6 percent to GDP, with manufacturing comprising around 5 percent, primarily focused on agriculture-based manufacturing and supplying the domestic market.

The Gambia is a member of the World Trade Organisation and in 2018, had 120 different import partners and 38 export partners, with Mali importing a majority of Gambian exports.

In 2018, Gambia’s exports of goods totalled US$118 million, with the main export being coconuts, brazil nuts and cashews (31.1 percent), followed by rough wood (12.7 percent) and non-fillet frozen fish (8.28 percent). The top export destination in 2018 was India, accounting for just under 40 percent of all exports, followed by China (17 percent) and South Korea (8.4 percent). As for exports of services, they totalled US$196 million in 2018, predominately comprising travel services (78.2 percent), followed by transport services (16.1 percent).

Meanwhile, the Gambia imported a total of US$1.64 billion of goods in 2018, mainly comprising refined petroleum (16.5 percent) and light pure woven cotton (11.3 percent). The majority of imports in 2018 came from China (26.7 percent), followed by Cote D’Ivoire (16.8 percent) and India (9.14 percent). Meanwhile, the Gambia imported approximately US$101 million in services in 2018, mainly composed of transport services (77.2 percent) and insurance and financial services (11.9 percent).

The nation has applied the ECOWAS Common Customs Tariff, which varies between four separate rates. During harvesting season, there is an additional tariff added to imports on agricultural produce such as potatoes and onions.

The Gambia’s legal system relies on English common law and custom, which is applied by both Magistrate Courts, Courts of Appeal and a Supreme Court, amongst others. As the country hosts a large Muslim population, The Gambia respects the implementation of Shariah law in its Cadi Court.

Banjul has great potential as a fishing port, however the lack of necessary fishing equipment in the Gambia has made it difficult for local fishermen to capitalise on this resource.

Local farmers and entrepreneurs in the Gambia would benefit from agriculture investment in diversifying their crops using sustainable and environmentally friendly products and distribution services. Farmers have the potential to produce more than what is currently harvested, and could expand to rice, sugar and milk.

In an effort to minimise damage to the Gambian environment, the Government implemented a policy to ban the importation and use of plastic bags in the country in 2015. This has kick-started a number of local sustainable projects, which would benefit from foreign investment. Similarly, green energy projects in the Gambia may be attractive to investors, considering the accessibility of the Gambian River and the country’s position on the Atlantic coast.