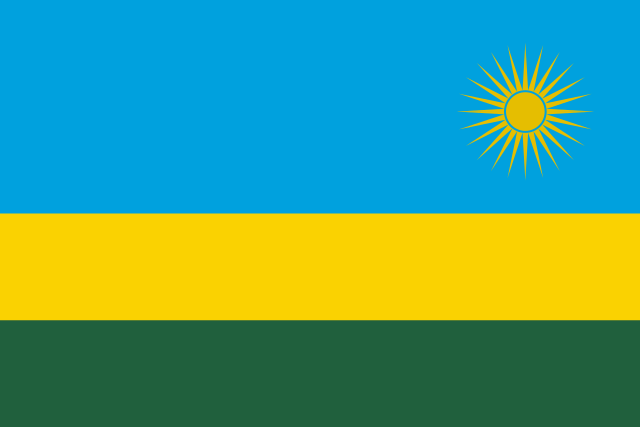 The landlocked east-central African country of Rwanda is located below the Equator and is encircled by Uganda to the north, Tanzania to the east, Burundi to the west and the Democratic Republic of Congo to the west. Rwanda has one of the smallest African countries with the highest population density in sub-Saharan Africa at a rate of 525 people per kmsq with its capital, Kigali, housing the largest population out of all Rwandan cities. Rwanda is known for its stunning and diverse natural beauty and rich historical culture expressed vividly through music and dance. Referred to in French as le pays des mille collines or “the land of a thousand hills” as well as a “topical Switzerland”, Rwanda has vast chains of mountains across the north-south axis and constitutes a significant section of the Congo-Nile divide. It harbours the volcanoes of the Virunga Mountains, including the stratovolcano Karisimbi, in the northwest with peaks reaching up to almost 15,000 feet that drop by 4,000 feet into the swamp-like terrain of the Kagera River valleys into the east. Travelling inwards, Rwanda has interior highlands of valleys and gentle stretches of hills that ebb towards a low-lying depression sharply west of Lake Kivu.

Rwanda is the most recent country to have become a Commonwealth member. Rwanda was due to host the Commonwealth Heads of Government Meeting and Commonwealth Enterprise and Investment Council Meetings in June of 2020; however, both have been postponed to 2021 due to the COVID-19 pandemic. 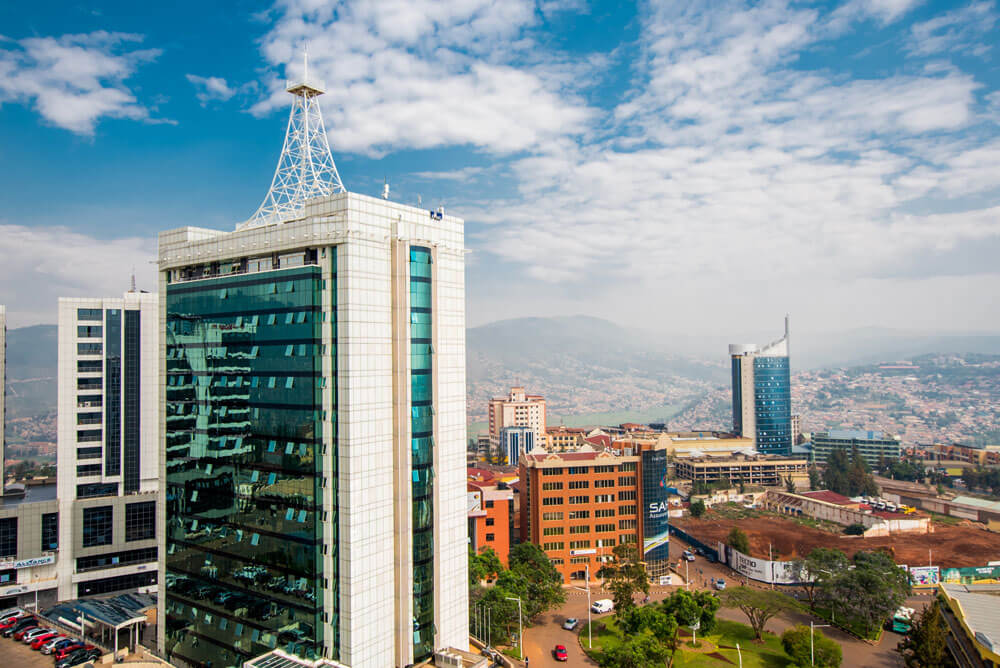 According to estimates taken in July 2021, Rwanda’s population stands at 12,943,132 with a population growth rate of 1.8%. Only 17.6% of the total population lives in urban areas although Rwanda currently boasts a high urbanisation rate of 3.07% annually. Rwanda has one of the most youthful populations across the world, 60% of its population being under the age of 25 and the median age of Rwanda is pegged at 20 years.

The entire Rwandan population comes from the people of Hutu, Tutsi and Twa. English, French and Swahili, although official languages in Rwanda, are only spoken by an estimated 0.2% of the population (mainly for diplomatic or commercial purposes); Kinyarwanda, which is also an official language, is considered the lingua franca as 93.2% of the population converses in it. In regards to religion, Rwandans are predominantly Christian; 57.7% are Protestant and 38.2% are Roman Catholic. The remaining demographic practices Islam (2.1%), with the rest belonging to other religions or are atheists.

Between the 5th and 11th centuries AD, the territory of modern-day Rwanda was originally settled by the Twa, one of the most well-known Pygmy groups that inhabited equatorial Africa and lived mainly in the mountains and grasslands surrounding Lake Kivu. They were eventually ousted by the Bantu speaking Hutu people. The Hutu remained there until the 14th century when they were gradually infiltrated and subjugated by the Tutsi people who did not use force but implemented a classist feudal relationship due to their comparative advantage of possessing cattle. By the 16th century, the Tutsi had finished migrating from the north into the central regions, forming a small kingdom that remained in power until the arrival of the Europeans in the 19th century. The Tutsi King, who was called the Mwami, was considered divine due to him belonging to the lineage of the mythical Tutsi clan leader, Kigwa, who was said to have fallen from heaven onto Earth by accident. It was Mwami Mibambwe I Mutabazi who was king at the time of the rise of the Tutsi and it is stated that he was the one who centralised the monarchy. His descendent and Tutsi king in the 19th century, Mwami Kigeri, demarcated the borders of modern-day Rwanda.

European exploration into the region began in the mid-1800s but although explorers including Sir Richard Burton and Henry Morton Stanley traversed close to Rwanda, they never actually penetrated the territory. In 1885 during the Conference of Berlin, the territory of Burundi and Rwanda were declared as German spheres of influence, and in 1894 Count von Gotzen was the first German to arrive in Rwanda, and he later became the governor of German East Africa. This was not a seamless transition; the Germans had to battle with the Belgians under Leopold II and also the British until the European Convention of Brussels in May 1910 explicitly put Rwanda and Burundi under german East Africa under the condition that Germany would completely withdraw from Uganda. After the defeat of Germany in World War 1, Rwanda was given to Belgium under the League of Nations mandate in 1919 and was governed as a single administrative entity along with Burundi. When the League of Nations was replaced by the United Nations and in 1952 the Belgian mandate over Rwanda was altered and included an obligation to integrate Rwanda into the political process. Belgium thus introduced the Ten-year Development Plan which was a set of socio-economic reforms aimed at increasing the local population’s political representation. Later on, the Trusteeship Council recommended that Rwanda and Burundi be allowed self-governance and made into one collective state; however, this was not successful due to long-term animosity between the two states. Ultimately, on 27 June 1962, the Belgian Trusteeship was annulled and Rwanda gained independence.

Gregoire Kayibanda of the Party of the Hutu Emancipation Movement (PARMEHUTU) was appointed President and a new constitution was created and in 1964 the economic union between Rwanda and Burundi was scrapped. Rwanda subsequently introduced its own currency, the Rwandan franc. Kayibanda was re-elected in the 1969 elections until he was overthrown in 1973 by General Juvenal Habyarimana who then scrapped the constitution. A new constitution allowing political opposition parties was introduced by him in 1991. 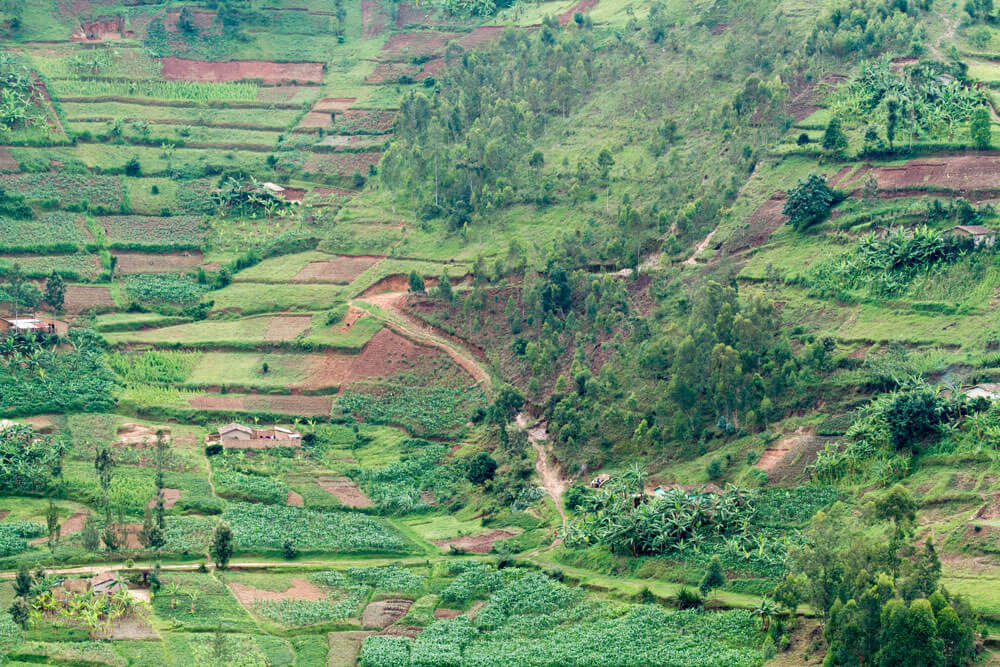 Under the constitution of 2003, Rwanda is a semi-presidential and multiparty republic with the President serving as the head of state for a 5-year term that is only renewable once as of 2017. The President, in turn, selects the prime minister who is the head of government. The government of Rwanda is divided into the Executive, Legislative and Judiciary branches; the President being the executive head while the prime minister is the head of the Council of Ministers. The Legislative branch consists of a bicameral legislature and the Senate as the upper house. The Senate has 12 members indirectly elected by regional councils, 8 members appointed by the President, 4 members appointed by the Political Organizations Forum (POF), and 2 members are selected by Institutions of Higher Learning.

Rwanda’s judiciary is based on a mixed legal system, which has strong links to the German and Belgian civil codes. It also respects customary law and legislative acts from the Supreme Court. Most claims start in the courts of the first instance or the provincial courts. They can progress to the Court of Appeal and furthermore to the Court of Cassation. The Constitution grants power to the executive for the president to appoint and dismiss judges.

Rwanda’s economy has developed significantly since Paul Kagame assumed the presidency in 2000. It has been growing at an average rate of 7.5 per cent from 2008 to 2018; in 2019, GDP grew at a rate of 9 per cent to a total of US$10.12 billion. Despite the mountainous terrain, Rwanda relies on agriculture to support its economy. It contributes to 29 per cent of the country’s GDP and employs over three-quarters of the labour force. Rwanda’s industrial sector is also significant; however, its activity centres around agricultural processing. The industry employs approximately 9 per cent of the workforce.

Mining has also proved itself to be a successful sector, as Rwanda is now one of the largest producers of tantalum worldwide. In contrast, the tertiary sector is growing. Through the Government’s ‘Vision 2020’ and ‘Financial Sector Development’ plans, the country aims to bolster its activity in areas ranging from financial services to tourism.

In 2020, Rwanda’s GDP stood at US$10.3 billion. The top Rwandan export products for the year were coffee, tea, and spices (37.3%), ores, slag, and ash (23.6%), and pearls, precious metals, and precious/semi-precious stones (16.0%). The main imported products were electrical machinery and equipment thereof (13.9%), mechanical appliances, nuclear reactors and boilers (7.0%), articles of iron and steel (6.9%), and pharmaceutical products (6.8%). Although the exact share of the value of Rwandan exports to, and imports from, these countries for the year 2020 is not known, Rwanda’s top export partners are the United Arab Emirates, Democratic Republic of Congo, Uganda and the US. Rwanda’s top import sources were China, India, the United Arab Emirates, and Kenya.

Rwanda was the host of the signing ceremony for the African Continental Free Trade Area (AfCFTA) agreement in 2018, being one of the first countries to ratify that agreement which was enforced in May 2019 and trading under the agreement began in January 2021. Rwanda is also a signatory of the Common Market for Eastern and Southern Africa (COMESA), the East African Community and the Economic Community of the Great Lakes and the Economic Community of Central African States.

The Government of Rwanda’s goal is to transform the country into an upper-middle-income country by 2035- and a high-income country by 2050. To do so, Rwanda requires opportunities for growth which is an area of development that could provide mutual benefit to foreign investors looking to invest in the Rwandan people and businesses. Rwanda’s GDP has rebounded from the aftereffects of the pandemic with a robust growth of 10.9% in 2021, the nation also has improved its governance and access to domestic markets of over 10 million citizens of a rapidly growing middle-class. It’s abundant workforce, investor friendly climate and untapped potential of several sectors makes it an ideal hub for foreign investment activity.

The government is prioritising the education and skills development of its people and encourages foreign investors to invest in infrastructural development of Technical and Vocational Education and Training (TVET), incorporating ICT into educational institutions such as the use of e-learning, smart classrooms, digital content development curricula and teacher training in ICT, and setting up of foreign universities with an emphasis on STEM education. To promote foreign investment, the government offers various incentives; a corporate income tax holiday for 7 years on an investment equivalent to US$50 million, accelerated depreciation rate of 50% for the first year and exemption of VAT on imported TVET training materials. Opportunities are also available in the health sector, specifically for the production of pharmaceutical equipment and products as well as the setting up of medical supply distribution companies to ensure that these products are accessible in remote locations. There is also opportunities in medical infrastructure including the construction of clinics, specialty hospitals and diagnostic centres which will also aid in paving the way for medical tourism, a project the government wishes to pursue in the long term with a focus on Oncology, Cardiology, and Nephrology. The same incentives available for investment in the education sector apply to the health sector wherein the VAT exemptions are on imported medical equipment.

For Rwanda to achieve its goal of becoming a regional hub for ICT capacity building and infrastructure to enable service delivery it requires investment to increase its internet penetration rate, broadband capacity and labour force ICT skills for which foreign investment is a top priority. Foreign investors interested in investing in this sector can avail VAT exemption on IT equipment, 15% corporate income tax rate  and a corporate income tax holiday pf up to 7 years for an investment sum of US$50 million of which 30% is in the form of equity in the sector. Furthermore in line with the National Strategy for Transformation (NST1) 2017-2024, Rwanda is hoping to attract foreign business to its Special Economic Zone and 9 Industrial Parks to increase supply of foreign manufactured goods, develop infrastructure and streamline business regulations. Companies with Export Processing Zones (EPZ) status are to be exempted from customs taxes, CIT and VAT for an investor exporting more than 80% of the company’s exports, exemption from import duties and preferential corporate income tax of 15% for those who export more than 50% of production. Other sectors for lucrative investment proposals that may interest foreigners include financial services, agriculture, real estate, tourism, mining and energy.