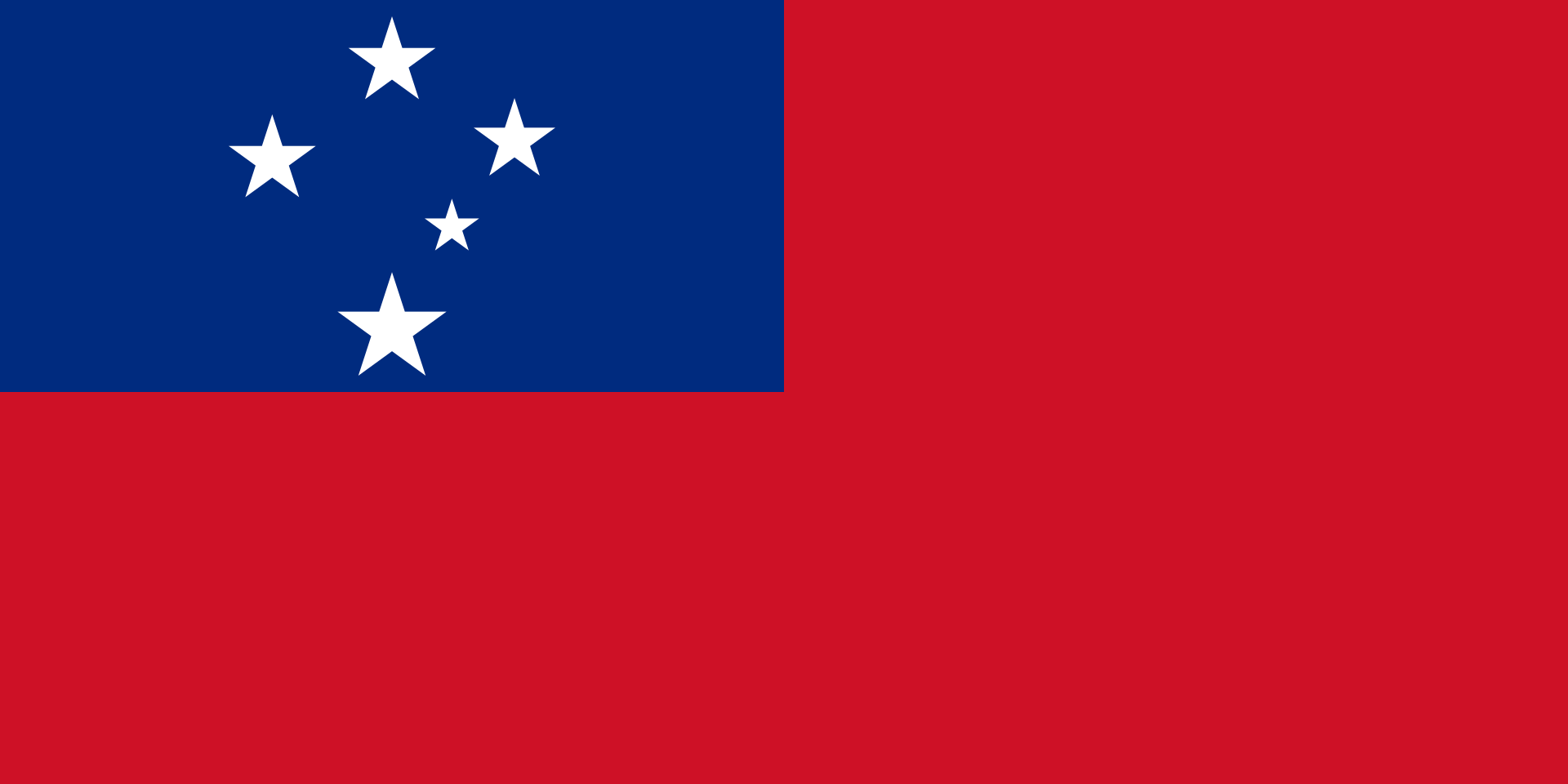 Known as the “Cradle of Polynesia”, Samoa is a small island Polynesian country located in the central area of the South Pacific Ocean and right in the middle of the distance between New Zealand and Hawaii. The state is an archipelago of 9 islands of which only 4 are inhabited- the islands of Savai’i, Manono, Apolima, and Upolu. Samoa is a tropical paradise made of volcanic activity; the islands are wrapped in coral reefs, shallow lagoons and rivers except for shorelines where cliffs have formed due to bleeding lava flows that give way to soils that produce lush vegetation. Inland rainforests and cloud forests house diverse habitats of endangered animals such as flying foxes, lizards, boa-family snakes and a wide variety of other animals. The capital of Samoa, Apia, is located on the second-largest island of Upolu. 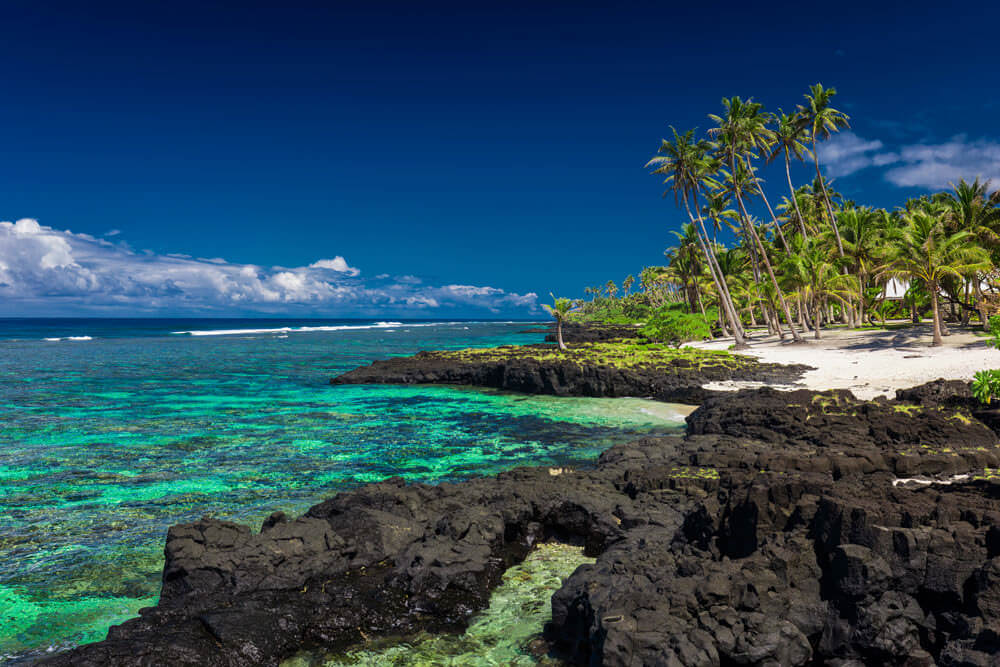 According to July 2021 estimates, Samoa’s population stands at 204,898 with a low population density of 70 per kmsq and a population growth rate of 0.61%. Three-fourths of the entire Samoan population lives on the island of Upolu. 18% of the population lives in urban areas, with the largest urban area being the capital, Apia housing 36,000 citizens. Samoa has a youthful population as almost 50% of Samoans are below the age of 25 years old and a median age of 25.6 years.

96% of the population is Samoan whilst 2% are Samoan/New Zealander and the remaining 2% is made up of other various ethnic groups. The two official languages are Samoan and English; the latter being the lingua franca, spoken by almost 92% of the population, and the latter being used for official and commercial purposes, spoken by approx. 7% of the population. 55% of Samoans practice Protestantism, 19% Roman Catholicism, 43% follow other schools of Christianity, and the remaining makeup various other religions, including Islam and the Baha’i faith.

Based on evidence found in Lapita pottery shards discovered in the Mulifanua Lagoon of Upolu, Polynesian travellers arrived in the Samoan archipelago on outrigger canoes in around 1000 BCE. The Samoan language used then indicated that the settlers were of Tongan origin. By 200 AD, Samoa had become the central settlement of eastern Polynesia as is showcased by numerous legends and genealogies describing the frequent contact between Samoans, Fijians and Tongans. Samoans were known to revolve their society around maritime life; they were proficient in boat building, navigation and fishery as well as in basic agriculture growing yams, taro, bananas, sugarcane and coconuts. The villagers were governed by councils of chiefs who were called matai, and all Samoans family groups were linked by extended blood ties.

European travellers traversed the territory of Samoa for the first time in 1722 and they received a relatively warm welcome from the local Samoans who were intrigued by the technology they brought along. London Missionary Society member, John Williams, established a Christian mission in 1830, successfully converting Samoan conqueror, Malietoa Vainu’upo, and subsequently, his followers also converted. But as the foreign settlement grew, the settlers from Germany, Britain and America began to lobby for the annexation of Samoan land which evolved into battling when America signed a treaty in 1878 allowing for a naval station to be set up at the Pago Pago Harbour (part of current-day American Samoa) due to which Germany and Britain signed similar treaties for the annexation of Western Samoa (present-day Samoa). The great typhoon of 1889 halted the fighting and subsequently, the Berlin Act was passed to ensure the neutrality of the islands. However, this neutrality did not last long. By 1889 Germany had annexed the islands of Western Samoa. In 1908, the orator chief, Lauaki Namulau’ulu, led the Mau e Pule movement for independence against the German troops but were defeated and exiled to Saipan in the Mariana Islands.

When the New Zealand troops occupied Western Samoa in 1914 they were not met with resistance from the Germans nor the Samoans but most of the latter voted against the foreign rule. The League of Nations granted New Zealand the mandate over Western Samoa nevertheless in 1920, and the appointed governor administered the territory without regard to the matai due to which the local business community began an organised political movement termed the Mau, meaning “Strongly Held View” led by half-Samoan half-New Zealander Olaf Frederick Nelson. The violent crackdown on a demonstration in December 1929 during which the matai Tupua Tamasese Lealofi III and supporters were killed sparked mass outrage. New Zealand’s Labour government that came to power for the first time in 1935, gave the Mau legal rights to be a political organisation and in the late 1940s a Western Samoan council of state, as well as a legislative assembly, were established and ultimately in 1954 a constitutional convention met during which government reforms were introduced gradually to work towards complete independence for the Western Samoans. Ultimately in 1962, Western Samoa gained its independence and was the first Pacific nation of its size to do so. Then-reigning monarch Susuga Malietoa Tanimafili II was made the cohead of state, and in 1963 he became the head of state, keeping this title until he passed away in 2007. High chief Fiame Faumuina Mataafa, a pivotal actor in the Mau movement, served as prime minister for two terms from 1962-1970 and 1973-1975 after which paramount chief Tupuola Taisi Efi served as prime minister from 1976-1982. When Tofilau Eti Alesana served as prime minister from 1985-1989, he sparked controversy due to his censorship of government critics. Subsequently in 1990, through a referendum, universal suffrage was introduced and in 1997 legislature was passed to change the name of the state from Western Samoa to Samoa.

1899 Germany annexes Western Samoa (now called Samoa), the US takes over eastern Samoa (American Samoa) and Britain withdraws its claim due to treaty between Germany, Britain and the US

2013  Constitution amended in June to create a parliamentary quota system designed to ensure that after the next election, women will hold at least 10% of seats in the 49-seat parliament or Fono

The government of Samoa is a parliamentary republic and includes a mixture of the elements of Samoan and New Zealander traditions. The Head of State, elected by the Legislative Assembly for a five-year term, has the power to appoint the Prime Minister to serve as head of the government. The Human Rights Protection Party has been the ruling party of Samoa for most of the time throughout Samoa’s independent history.

It is estimated that agriculture contributes around 10% of Samoa’s GDP and accounts for around 65% of the workforce. There are three main categories of agriculture in Samoa are subsistence farming; semi-commercial farming; and commercial farming. Local farmers mostly engage in subsistence farming, with the surplus sold for cash. Common crops in Samoa include coconuts, bananas, taro, coffee, cocoa and mangoes. For livestock, cattle, pigs and poultry are often raised and consumed locally.

As estimated in 2017, the GDP of the industrial sector accounts for around 23% of Samoa’s total GDP.  The light manufacturing industry in Samoa is not only growing but also diversified. Common light manufactures include beer, cigarettes, coconut oils, corned beef, soap, paint and handicrafts. Samoa’s manufacturing industry attracts a lot of foreign investment. For instance, the Japanese-owned Yazaki EDS, Samoa is a large manufacturer and is one of the leading employers in Samoa; Samoa Breweries, a brewer dominating the Samoan beer market, was taken over by an Australian firm.

The tourism industry serves as the foundation of Samoa’s service sector, which is estimated to account for 66% of Samoa’s GDP but only around 7% of the workforce. Samoa is an increasingly popular travel destination for people living in American Samoa, New Zealand, Australia, the United States and Europe.  Samoa is known for its warm culture and genuine hospitality as well as its natural beauty; white-sand beaches, mountains, waterfalls, and black rock lava fields.

Samoa is a member of the South Pacific Regional Trade and Economic Cooperation Agreement (SPARTECA) and the Pacific Island Countries Trade Agreement (PICTA).

Samoa is a safe and stable democratic country and is one of the easiest Pacific states to do business within. With competitive wage rates, developed infrastructure and accessible amenities.

According to the Samoan Prime Minister, Fiame Naomi Mata’afa, Samoa is looking for investments in the financial sector especially as Australian banks have begun to move out of the region. The Samoan government is particularly interested in investments in the tourism sector which they wish to prioritise once the COVID-19 pandemic subsides and travel restrictions are lifted. Aside from these two sectors, the Samoan government is keener on improving and diversifying both trade sources for imports as well as destinations for exports.