Spread across eastern New Guinea, stretching from the south of the Equator to the Torres Straits and bordering the northernmost territory of Australia, the Cape York Peninsula, Papua New Guinea is an island country in the southwestern Pacific Ocean. Papua New Guinea also encompasses the Bismarck Archipelago, New Ireland, the Admiralty Islands, Bougainville and Buka along with several more small islands and atolls. The capital, Port Moresby, is located in the southeast of the islands along the Coral Sea. The islands of the state have an iconic fingerlike shaped indentation on the southern coast of the western border that points towards the D’Entrecasteaux Islands and the Louisiade Archipelago. The beautiful and surreal Mesozoic geological history and recent collisions with the northbound Australian Plate lend to the state’s varying terrains of low plains, such as the Fly-Digul shelf, in the south and belts of limestone, karst, dolines and jagged protruding rocks towards the north that is blanketed by low-lying rainforests. Across the west and the southeast are the looming Highlands with mountains reaching heights above 13,000 feet. 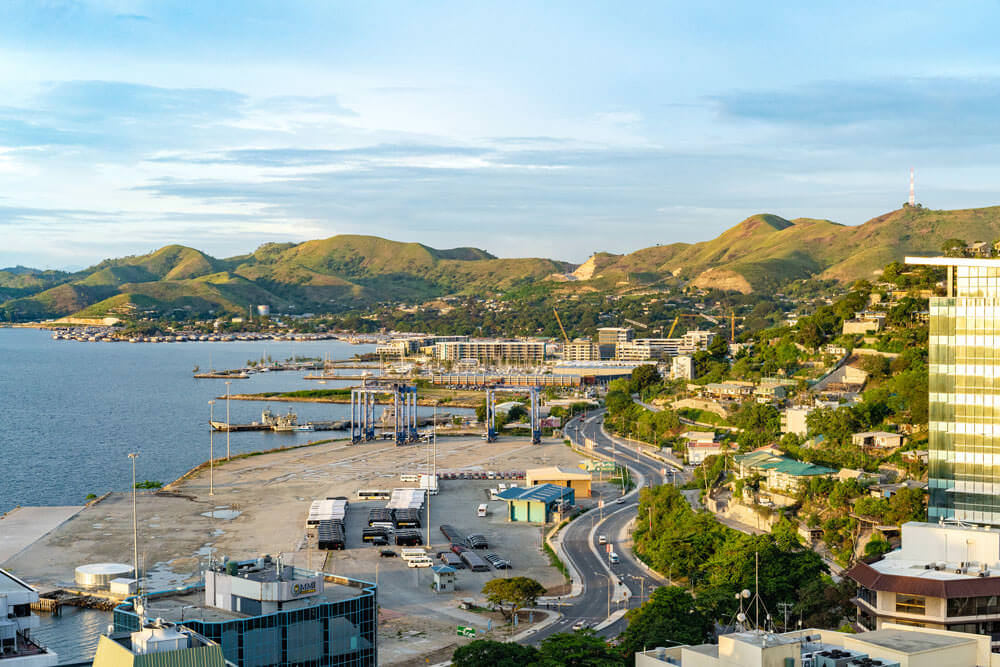 The country has one of the most heterogeneous populations in the world, with over a thousand different ethnic groups residing across the islands although most are of Melanesian origin. Small populations of Micronesian and Polynesian citizens live on the atolls, and a small expatriate community, notably Australian, Filipino, and Chinese, live in the more central areas. Due to the large variety of ethnicities, an estimated 839 languages are spoken across the territories of Papua New Guinea of which three are its official languages; Tok Pisin, the lingua franca of the state; English, spoken by 1-2% of the population, and Hiri Motu spoken by approximately 2%. In regards to religion, 64% of Papua New Guineans are Protestant Christians, 26% are Roman Catholic, and 5.3% are other non-specified Christian with the remaining population following other religions including Buddhists, Hindus, Muslims and others.

Current evidence reveals evidence of Polynesian activity predominantly in the Bismarck Archipelago, dating back 50,000 years back when taro was the main staple of the land instead of sweet potato that only began to be produced approximately 300-400 years ago.

Chinese and Malay traders are some of the first known to travel to western New Guinea several hundred years ago to take spoils and slaves for hundreds of years before the first known European traveller, assumed to be the Portuguese explorer Jorge de Menses, in 1526-1527. The first attempt at colonisation was back in 1793 by British naval officer Lieut. John Hayes near Manokwari (present-day Papua province of Indonesia) however it was the Dutch who were successful in taking over the western half of Papua New Guinea’s territories, which were then dubbed the Dutch East Indies. The Dutch kept hold of the land from 1828-1898 during which the German New Guinea Company gained hold of the northeastern region, and the British protectorate consisted of the southeastern quadrant up until 1906 after which the land was administered by Australia; out of all the regions, the German-controlled region generated the most economic activity. After the end of World War 1, Australians was given the mandate over the German-occupied New Guinea by the League of Nations in 1921, excluding the Papua territory in the south. The discovery of large gold deposits in eastern New Guinea in the 1920s led to an economic boom of sorts in the area, and in 1930 a previously-unknown large population of indigenous people were found dwelling in the Highlands basins.

During World War II, the Japanese successfully invaded northern New Guinea, taking over the headquarters at Rabaul on the island of New Britain, in 1942. Although they were defeated in the Battle of Milne Bay by September of 1942 they diverged along the Kokoda Trail and almost overtook the Papuan headquarters at Port Moresby, but were eventually pushed back by Australian troops and after several heavy losses incurred on both sides during the war on Bougainville Island and the New Guinea mainland, the Japanese surrendered in 1945. In the aftermath, there was a polarised argument between those that wanted to re-establish the Australian order and those that wanted to give self-governance to the local population who sacrificed so much amidst the World Wars. In conclusion in 1946, the United Nations gave the mandate of eastern New Guinea to Australia which the latter incorporated into a combined territory with its administrative region of Papua, eventually coining the name as the Territory of Papua and New Guinea, which gave way to the name the country holds today. Demands for self-governance were acknowledged and international pressure was put on Australia in the 1960s to accelerate efforts towards decolonisation. General elections were held for the House of Assembly in 1964, 1968, and 1972 which ultimately led to the official day of independence on 16 September 1975. Former chief minister during the Australian administration, Michael Somare, became the first Prime Minister of Papua New Guinea in coalition with other smaller political parties allying with his party, the Papua and Niugini Union (Pangu) Party. He implemented a provincial style administration and remained in office until he received a vote of no confidence in 1985, subsequently defeated by Paias Wingti, founder and leader of the People’s Democratic Movement (PDM) and Somare’s former deputy prime minister.

2 years prior to independence, separatist sentiments were rising in the southern region of Papua and the Bougainville district but due to a lack of cohesive mobilisation and support for the government by the local elites and intellectuals these separatist movements lost momentum, except in the case of Bougainville. They briefly created a separate state called the Republic of North Solomons on 1 September 1975, but eventually rejoined Papua New Guinea in 1976.

1906 British New Guinea transferred to the Commonwealth of Australia, which dubs the land as the ‘Territory of Papua’

1921 League of Nations grants Australia a mandate over German New Guinea, to be governed separately from the Territory of Papua.

1963 UN transfers control of West New Guinea to Indonesia in May.

1975 New currency, the kina, replaces the Australian dollar in April 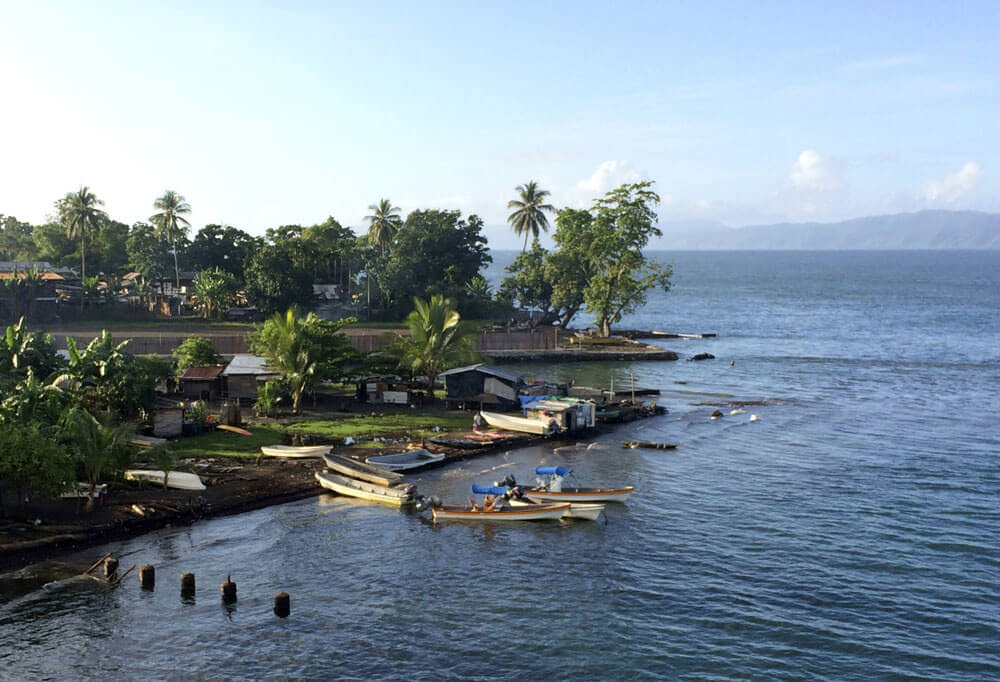 Papua New Guinea is a constitutional monarchy with HM Queen Elizabeth II as the Head of State. She is represented by a Governor-General who is directly elected by the members of the National Parliament and is appointed for mostly ceremonial purposes aside from selecting the Prime Minister based on the proposals of the Parliament. The Prime Minister in turn recommends appointments for the Cabinet which is also known as the National Executive Council.

The country has three separate tiers of government; at the national level, the National Parliament is a unicameral legislature of 111 members who are elected for 5-year terms based on universal suffrage from 89 single-member electorates and 22 regional electorates. At the provincial level, these regional electorates represent all 20 provinces, as well as the Autonomous Region of Bougainville and the National Capital District and these members, also serve as provincial governors. Overall there are 296 local-level governments (LLGs) consisting of 31 urban LLGs and 265 rural LLGs.

Papua New Guinea has a mixed legal system consisting of both common and customary law as stipulated by section 3 (1) of the Underlying Law Act 2000. Aside from these, the state also follows the ‘Written Law’ as stipulated by Section 9 of the Consitution and Organic Laws stipulated under Section 12; these laws are ‘supreme laws’ that trump other ‘underlying laws’. Local and District courts deal with minor offences, and whilst the National Court and Supreme Court have original jurisdiction, they also serve as courts of appeal. There are also subordinate specialised courts, which deal with matters such as land disputes, and infractions committed by minors.

Papua New Guinea’s principal source of revenue comes from its established agriculture industry, which employs over 67 per cent of the country’s workforce and accounted for over one-quarter of GDP in 2019. The Productive Partnership in Agriculture Project has assisted over 65,000 small-scale farmers whose main harvests include production of cocoa and coffee beans, replanting trees and rehabilitating farmland. The government had also planned to launch a US$40 million project by mid-2020; however, this has been put on hold since the COVID-19 pandemic hit.

Papua New Guinea’s second-largest sector, and perhaps the most profitable, is the mining and extraction industry, which contributed 29 per cent to GDP in 2018. In May 2014, an oil consortium invested US$19 billion in Papua New Guinea to establish a liquefied natural gas project. This project has sparked interest in other foreign investors who have helped the industry to grow.

Papua New Guinea has large reserves of minerals and natural gas from which the country derives a good amount of its revenue; however, in efforts to make energy sources more environmentally sustainable and unpredictable fluctuations in the energy siphoned tends to adversely affect the economy. As such, the government is looking for investment into the up-gradation of the mining and energy sectors to enhance its economy. Furthermore, the state produces a variety of valuable commodities such as coffee, coconuts, palm oil, and wood products that require investments for mechanisation, refrigeration and overall improvement of production infrastructure for which joint ventures are a lucrative opportunity for foreign investors. Papua New Guinea has significant reserves of freshwater that may be processed for the country’s drinking water supply as well as for the generation of hydroelectric power; such investments would alleviate water crises faced by rural populations as well as energy outages and fluctuations across the provinces. The government also wishes to improve the water supplies for tourism, resorts, fishing facilities and water sports purposes that could help diversify the economy. Other lucrative areas of investment also include telecommunication services, mining, processed foods and beverages, and the digital economy.

Papua New Guinea offers export income incentives for firms that produce or invest in specified manufactured products, double deduction of tax on income for export market development, wage subsidies, and pioneer industries schemes that provide five year tax holidays for new industries associated with the development of the manufacturing sectors, among other incentives for capital investments and rural area development.