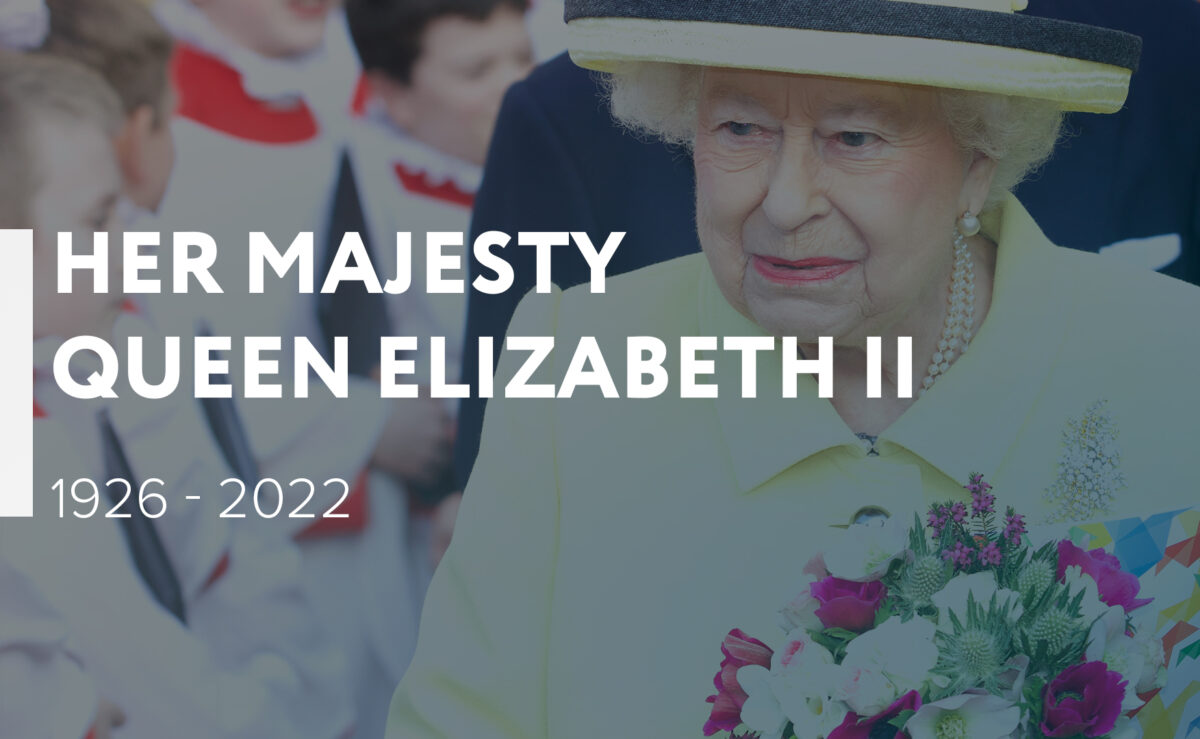 “I declare before you all that my whole life, whether it be long or short, will be devoted to your service”.

A declaration by Her Majesty which without a doubt came true!

On 8 September 2022, Her Majesty The Queen, Queen Elizabeth II peacefully passed away at Balmoral Castle in Scotland.

71 of Her Majesty’s 96 years were dedicated to her nation and to the Commonwealth. But even prior to her Majesty’s coronation in 1951, when she was known as Princess Elizabeth, Her Majesty was a symbol of unity and hope. Princess Elizabeth’s first ever address to her country and the Commonwealth was broadcast on 13 October 1940; it was recorded for the BBC’s Children’s Hour programme when she, along with her sister Princess Margaret, recorded a message in support of all the children who had been displaced or affected by the Second World War. Her Majesty’s final public address during Christmas 2021 echoed a similar sentiment, this time expressing sympathy and support for those affected by the coronavirus pandemic that had been sweeping the world since 2019. Her Majesty matched her words with her actions; her first official trip overseas was to South Africa and since then she had been on over 200 trips to Commonwealth nations, several of which she visited multiple times. Her Majesty’s last trip abroad was to the Commonwealth nation of Malta for the 2015 Commonwealth Heads of Government Meeting (CHOGM). Her Majesty made it a point to be a physical tether among the nations of the Commonwealth, stating in 1953 during her Christmas broadcast in Auckland, New Zealand: “I want to show that the Crown is not merely an abstract symbol of unity, but a personal and living bond between you and me”.

“To that new conception of an equal partnership of nations and races I shall give myself, heart and soul, every day of my life.”

Her Majesty Queen Elizabeth II reigned during a time when many Commonwealth nations were in flux, and she wholeheartedly embraced their journeys and urged the nations to build new relations atop historical ties. These sentiments were expressed in 1971 when during CHOGM in Singapore, the Commonwealth restated its commitment to “promoting international peace, fighting racism, opposing colonial domination, and reducing inequities in wealth” and these principles were then later included in the formal charter of the Commonwealth in 2012. Her Majesty’s insistence of attending all CHOGMs and Commonwealth Summits apart from the few she could not due to her health were, as researcher Philip Loft wrote,  a major personal encouragement that maintained her influence and nurturing presence that has kept the organisation together as Her Majesty made it a point to make sure every nation knew it mattered to the Commonwealth.

During her lifetime, she had to tackle many controversial political challenges, ranging from the removal of South Africa, Pakistan, Nigeria, and Fiji for human rights violations (they were all accepted back into the Commonwealth based upon later assurances) to the international Suez Canal crisis. It was a rare instance where she allowed her own opinions to become known when she supported sanctions against the South African Apartheid regime at a time when the British government did not. Instead of letting such challenges break apart the Commonwealth, she maintained her commitment to keeping the family of nations united and even attended potentially risky events, including the Lusaka Summit in 1979, to ensure her non-attendance was not manipulated or misconstrued.

Most poignant to many of all her services to the Commonwealth, was her heartfelt dedication to the betterment of those individuals most in need. During her Majesty’s reign, she was involved with more than 600 non-profits that in total amassed over US$2 billion. Aside from charities, Her Majesty also oversaw many new initiatives created in her honour for the betterment of Commonwealth societies including the Queen’s Green Canopy, the Queen’s Awards for Enterprise, the Queen’s Award for Forestry and the Queen Elizabeth Commonwealth Scholarships to name but just a few. Her Majesty’s patronage of non-profits for medical and scientific research was well-known and she was an avid follower of technology, having been amongst the first to ever send out emails in the 1970s, way before the rest of the world caught on. She also recorded a goodwill message to be left on the moon by the astronauts of Apollo 11— her altruism reached the stratosphere.

Her Majesty the Queen, Queen Elizabeth II was no ordinary monarch. Embarking on a lifelong journey at the tender age of 25 with so much responsibility thrust upon her shoulders, she carried it all with grace and dignity. Even when serving in the Auxiliary Territorial Force during the World War, Her Majesty confounded sceptics with grace and humility, as she would later do in her role as a leader, a wife and a mother.

Prince Philip even affectionately called her the “psychotherapist” of the Commonwealth due to her intimate knowledge of each and every Commonwealth nation and served generations of their leaders. For many she was a steadfast supportive figure who always led by example.

While she may have been the UK’s longest-reigning monarch, even this time spent with her seems short. May we always remember Her Majesty and her service to the Commonwealth in the years to come.