Official language: English and Manx Gaelic (about 2% has some knowledge)

The Isle of Man, also known as Ellan Vannin in Manx-Gaelic, is a self-governing Crown dependency located approximately equidistant between the northwestern coast of England and the northeastern coast of Ireland in the Irish Sea. The island is one of the smallest territories in Europe and is said to be a geographical miniature of Britain with a total land area of 572 sqkm. It is about 48 km long and 16 km wide and its main axis is from southwest to northeast. The capital of the island territory is Douglas which houses the largest concentration of citizens across the land.

One of the most prominent features of the island is Snaefell, the highest mountain and singular summit of the Isle of Man, standing tall at a height of 2,036 feet surrounded by mountain mass all around in the central-eastern region of the territory. The mountain mass lowers into oblique stretches of hills and well-defined rolling valleys of low-lying agricultural lands. The flat northern plains, consisting of glacial tills and ocean sediments, extend into long sandy beaches which contrast starkly with the rocky cliffs and sheltered bays that encompass the 160 km long coastline. To the southwest is the islet called “the Calf of Man” which is a bird sanctuary overseen by the Manx National Heritage. Except in a few sheltered locations,  the Isle of Man is mostly treeless with over two-thirds of the land mass cultivated. 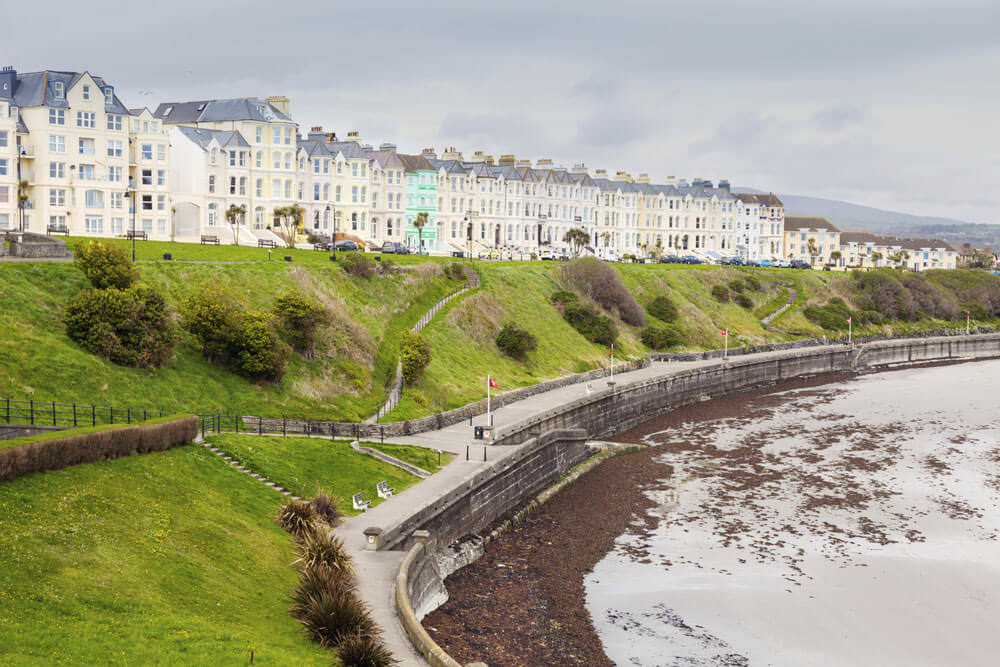 According to 2021 governmental estimates, the resident population of the Isle of Man was 84,069. The population is predominantly (94.7%) White (Manx, British, Irish, Irish Traveller and others), 3.1% are Asian, Asian Manx and Asian British, 1.0% are of mixed or multiple ethnicities and 0.6% are Black, Black Manx and Black British. English and Manx Gaelic are the official languages of the Isle, though the former is the lingua franca and the latter is spoken by an approximate 2% of the population. 2021 surveys show that Christianity is the majority religion practised by 54.7% of the population. 0.5% practice Islam, another 0.5% practice Buddhism, 0.4% practise Hinduism, and 0.2% practice Judaism whilst the remaining 43.8% of the population does not practise any religion.

The Isle of Man has an ageing population; 27.3% of residents are below the age of 25 which is lower than the 34.9% that are aged 55 and above. 53.3% of inhabitants live in urban cities and large towns.

The island mass of the territory was formed 85,000 years ago when the melting of glaciers rose the sea levels that cut off Mesolithic Britain from the European mainland. As the ice-age receded, human occupation gradually began on the island mass some 10,000 years ago. The first settlers are said to have been Celtic tribes which were likely immigrants from Ireland based on the resemblance of the Manx Gaelic language to Irish Gaelic.  Even the island’s name is derived from the legend of the Celtic sea god Manannán and Christianity was introduced and spread throughout the island by the Irish missionary, St Maughold who is veenerated as the patron saint of the Isle of Man.

Scandinavians first arrived to the Isle between AD 800 and 815; initially to ransack the territory looking for valuables and riches. By 850 AD they began to settle and made the island a strategical staging post to connect the Viking outposts in the Scottish Western Isles, Dublin and northwestern England. They ultimately decided to integrate the Isle of Man under the rusle of the Scandinavian Kings of Dublin and in AD 979 the King Amlaíb (Óláfr) Cuarán  established a self-governing parliament in the island, known as the legislature of Tynwald the ceremony of which is celebrated on the 5th of July annually even today.

The Isle of Man was a disputed territory between Norway and Scotland ever since the Norse kingdom took over administration of the island in 800 AD. Eventually, the Treaty of Perth was signed in 1266 which ceased the conflict between Norway and Scotland wherein the former acknowledged the sovereignty of the latter for a sum payment of 4,000 marks and annuity of 100 marks. The first claim on the Isle of Man by England is said to have taken place in 1290 when the Hammer of the Scots, King Edward I, took over rule of the land. In the subsequent several decades jurisdiction over the island swapped hands multiple times between the Scottish and the English but eventually the latter succeeded complete control in 1341. In 1406 the English crown handed over the island to Sir John Stanley who ruled the island with his family until 1736. Interestingly, the Stanley’s refused to be called royal titles and instead adopted the title “lord of Man,” instead which still holds to this day. The lordship of Man passed to the Dukes of Atholl in 1736.

Throughout the 15th and 16th centuries, the Isle of Man became a notorious centre for contraband trade due to which the government of Westminster passed the Smuggling Act of 1765. During the same year, the British Parliament purchased the island and acquired the Atholl family’s remaining control on the island by 1828. The Three Legs of Man was made the flag of the Island as a symbol of independence and its meaning is inscribed in the saying Quocunque Jeceris Stabit  meaning ‘Whichever way you throw me I stand’. 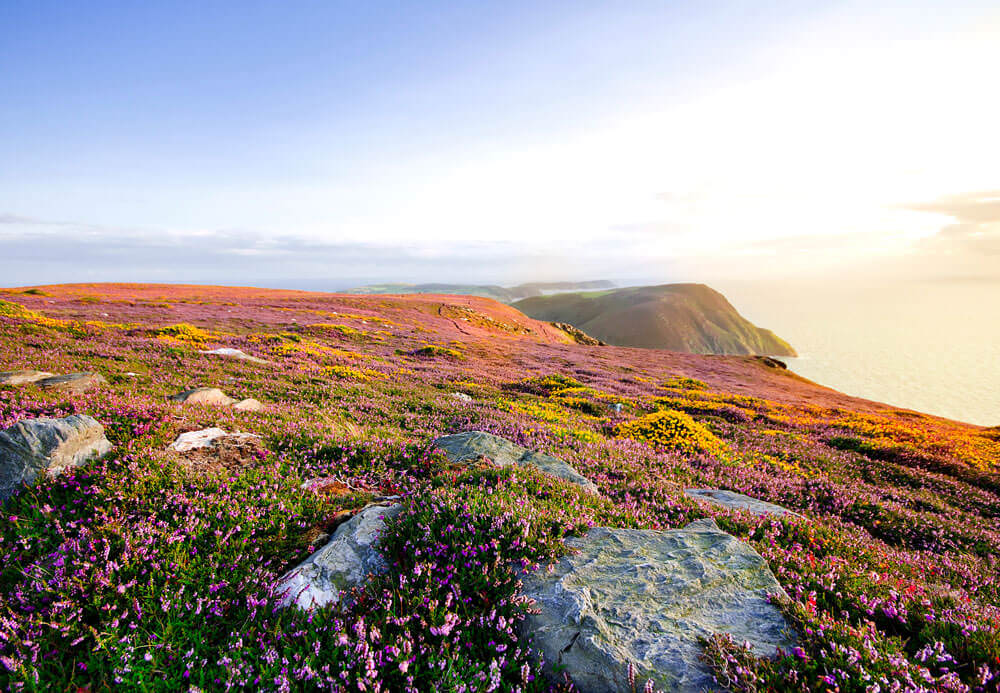 The Isle of Man is a constitutional monarchy governed through a parliamentary system. The Chief of State, or Lord of Mann, is Queen Elizabeth II who is represented by the formal head of the Government and Lieutenant Governor who acts as the personal representative of the Queen. The executive head of government is the Cheif Minister. The Lieutenant Governor is appointed by the Queen and the former in turn selects the Council of Ministers that will make up the Cabinet. The Cheif Minister is elected via the Tynwald parliament for a term of 5 years. The bicameral Tynwald, or High Court of Tynwald, is the executive section of the Legislative branch consisting of the Legislative council that includes 11 seats for a term of 4 years as well as the House of Keys which consists of 24 seats for a term of 5 years. 8 members of the Legislative Council are indirectly elected by the House of Keys.

Though a Crown dependency, the Isle of Man has a completely separate jurisdiction. The Island abides by the principles of the Manx legal system which is based on the English common law, and also adheres to the precedents set by the English Courts as well as Courts of other Commonwealth nations for cases where a Manx precendent is not already established. The Manx law originates from the Acts of Tynwald and has developed over time to fit the niche needs of the Isle of Man’s unique circumstances, particularly in the matters of tax, company law and financial supervision.

Criminal and civilian matters of the island are handles by the Island’s High Courts, the judges of which are called “Deemsters” which is a term used since the Viking Age. The first Deemster is the head of the Judiciary. The Isle of Man has Magistrates which play the role of their English counterparts and the local Court of Appeal is known as the Staff of the Government Division though the final Court of Appeal is the Judicial Committee of the Privy Council who sit in London. As of January 2015, Channel Islands’ and Isle of Man judges are eligible to sit as Appeal Judges for each other’s jurisdictions.

Financial services, manufacturing, and tourism are key elements of the Isle of Man’s economy. Of these sectors, manufacturing provides a predominant portion of employment fo the citizens of the Island and is second only to finance in terms of income. The presence of financial, professional, and business services contributed to the development of high-end industries in the Isle of Man (e.g., advanced engineering and ICT).

The Government offers low taxes and other incentives to high-tech companies and financial institutions to locate on the island. This has paid off in creating employment opportunities in high-income industries. As a result, agriculture, and fishing, once the main drivers of the economy, have declined in their contributions to GDP though the Island still produces oats, wheat, barley, turnips and potatoes and cattle farming and sheep grazing for domestic production is prevalent on the pastures of the central region. The film industry and online gaming also contribute a sizeable portion to the economy, having comprised 10% of the territory’s income in 2014.

The Isle of Man provides companies income tax exemption for up to five years on profits from new commercial developments or improvements upon pre-existing commercial developments as well as rental income received on these commercial developments. The government of the Isle of Man also endeavours to retain foreign talent to settle and work in the territory; for individuals who are or plan to be new residents and are crucial to the functioning of a business on the Island will be offered, based on certain conditions, to be given non-resident tax exemptions on their income for the first three years under this Key Employees scheme. The nation’s relatively low tax rate and absence of capital taxes provides investors more disposable income to invest into stocks and shares.