An Ode to Mussels 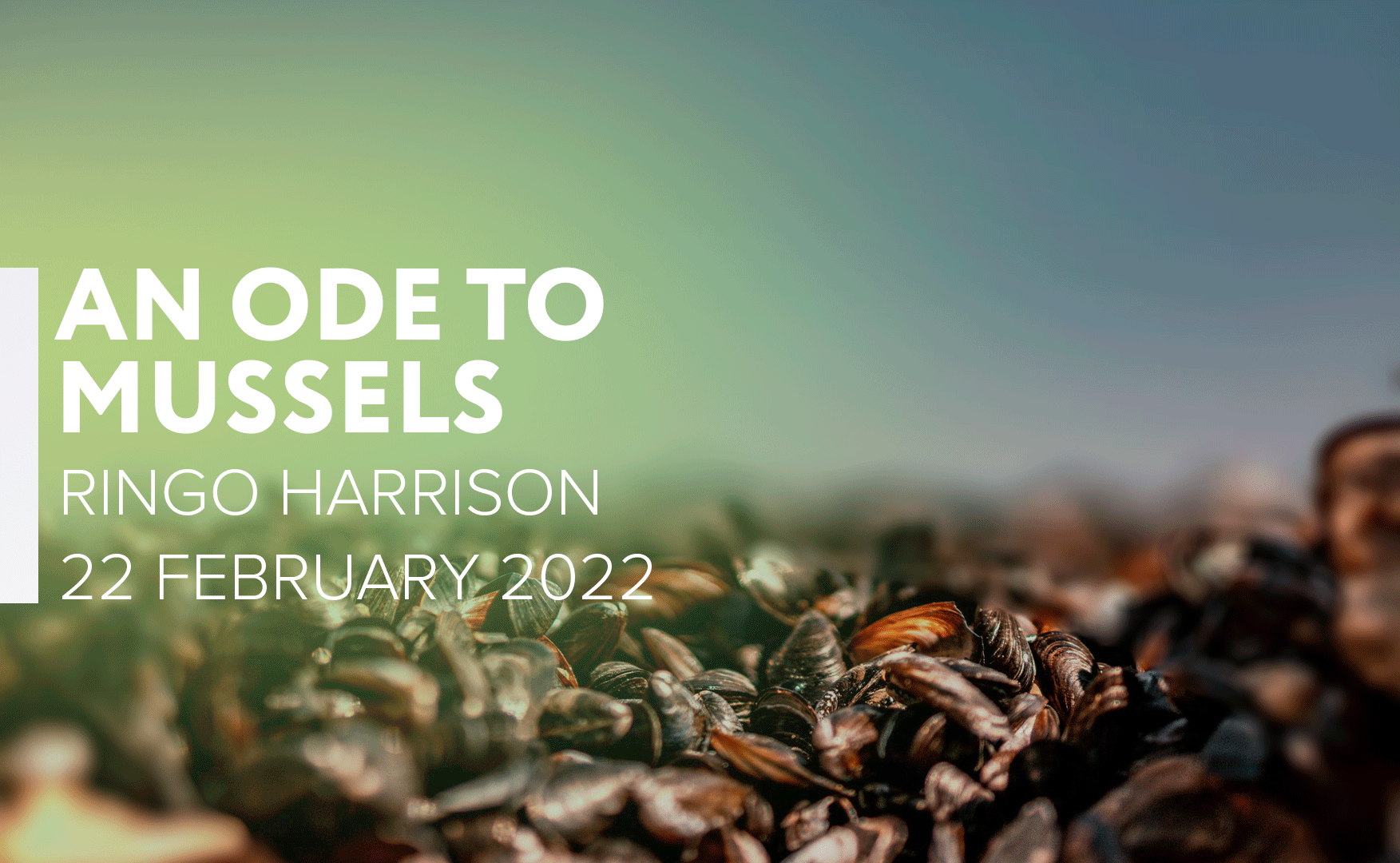 A Brief Introduction to the Wonders of Mussels

In June of 2020, the World Economic Forum held their 50th annual meeting amidst the early days of the coronavirus pandemic. Normally the World Economic Forum focused on improving market efficiencies, business innovations, and global trade, but this meeting was particularly different. Rather than focusing simply on improvement, the tone was obviously different this time around with an emphasis on transformation rather than improvement as noted with the most famous quote, “The Great Reset” which gave this particular meeting an unusual amount of attention not usually seen. Oddly enough, there was one small aspect of the World Economic Forum that has been garnering attention which was their proposal of eating insects as a sustainable source of protein.

Headlines both informative and shocking appeared such as “Giving insects the role they deserve in our food system”[1] to “Maggots on the menu.”[2] In an environmentally troubled and food insecure world, insects are not just amazing at solving hunger and malnutrition, but they use significantly less land, water, and produce fewer greenhouse gasses than livestock[3]. Through the lens of sustainable policy, there is a strong incentive to reduce the consumption of livestock and find meat alternatives and politicians and business leaders around the globe have started doing just that. From Meatless Mondays, to plant based lab grown meat, to public campaigns by politicians to promote the consumption of insects.

As well intended as these campaigns are, they reek of culinary puritanical flagellation, Fear Factor adventurism, and dreadful memories of mom and dad forcing us to eat broccoli “For our own good” and the results from a policy perspective and our own personal lives should speak for themselves. Other than trying to convince individuals to consume less meat, efforts to reduce meat consumption for epidemiological or environmental reasons will be unlikely to work. In addition, growing plants or raising insects as an alternative to meat is just going to stress our already limited arable land.

Instead, consumers should start looking away from using the land for agriculture and look to the sea. Many critics will point out ocean exploitation by pointing out the issue of overfishing and peak fish as well as aquaculture, specifically salmon, carp, and shrimp farming which is plagued with pollution, diseases, and even human rights violations. However, there is another protein which gets past the issues of agriculture, taste, and most of all, the disgust factor. The humble mussel.

The mussel is a “superfood” in every way. It is nutritious, low calorie, and environmentally sustainable. In a world of anxiety about our waistlines and our environment, it is rather surprising mussels are not given the same kind of attention as the Impossible Burger or Meatless Monday.

To produce one pound of beef, it requires approximately 6.7 pounds of feed. For pork, 3 pounds of feed, and for chickens, ¼ of a pound of feed for 1 pound. The water footprint of meat from beef cattle is (15400 litre/kg for sheep (10400 litre/kg), pig (6000 litre/kg), goat (5500 litre/kg) and chicken (4300 litre/kg)[4]. These numbers are quite concerning and apocalyptic to others and it doesn’t take factors such as land destruction to produce feed or water and land degradation from animal waste.

Salmon is seen as a more sustainable alternative with 1.15 kilo of feed for 1 pound of salmon[5], nearly a 1 to 1 ratio but farmed salmon feed is made from other fish[6] which requires more fish to be harvested from the ocean. Another downside to salmon is that it requires good quality water to thrive, but farming salmon pollutes the surrounding waters. In addition, salmon is prone to diseases and headlines of farmed salmon dying in the millions is not uncommon[7].

Mussels are the perfect alternative. Firstly, mussels do not require land at all, it is all farmed in the sea. Secondly, mussels do not require lots of space in the ocean. Fish farms require a significant amount of space to operate. Mussels on the other hand thrive in cramped conditions and raised on massive ropes. And while land animals and fish require massive amounts of feed to be grown, mussels only require plankton.

With all these sustainability factors in mind, there should be every incentive to promote mussels as a staple protein. Unfortunately, similar to insects and soy meat, just because the data shows that eating certain foods is good for personal health and environmental security does not mean consumers will line up to eat these foods.

How to get Consumers to Eat Mussels?

From a consumer perspective, it should be quite evident that the mussel is a superfood that can be easily turned into a staple food. In addition, this superfood is significantly more affordable than the superfoods often advertised such as berries and avocados. However, as self-evident as the mussels may be as a cheap superfood, the cruel reality is that demand for the mussels remains quite low. The biggest market for mussel consumption per capita is Belgium but the biggest consumers for mussels are in France, Spain, and Italy which only exists because of its culinary history.

Outside of Europe, the demand for mussels is low. In the US, 54% of Americans report eating shellfish in the last 30 days[12] and while there is little data on mussel consumption, it can be assumed that the overwhelming majority of consumption is shrimp. A similar story is seen in Canada as well as New Zealand and Australia[13] with most consumers favoring fin fish and shrimp when they do choose to consume shellfish. Despite the low consumption of mussels in the Anglosphere, it is quite surprising to see that New Zealand and Canada are the biggest producers of mussels in the British Commonwealth with most of the Canadian exports going to America and the New Zealand mussel exports going to America and Thailand.[14]

I am optimistic that strong marketing efforts and imagination could create a domestic market in the Anglo Commonwealth. Marketing methods that could be used to increase the popularity of mussels could be as listed.

There has been a lot of marketing of mussels as a sustainable source of protein. Throughout this research however, the channels and articles promoting this were not very successful in their outreach. One possible reason could be the huge emphasis on sustainable eating being centered around reducing consumption of meat and seafood rather than different sources of meat and seafood. This method seems to only give the moral foundation for conscientious consumers but not a culinary skill to incorporate into their lifestyle.

As celebrity chef Andrew Zimmern has stated, social media dominates all trends in the culinary world. In this instance, focusing on the convenience of an easy and cheap source of protein would be preferable over a complicated and visually pleasing dish. An example of a simple dish is the baked feta pasta[15] from TikTok that went viral first in Finland and then throughout the world. This was such a phenomenon in Finland that it caused a shortage of feta cheese in Finland. As a personal anecdote of how far reaching this viral video was, my mom shared this recipe with me and she doesn’t even use TikTok.

Mussels have a similar potential for convenience cooking. It takes approximately 4-6 minutes to cook mussels, which is approximately the same time it takes to prepare instant noodles. In addition, mussels are a one pot dish and have a fridge life of about 5 days. With creative marketing on social media, mussels have the potential to become a staple convenience food.

Cooking channels are an excellent place to promote mussels. Unfortunately, mussels are often promoted as a niche item on many cooking channels but there is potential for a channel to promote the mussel as a staple dish through a variety of recipes. To encourage creators to make mussels would have to happen through sponsorships.

This method by far has the most potential. Whenever major celebrities or influencers endorse anything, the market moves with them. Businesses, careers, and restaurants have been built off of recognition from influential people alone.

An example of this in the culinary world is the fried chicken craze caused by the popular K-Drama My Love from the Star where the protagonist played by Jun Ji-hyun had a love of fried chicken and drank beer. This caused a massive increase in consumption and sales of fried chicken and beer in China, despite falling sales due to fear and uncertainty caused by H1N1. If a celebrity or influencer were to display their love of mussels or if a popular drama portrayed A-list stars eating mussels, this could easily change culinary culture.

However, it may be a long time until mussels become more popular. In the meantime however, anyone who wants to eat more ethically while minimizing their time spent in the kitchen while remaining health conscious can try these two incredibly easy recipes. If mussels are not available, clams are the perfect substitute in terms of health benefits and environmental sustainability.

[12] Intake of Seafood in the US Varies by Age, Income, and Education Level but Not by Race-Ethnicity (nih.gov)