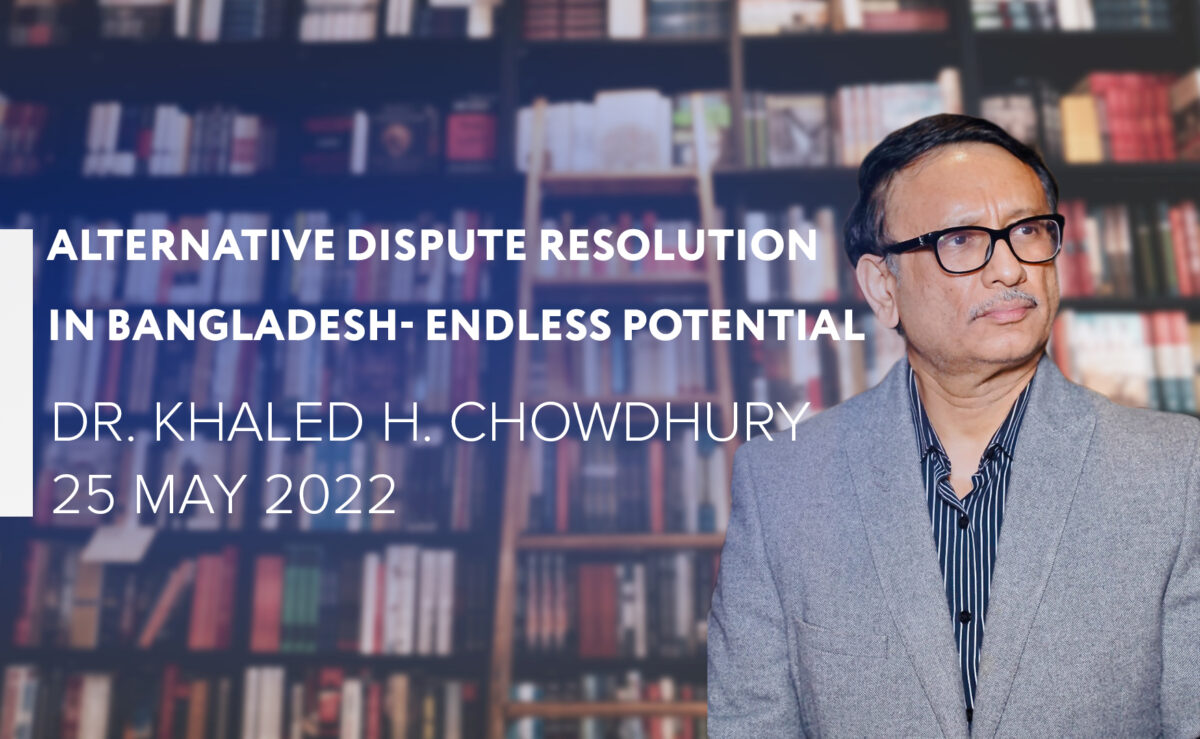 Having been called to the Bar of England and Wales in 1995, by the Hon’ble Society of Lincoln’s Inn in London, Dr Chowdhury qualified as an Advocate of Bangladesh Bar Council and eventually secured his enrolment as an Advocate of the Supreme Court of Bangladesh in 1996. Dr Chowdhury has a great deal of experience in handling all civil, commercial, and criminal matters as well as arbitration, mediation and consumer disputes whilst currently pursuing his specialisation in Construction Law. Dr Chowdhury is also a CEDR (Centre for Effective Dispute Resolution) accredited Mediator since July 2014, a Panel Member of BIAC (Bangladesh International Arbitration Centre) as an accredited Mediator since 2014 and the Empanelled Arbitrator and Mediator of AIAC (Asian International Arbitration Centre) since December 2016. He is one of the few distinguished Fellows of CIArb (The Chartered Institute of Arbitrators) in Bangladesh since March 2017 and also completed the Certificate Programme in Sports Arbitration at AIAC in September 2016. He has also completed the training programme to be an Adjudicator in the field of Construction Law in Malaysia.

As an added benefit with respect to Dr. Chowdhury’s association with the legal field in Bangladesh, he has vast teaching experience in law. Dr. Chowdhury is acting as the owner of London College of Legal Studies (South), a premiere English Law institute in collaboration with 25 UK Law Schools. He has taught at Dhaka University as an adjunct professor for 13 years, at Victoria University Melbourne’s Dhaka Centre for 8 years and also at the Royal Road University Canada’s Dhaka Study Centre amongst others. He also works as an adjunct professor in different private universities including Eastern University and University of Liberal Arts Bangladesh. He leads the ADR sessions at the Law Clinic of Dhaka University and has also conducted sessions on ADR, Procurement Laws at BIAC.

In this interview with our correspondent Arafat Reza, he discusses the future of Alternative Dispute Resolution (ADR) in Bangladesh, factors impeding its growth, and the role that the Commonwealth can play in promoting it as an effective method of dispute resolution in Bangladesh.

Q. How would you define ADR? What are the various forms of ADR? How is ADR different from the way traditional courts work?

A. The perception of alternative dispute resolution (ADR) stems from the fact that the traditional avenues of dispute resolution has failed to meet the needs for which it was developed for a variety of reasons, including an increasing population, which has resulted in a rapid increase in the number of disputes.

Traditional methods failed to meet the expectations of the public at large, such as resolving their dispute within a reasonable time and cost. As a result of this failure, ADR has gained prominence not only around the world, but also in our country.

ADR refers to the various methods for resolving disputes outside of the courts with the help of a third party. There are numerous types of ADR in use today around the world. Mediation, arbitration, conciliation, settlement conferences, neutral evaluation, and negotiation are some popular forms, amongst others.

ADR mainly differs from courts in that it is party driven, which means that parties have more control over how things work. For instance, let’s say a dispute has arisen between two parties who work in the construction industry.

They want their dispute to be resolved by someone who has in-depth knowledge about the industry. They cannot choose who the judge will be if they take their dispute to court, but they can choose a neutral third party with such expertise in ADR.

Q. How did ADR find its way to Bangladesh? What forms of ADR are most commonly used in your country?

A. ADR has been practiced for decades in the Indian subcontinent. However, the legislative origins of mediation in Bangladesh can be traced back to the Family Courts Ordinance of 1985, where mediation was mentioned for family disputes. That became very successful. The contribution of former Chief Justice Mustafa Kamal in this regard is extraordinary. He established pilot courts for the resolution of family cases through mediation, which became so successful that our Civil Procedure Code was amended in 2003 to include ADR in civil cases.

The Arbitration Act 1940 provided legislative validation for arbitration. It became obsolete over time, and there were issues such as a lack of scope to enforce foreign arbitration awards. The Salish Ain 2001, a legal aid organisation, was incorporated to address these shortcomings. Aside from these, there are now a plethora of laws that include various forms of ADR.

If I were to go into greater detail about which types of ADR have become more popular in Bangladesh, it would be extremely difficult for me to give an answer because extensive research on this subject has yet to be conducted in our country.

However, based on my observations, arbitration is used more commonly in our country. The use of mediation is increasing. Adjudication is also used sporadically in the construction industry.

Q. What obstacles do you see to the growth of ADR in this country? What challenges do you foresee arising in the near future? How can these issues be resolved?

A. I must admit that the promise with which mediation began in our country has not been fulfilled. There has been much discussion about encouraging the use of mediation in disputes, but little action has been taken. Not only mediation, but the entire concept of ADR has yet to be fully accepted by our legal community and people at large. We have not yet established a proper structure for institutional ADR.

Only a small percentage of the disputes that arise in our country on a daily basis are resolved through ADR. Because of the informal nature of ADR, a lack of publicity, and a lack of encouragement from legal professionals, the general public believe that ADR has not gained the desired momentum yet and is less effective than courts in resolving disputes as opposed to traditional litigation.

When you compare our situation to that of our neighbouring country, India, you will notice that they have gotten far ahead of us in terms of promoting ADR. I believe it is their unity, modern mindset, and determination to institutionalise ADR that has kept them ahead of us. For instance, the Bar Council of India (BCI) has made mediation a compulsory subject. All universities, centers of legal education have been directed to incorporate mediation as a compulsory paper from the academic session 2020-21. Their thought process is so far ahead of ours that they regularly invite experts from other countries to train interested individuals in ADR, whereas we rarely invite local experts to do so.

For example in 2020, I was invited to provide mediation training at the West Bengal National University of Juridical Sciences. People came from all over India to receive training, and I was pleasantly surprised by how enthusiastic they were about becoming arbitrators and mediators. It breaks my heart to see how little we are doing in comparison to them to prepare our students to be skilled arbitrators and mediators. Having said that, it is important to note that institutions such as the Bangladesh International Arbitration Centre (BIAC), ADR-ODR International, and the Chartered Institute of Arbitrators (CIArb) are playing an important role in developing the ADR mindset at all levels in our country, particularly among aspiring lawyers through promotional activities and training courses.

However, it is imperative that our law schools, chambers, and other relevant institutions urgently come together to discuss what they can do collectively to create more opportunities for the next generation in the field of ADR. I’ve always said this in various forums, and I’ll say it again today, that we need to make ADR thrive in order to free our courts from an enormous backlog of cases (the number of pending cases is now around 4 million) and resolve disputes more quickly.

To do so, we must not only change our pro-litigation culture and the perception of ADR, but also reform our LL.B. and LL.M. programmes so that ADR is included as a course and students receive adequate training in various forms of ADR before entering professional life. As the Head of Laws at the London College of Legal Studies (South), Bangladesh’s only Affiliate Center of the University of London, I have done everything within my authority to promote ADR and ODR (Online Dispute Resolution) in our country and train lawyers and legal academics on the subject with the assistance of my team. We have not only encouraged our students to learn about ADR and compete in various international ADR-ODR competitions, but we have also trained students from other institutions as well as practicing lawyers through the ADR courses that we offer in partnership with ADR-ODR international. We have so far trained hundreds of people in mediation, many of whom are now thriving as mediators. We are now looking forward to introducing courses on other forms of ADR. We have also formed working relationships with a number of renowned legal chambers in our country that work with ADR, and we send our students to do internships there.

We also held a number of webinars with renowned arbitrators and mediators, particularly during the pandemic, because we were unable to hold in-person sessions. But we could certainly have done more if the pandemic had not occurred and our normal flow of work had not been disrupted repeatedly by the recurring waves of the virus.

Q. Can the Commonwealth play a role in the growth of ADR here? If so, how?

A. The Commonwealth, as an association of 54 independent and equal countries, is undeniably a powerful body on the global stage, and it can thus play an important role in the development and nurturing of a more effective ADR system in our country.

Commonwealth countries have a similar legal history because almost all of us are former British Empire territories. As a result, most of us are heavily influenced by the common law legal system popular in the United Kingdom. These countries must work together to create a platform under the supervision of the Commonwealth where experts on ADR from each country can sit down, share their experiences, and make recommendations with the goal of promoting ADR not only in Bangladesh but also in other Commonwealth countries.

This will not only serve as a research hub, but it will also exert soft pressure on the relevant authorities in the respective se countries to act quickly in developing an effective ADR system and implementing necessary reforms.