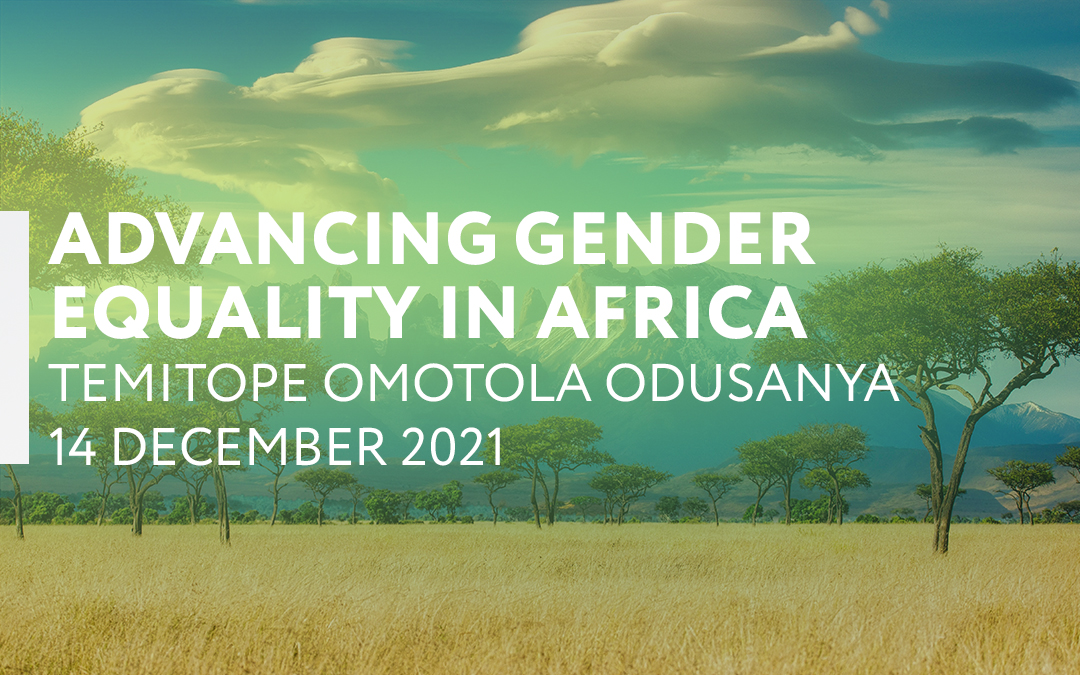 According to the World Economic Forum’s Global Gender Gap Report (2021), another generation of women will have to wait for gender equality. As the impact of the COVID-19 pandemic continues to be felt, the global gender gap has increased from 99.5 years to 135.6 years. In order words, this number will only reduce gradually, one day at a time, if actions are expedited now, today. Through the Sustainable Development Goals and Agenda 2063, both the United Nations and the African Union have set ambitious targets for advancing gender equality, improving population health, and strengthening national economies in the coming decades. These goals are deeply interconnected, as closing gender gaps is foundational to broader health and economic gains. Yet, it suffices to assert that there remains a large lacuna in closing the gender gap globally and especially in Africa, thus, the United Nations must move more from evidence to impact.

Gender equality has been thoroughly misconstrued in Africa. However, it should be clarified that gender equality does not undermine one gender and make the other weaker. Rather, it denotes that there should be equal opportunities for men and women and sex should not be a prerequisite for who should qualify for opportunities. Gender equality is not selfish; it is not a competition; it is not enmity; it does not mean men and women are the same! Gender equality is equity; it is reciprocity, mutuality of human rights. Gender Equality is Gender Equity. It simply means gender equality stricto sensu! That is 50:50 pro-rata as equality is not a respecter of gender! Despite the substantial progress made by the United Nations on the issue of gender inequality, it remains endemic in Africa and serves as the main challenge to human development. Gender inequality is a global issue as corporations agree that it is fundamental to sustainable business practices. Accordingly, there is a benchmark for international best practices which advocate for gender equality in the workplace. This has led several countries to voluntary interventionist methods as well as laws and codes of corporate governance across the globe to comply with the international benchmark. However, research shows that Africa, especially Nigeria, has not adopted this benchmark which has resulted in the lack of gender equality.

There is an avalanche of information on the “essence” of gender equality in a leadership position. Lord Davies asserted that ‘If you are a chief executive officer and you do not have gender equality… as a top issue, then you have been asleep at the wheel’. Jill Ader postulated that more voices are needed, the majority of these voices are those of women. Hillary Clinton also asserted that women account for a talent pool of untapped resources! Gender equality is a crucial factor in corporate governance and it is in tandem with international standard practice. This is also tantamount to the United Nations sustainable developmental goal, (SDG 5) to achieve gender equality and empower all women and girls. Yet, in Africa, inequalities prevail.

It is therefore against this backdrop that this article historically examines gender, culture, and hegemonies as factors for or against development in Africa. It has been revealed that culture and other aspects of society shape the lives and relationships of men and women in Africa. For example, a Yoruba proverb states: Gbogbo ẹkọti obirin ba ka ile idana lo pin si. That is, a woman’s education ends up in the kitchen. Akan proverb entrenches this idea when it says: “When a woman buys a gun, it is kept in a man’s room.” Such proverbs show that women do not have the capacity and ability to manage valuable property¸ an indication that they must play insignificant and subordinate roles to men with regards to property ownership.  These African proverbs have served as a major avenue for the continued perpetuation of gender discrimination among the Africans, and the exercise of male dominance.

For example, it is wrong to say “I have your type at home” or “women do not need a raise because they have rich husbands to cater for their needs” Poverty can and should arguably be alleviated through Gender equality. Revision of laws and books especially children’s books is also a necessity in bridging the gender equality gap. For instance, growing up, majority of my primary/secondary schools’ pieces of literature portrayed that a woman’s role is to feed and cater for the well-being of her family – there was a pictorial illustration in these books of the wives/mothers struggling in the kitchen, pounding yams (it was the standard ‘norm’) and sweating in the kitchen alone. Whilst also attending to the needs of her babies (depending on their ages) In addition to all that, the husband/father watched the football match, played games with friends or gist with friends and kept beckoning/calling the wife. Mother, women are indeed expert multi-taskers. Why then should they be relegated only to the home and family settings? It could be adduced that some of these skills are essential beyond the home and family life.

The novel “Things Fall Apart” by Chinua Achebe paints a vivid picture of the Igbo gender stereotype where a woman must be soft, subservient, weak, and gentle. The boy child is brought up knowing that he is not just superior to the girl child but ought to be superior and controlling. Illiteracy is a disease! We can only place value on what we desire. A woman is not a mere object, she is more than her shape or structure. Her shape does not determine who she is. These are some of the typical examples of our literature stories growing up and it is what we also see in our contemporary societies. Arguing that this is wrong and should not be the norm feels like a norm, sometimes society even condemns such activism as nonsense and being too western. Arguably, these are some of the root causes of the deeply embedded issues that plague us especially in Nigeria and Africa as a whole.

Imperatively, equality goes beyond socio-political correctness. McKinsey’s research shows that that “True gender balance would add up to a colossal 28 trillion dollars’ worth of economy to the global economy which is equivalent to both the US and China’s economies combined. Hence, there is a strong causal relationship between gender equality and economic prosperity as affirmed by Mckinsey’s Studies. What then is stopping the world from utilizing such an invaluable untapped pool of talents/resources? An attempt to answer these questions notwithstanding being rhetorical logically would be to reconsider the patriarchal argument extensively. Gender prejudice is another major consideration. Women are neither inferior to men nor the second/ subordinate /secondary sex. Thinking or asserting otherwise would amount to a part of the problematic marginalization and trivialization of women’s involvement in political activities evidenced in their relegation to cheerleading roles during political contests, and at best, merely voting male candidates.

Hence, gender, culture, and development in the African context should be reinforced and reshaped. Just as one cannot board a bus and expect it to fly, there must be a process, a method. Life is definitely in stages, hence we should celebrate the little wins while striving for more. The United Nations efforts cannot be sidestepped, yet there is the need to do more especially in Africa to effect a long-lasting and true change. Gender equality activism should truly be about less noise, more voices, and actions. Women are as effective in leadership as men; there is not anything that women cannot achieve.

Andrews Nathan, ‘A Woman Can Also Speak Out: Gendered Perspectives on Responsibilization’ (2019) Gold Mining and the Discourses of Corporate Social Responsibility in Ghana, 132.

Ortrun Merkle and Pui-Hang Wong, ‘It is all about Power: Corruption, Patriarchy and the Political Participation of Women’ (2020) Women and Sustainable Human Development, 368.