A Golden Opportunity for the Golden Crop 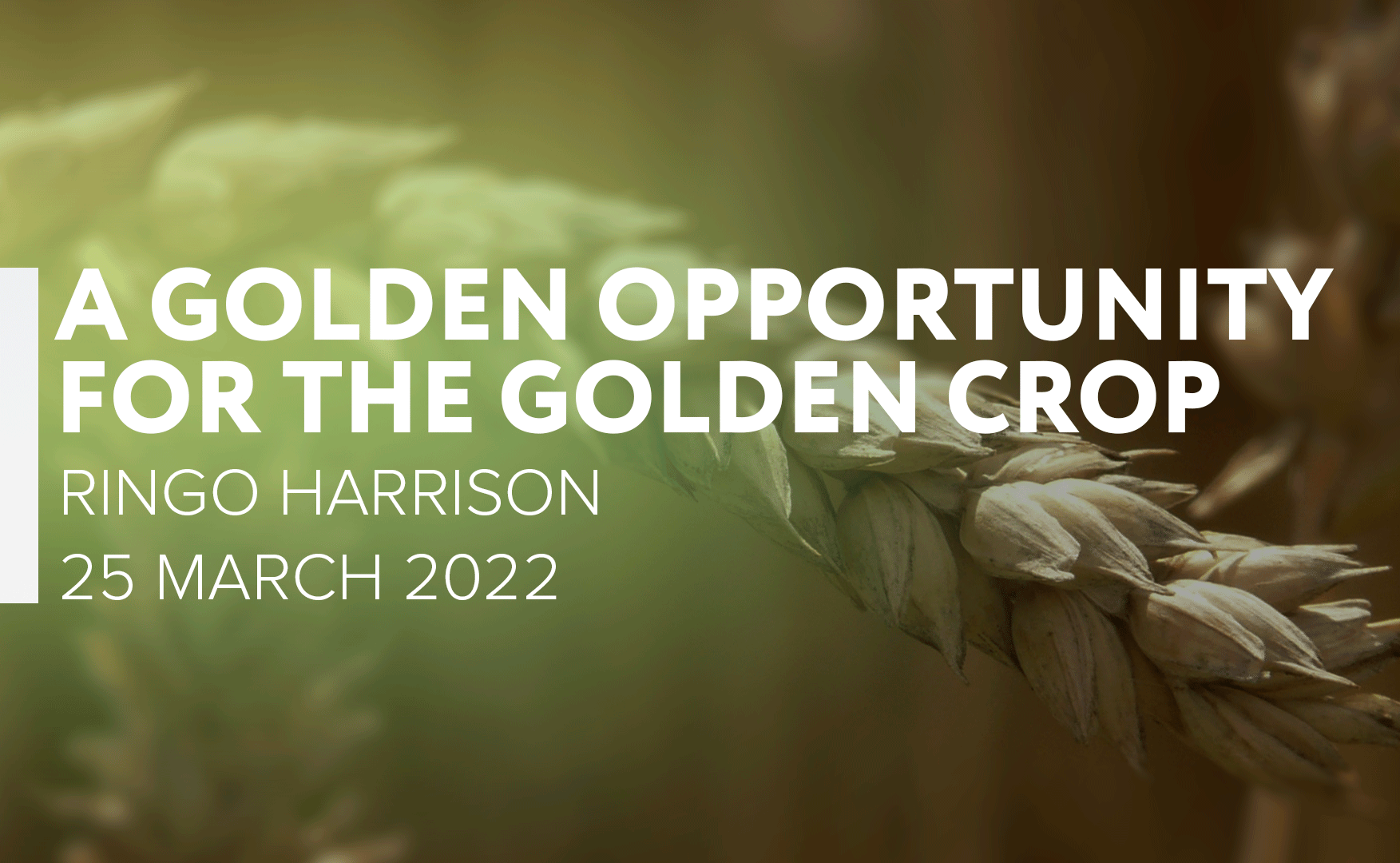 A Golden Opportunity for the Golden Crop

Every day, whenever I open up the agricultural commodities index[1], a little bit of nervous energy builds up to remind me that unpredictable times are ahead. And the moment I decide to  leave my flat to do my grocery shopping, the 1.5 kilo container of kimchi that used to cost 80 Hong Kong dollars (HKD) is now priced at 130 HKD. Upon seeing this price hike, it served as a cruel reminder that the inflation and supply chain crisis is still ongoing. But with most of the world recovering from the pandemic, the global community can rest somewhat assured that it is only a matter of time for all stakeholders to return to normal.

Unfortunately, such optimism turned out to be short lived and naive. The Russian invasion of Ukraine is another addition to and unstable global economy. Many people are already starting to feel the effects of the war with rising energy costs and sanctions making certain goods unobtainable and as time goes on, the costs will only increase and this is not just so for the countries boycotting Russia.

Perhaps most worrying of all is the fact that this war will increase food insecurity substantially. Together, Ukraine and Russia produce about 25% of total wheat exports globally[2]. Sanctions against Russia combined with the winter wheat in Ukraine looking to go unharvested, a global energy crisis, and increased insurance for cargo ships in the Black Sea, it is easy to predict what will happen to the price of these wheat exports. As of writing this article in 2022, the cost of wheat per bushel is 1070 USD in contrast to 640 USD at the start of 2021, and 555 USD in 2020 pre-pandemic times[3].

This is already evolving itself into a major issue for many developing countries. In Egypt, Russian and Ukrainian wheat exports account for 80% of their imports which are imported via the Black Sea[4]. While Egypt has a reserve supply that can last for 9 months, which is hopefully enough time for the war to resolve itself, the country has started looking to diversify not just their wheat imports, but also their carb consumption. Syria, a country that was once the breadbasket of the Middle East is almost solely reliant on wheat imports from Russia. As a result of the Russo-Ukrainian War, Syria has had to start rationing wheat[5] which will only make rebuilding the regime more costly and difficult. As any historian will confidently say, it is not grand ideals proclaimed by fiery eyed individuals that create revolution, it is bread.

It should go without saying that these are going to be difficult times ahead for many developing countries, especially ones in a crisis such as Yemen and Ethiopia and many other countries panicking to avoid a political crisis or food riots. However, such a gloomy outlook would probably be both overly pessimistic and inaccurate. For one, resilience against food insecurity is stronger than any other time in human history with food related health issues mostly being dominated by over-nutrition of calories combined with micronutrient deficiency[6]. This is in contrast to the 20th century where food crises were associated with the squalors of Calcutta at best and African famines at worst.

Secondly, the global wheat crisis can serve as an opportunity for many countries. Just like how Malaya got an economic boost during the Korean War in their rubber and tin industry[7], so can countries in Sub Saharan Africa and India during the Russo-Ukrainian War. India is already capitalising on this newfound advantage[8] with an estimate of 4 million tons of wheat estimated to be sold in the first half of 2022 compared to a total sale of 6.12 million tons of wheat in 2021. Indian wheat prices range between $305 to $310 but this crisis could prompt wheat prices to rise to $330 per ton. In addition, given India’s convenient location, it could bypass the danger posed in the Black Sea for wheat exports to countries such as Lebanon and Egypt by going through the Suez Canal.

In Sub-Saharan Africa, 60% of the population consists of smallholder farmers with only 23% of its GDP coming from agriculture[9], and it doesn’t help that the average age of farmers is 60 years old[10]  which is a good indicator of the kind opportunities the youth sees in agriculture as well as the global trend towards the cities and out of the farm. This could present an opportunity for many Commonwealth African countries, such as Kenya, Zambia, Tanzania and South Africa, to increase agricultural output by basically turning manual agriculture into agro-businesses. With many of the elderly farmers inevitably retiring or seeking less intensive farming, African countries can revolutionise agriculture and turn this into a viable career option for much of Africa’s growing young and educated workforce.

Growing wheat prices combined with many countries desperately seeking to diversify their wheat source away from the Black Sea means both governments and investors can play a key role in innovating their agribusiness sector and there are a number of ways to go about this. The first one would be to invest in mechanised agriculture. Most of the farming done in the African continent is non-mechanised and there is even evidence to suggest it could increase employment[11]. This would reduce the backbreaking labor associated with farming, increase output, and provide more employment in different aspects of agribusiness as a whole.

Secondly, governments should invest heavily in infrastructure. A fact that may surprise many about Africa is that African farmers are huge users of smartphone apps to conduct business[12]. Fintech has taken over much of business in not just agriculture, but all parts of life including transport although this fact makes many African countries an outlier as countries with achieving a developed cyber infrastructure before a physical infrastructure. Unfortunately, while the foundations of fintech may be available to most farmers, no amount of tech will ever be able to solve the most basic problems of getting goods from point A to point B[13].

These two solutions are most obviously easier said than done, but if global trends are an indicator of positive news, industrialisation and growth seems to be the norm for most countries with stagnation being the exception. The real policy nightmares often begin after agricultural industrialisation as seen with the two very different cases of Sri Lanka and India.

In India, while few would doubt the economic results of the Green Revolution, the state of its agricultural system leaves much to be desired[14]. The price floors reducing overall efficiency, the lack of incentives to produce crops other than wheat and rice, the environmental damage caused by soil degradation by anti-pesticides and fertilisers, and perhaps most horrifying of all, the cycle of debt in which farmers find themselves which has resulted in one of the most destabilising protests in Indian history. While few would probably doubt the effectiveness of mechanised farming in India, there is no doubt that any policymaker with a time machine would happily go back in time to redo the agricultural framework altogether.

Another solution that was proposed as part of the current zeitgeist regarding green energy is to go fully organic. While this was simply an idea often meant for the environmentally conscious, one country did go 100% organic and that was Sri Lanka. While the environmental and soil benefits of this scheme would have undoubtedly been an improvement for Mother Nature, this ultimately ended up being catastrophically wasteful and economically damaging to Sri Lanka as a whole[15].

Despite these worries, if there is a time for Africa to join the global export market, now is the perfect time. Even if Russia ends their war against Ukraine tomorrow, the sanctions placed by many OECD countries will undoubtedly last for years, possibly even decades to come. Even if Ukraine repels Russia from their territory, the damage from the war will take years to repair and the Black Sea is unlikely to become a safe haven for trade anytime soon. In a changing world with wealthy, hungry, and picky consumers, there has never been a better opportunity for the Commonwealth African nations’ agriculture than now.